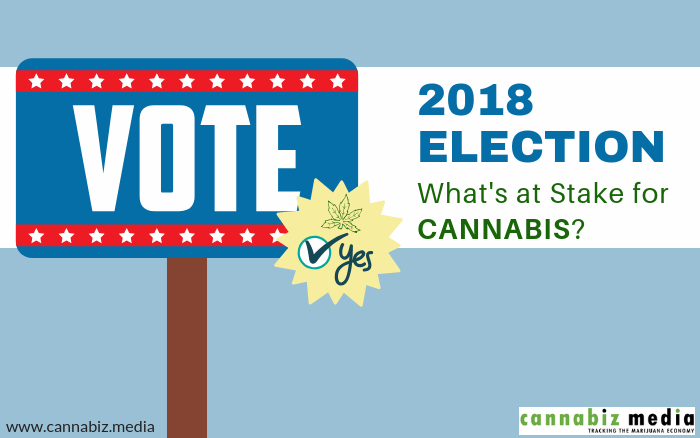 Today’s midterm elections will be a pivotal moment for the US Congress, numerous governorships, and state legislatures. Further along the ballot, the expanding cannabis economy once again faces a turning point. A handful of states’ voters will see ballot measures to legalize medical or adult-use cannabis; while voters in other states will see ballot opportunities to expand cannabis’ imprint.

Missouri voters are making a choice to expand the state’s existing medical cannabidiol program into a full-fledged medical cannabis program. At present, there are two licensed businesses supplying CBD to patients with only one qualifying illness: intractable epilepsy. The program will expand regardless of which proposal passes, but there are differences in the ballot measures, ranging from a full constitutional amendment to mere statutory changes.

Saint Louis Public Radio recently profiled the confusing set of options presented to the electorate, noting the passage of Amendment 2 would bring the state’s program and cannabis market most in line with other states’ present legislation and regulatory structures. On the flip side, the more controversial Amendment 3 would leave the state in a hands-off position, allowing a private organization to govern medical cannabis.

After a compromise between the Utah state legislature, Proposition 2 supporters and opponents, including the Church of Latter Day Saints, Beehive State voters will vote to create the state’s first medical cannabis program, which would replace the slow-to-implement medical cannabidiol program.

According to the Washington Post, backers of the ballot measure agreed to the compromise proposal because in Utah, legislators have the power to overturn statutory ballot initiatives with a majority vote. “If Proposition 2 passed without any agreement on next steps, patients may have been left waiting years to access legal medical cannabis,” said the Marijuana Policy Project’s Matthew Schweich in an October statement.

Michigan’s Proposal 1, if approved, would mark a major change since the state legalized medical cannabis in 2008, and the Wolverine State would be the first to legalize in the Midwest. Many Michigan cities have already decriminalized possession of cannabis, and the state has been slowly rolling out medical cannabis business licensing — with a handful of delays and bumps along the way. Recreational licensing would resemble California’s, in that microbusinesses would be allowed for smaller growers to sell products in onsite retailers. Other license types would include retailers, cultivators, and manufacturers.

Another major part of this legislation is the home grow plant count for all adults: the proposed limit is 12 plants per person, which is significantly higher than other states that adopted adult use legislation earlier. Municipalities would be able to ban business licenses.

In the Great Plains, North Dakota might make history as one of the more politically conservative states to vote yes on legalization. Measure 3, the Marijuana Legalization and Automatic Expungement Initiative, would be a surprisingly progressive measure. If passed, the measure would take effect next month and could positively benefit patients waiting for access under the state’s new medical cannabis program, which has faced a slow rollout after being approved in 2016. In both Michigan and North Dakota, these measures would apply to adults 21 years of age or older.

In some states, cannabis is on the ballot again, giving voters the opportunity to lift municipal bans or levy new excise taxes. In California and Oregon, numerous local measures are on the ballot, with the possibility to open up many new markets which previously disapproved cannabis land uses or business licenses. Meanwhile, Colorado’s Amendment X could benefit the state’s fledgling hemp industry. This amendment would remove the legal definition of industrial hemp, through its constitutionally-defined THC percentage, to allow the state to come into compliance with anticipated federal farm bill changes. The state’s cannabis (and industrial hemp) future rely on this voter-approved change.

Looking beyond the midterm election, some researchers and industry analysts are suggesting a state-level legalization slowdown is looming. Federal legalization, which could bring sizable market expansion, nationwide shipping, and international import/export, as well as larger scale criminal justice reform, is in the pipeline. At the same time, there are a few states left that are considered new and emerging markets with medical or adult-use legislation yet to be considered.