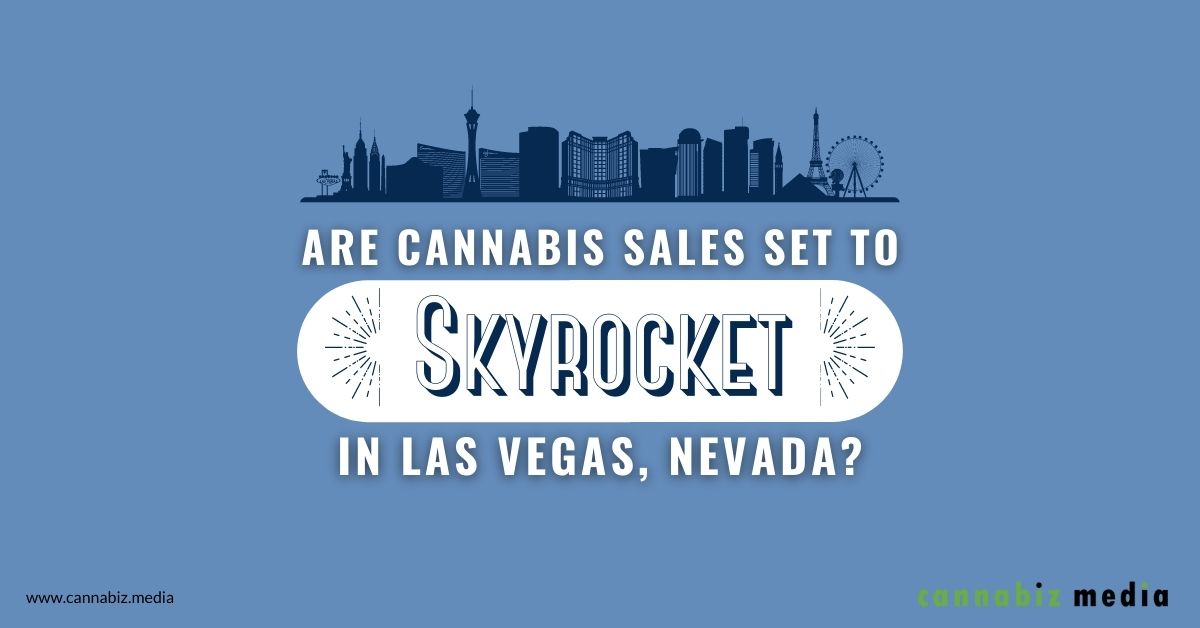 Are Cannabis Sales Going to Skyrocket in Las Vegas, Nevada?

Las Vegas, Nevada’s cannabis industry is highly reliant on the tourism industry, but the COVID-19 pandemic cut tourism by 50% in 2020. Fast-forward to October 2021, and tourism is picking back up. In fact, the cannabis industry is coming together in Las Vegas next month for the biggest annual event – MJBizCon – which will surely boost sales. However, cannabis sales from tourists are on the rise beyond MJBizCon, and a new state law that allows consumption lounges has many people in Las Vegas predicting that cannabis sales will soon skyrocket.

How did Las Vegas get here – on the precipice of skyrocketing cannabis sales and claiming the title as the cannabis tourism capital of the United States after COVID-19? The truth is a lot has happened in Nevada’s cannabis industry since November 2020. Let’s take a closer look at the past 12 months.

By the fourth quarter of 2020, most Las Vegas cannabis license holders had pivoted their businesses to address critical COVID-19 changes and requirements. For example, prior to the pandemic, deliveries were a smaller part of many Las Vegas dispensary and retailer operations. Both Curaleaf and Planet 13 dispensaries in Las Vegas told the Las Vegas Sun that they were making more deliveries than ever in December 2020 – about 1,000 per month for Curaleaf, which brought new growth to the company’s two Las Vegas dispensaries.

Prior to COVID-19, Planet 13’s Las Vegas dispensary relied on tourists coming to them for 85% of its sales according to the Las Vegas Sun, but at the end of 2020, it had 30 delivery vehicles. The dispensary built a local customer base and a robust delivery and curbside business. Drive-thru service and curbside pickup for cannabis dispensaries was approved in the state through an emergency order in May 2020, and the Las Vegas City Council made it permanent in March 2021. Planet 13 believes its sales will grow even more (on top of its local delivery business) when tourism is back to normal levels.

In January 2021, the Nevada cannabis industry got some bad news and bad press when a Cannabis Compliance Board report was released showing the racial inequity of the state’s license holders. According to the report, the majority of cannabis industry operators in the state, including Clark County’s Las Vegas, are white men age 34 or older.

Fortunately, the Clark County commission unanimously voted in August 2021 to allocate all revenue above $12 million to social programs every year. In 2021, it’s expected that nearly $6 million will be available to Clark County, which will be used to help those adversely affected by marijuana laws as well as to fight unlicensed cannabis sales.

Possession Penalties for Minors and Driving Under the Influence

In June 2021, Nevada Gov. Steve Sisloak signed legislation that lowered penalties for minors in possession of cannabis and revised the state’s cannabis DUI (driving under the influence) rules. The new law reducing penalties for minor possession went into effect on October 1st. It removes jail time and fines, caps community service to 24 hours, and requires offenders to attend a victim’s impact panel or undergo an evaluation to determine if they have a substance abuse disorder.

The cannabis DUI law changes the way traffic violations are handled in the state. Under the new law, driving with trace amounts of THC or its metabolites is no longer a per se violation of law in some circumstances. As a per se violation, it was illegal to drive a car with trace levels of THC or THC metabolites in a driver’s blood or urine, regardless of whether or not the driver showed any signs of impairment.

The problem with that law was that many research studies over the years proved trace levels of THC or its metabolites can appear in someone’s blood or urine when they are not impaired. As a result, people can test positive when they are not under the influence. The new law should help decrease the number of incorrect violations.

Consumption Lounges Could Be a Game-Changer for Las Vegas

Las Vegas already had a reputation as a cannabis tourist hot spot since it legalized adult-use marijuana in 2017. The problem was that tourists could buy cannabis in Las Vegas and throughout Nevada, but there was nowhere for them to legally consume it. The law made it illegal to consume cannabis anywhere but inside a private residence, which left many tourists with no options. As a result, the Vegas Strip has become inextricably connected with the smell of cannabis as both tourists and locals smoke it publicly on the streets.

The solution to the problem and potentially a game-changer for Las Vegas is the consumption lounge license. Gov. Steve Sisolak signed Assembly Bill 341 into law on Friday, June 4, 2021, which gave the Cannabis Compliance Board the authority to license and regulate cannabis consumption lounges. The new law is expected to draw more tourists to Las Vegas as a cannabis-friendly city and the cannabis destination.

Two types of business licenses will be offered for consumption lounges in Nevada:

The Cannabis Compliance Board will determine what cannabis products can be consumed at lounges and how much, but only cannabis products purchased at the lounge will be allowed. Alcohol will not be allowed at any lounge. In terms of location, lounges will not be allowed to open within 1,000 feet of a school, 300 feet of a “community facility” or 1,500 feet from a business with a non-restricted gaming license.

The Cannabis Compliance Board expects to start issuing licenses in the first half of 2022, but a state license is just the first step. Owners will also have to obtain a local license from the municipality where they plan to open a lounge. This shouldn’t be a problem in Las Vegas where Clark County Commissioner Tick Segerblom has said he will work with the county to ensure its ordinance aligns with the state so consumption lounges can get up and running quickly.

What a Difference a Year Makes for Cannabis in Las Vegas

From climbing out of pandemic challenges to preparing to launch consumption lounges, the past year in the Las Vegas cannabis industry has been filled with both challenges and opportunities. Only time will tell for certain, but heading into 2022, the city’s industry looks well-positioned to become a popular cannabis tourist destination where cannabis sales are likely to skyrocket.