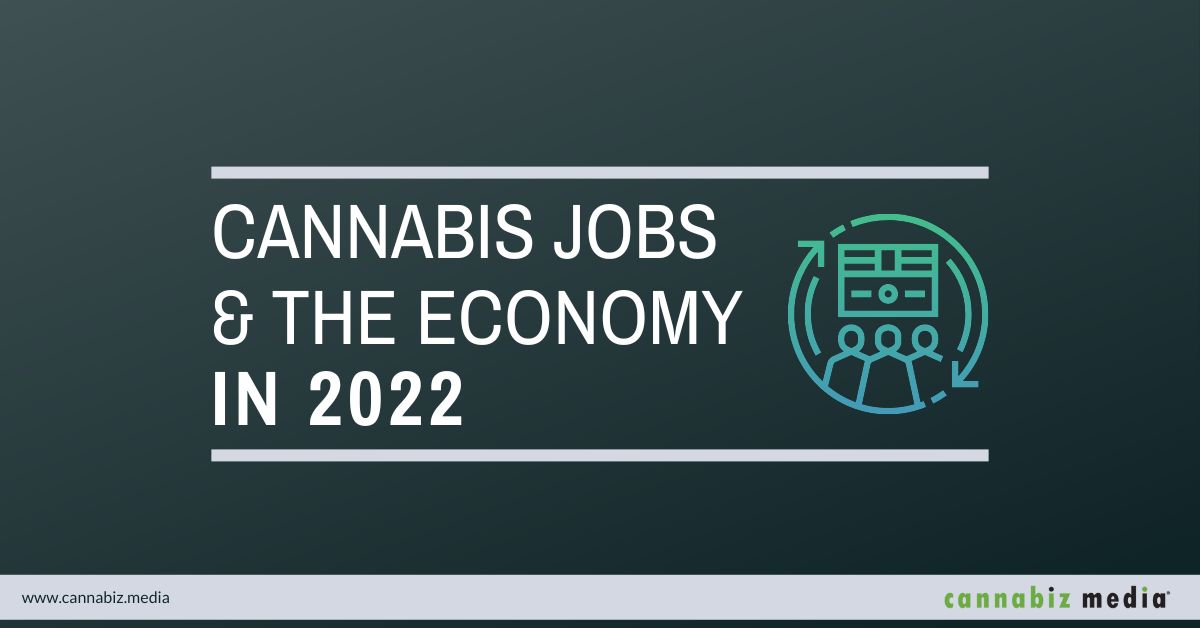 Cannabis Jobs and the Economy in 2022

Just five years ago, in 2017, the legal cannabis industry in the United States employed 122,800 people. As of January 2022, there were 428,059 legal cannabis jobs according to the 2022 Leafly Jobs Report, which was published in partnership with Whitney Economics.

The number of people working in and with the cannabis industry has risen every year since Leafly started tracking the data five years ago. Between 2021 and 2022, the industry added 107,059 jobs – a 33% increase over the prior year.

The Cannabis Job Market in 2022

According to Leafly’s research, states with the highest number of cannabis jobs include California, which has nearly 120% more cannabis jobs than the next top state, Colorado, Michigan, Illinois, and Massachusetts – in that order.

Of course, the number of cannabis jobs in a state depends on multiple factors, including whether the state has legalized both medical and adult-use cannabis, the maturity of the state’s cannabis market, the number of active licenses across the supply chain, and the number of potential consumers.

Leafly predicts that in 2022 and 2023, cannabis sales will grow the most in New Jersey (74%), Illinois (58%), and Pennsylvania (57%). Other states that have significant opportunities to increase cannabis jobs in the near future include Arizona, California, Connecticut, New Mexico, and New York.

Cannabis job salaries are also increasing. According to CannabizTeam’s 2022 Cannabis Industry Salary Guide report, cannabis salaries rose an average of 4% in 2021, and compensation for senior executives increased by as much as 10%. In fact, salaries rose for all of the jobs researched by CannabizTeam across cultivation, extraction, testing, manufacturing, distribution, retail, sales, marketing, accounting, finance, administration, legal, human resources, and compliance.

Roles that saw the highest median increase in salary (10%) across the United States between 2021 and 2022 include VP of Product Development (manufacturing) and Chief Marketing Officer (marketing) followed by a salary increase of 9% for Chief Revenue Officer (sales).

It’s important to note that salaries vary a lot between roles and from one state to another. Vangst’s 2021 Salary Guide (published in March 2022) reports that its researchers found salaries can range from $14 to $22.50 per hour for trimmers and post-harvest workers at a licensed cultivation facility to $85,000 to $160,000 for a director of cultivation.

Similarly, packagers working in a manufacturing facility could make $14 to $20 per hour compared to $140,000 to $185,000 for a vice president of manufacturing. Budtenders working at a licensed retail or dispensary location could make $14 to $25 per hour while the vice president of retail operations for a retailer or dispensary makes $120,000 to $200,000. For delivery jobs, drivers, customer service agents, and warehouse workers make between $17 and $21.

Cannabis Jobs and Effects on the Economy

Whitney Economics reports that total cannabis sales in 2021 totaled nearly $25 billion. That sales figure is expected to nearly double within a few years, and the number of jobs created to support those sales – and everything leading up to and after a sale is made – will grow as well. Leafly predicts that the total forecast for cannabis jobs when the legal US cannabis market matures will be between 1.5 million and 1.75 million jobs.

Based on those numbers, it’s clear that the potential for the legal cannabis industry to infuse money into local economies is significant. As sales grow, business revenues increase, more employees are needed, workers incomes and spending power increases, and economies thrive.

There is no doubt that economies will benefit as the cannabis industry – and the associated job opportunities – continue to grow. Bottom-line, states where markets have the most potential to expand and grow as well as markets where large illegal operations continue to thrive (i.e., where there are big opportunities to shift illegal sales to the legal market) are the ones to watch. Through further legalization and efforts to eliminate illegal markets, these states could add enormous amounts of jobs and revenue to their economies.

What’s Next for Cannabis Jobs and the Economy

Several states have cannabis-related ballot measures up for vote in November, and President Biden recently started some movement at the federal level that could help the cannabis industry, cannabis jobs, and the economy in the future.

In the meantime, the cannabis industry has withstood the COVID-19 pandemic and the Great Resignation. It’s safe to assume job growth will continue for the foreseeable future, and with it, will come many benefits to local economies.