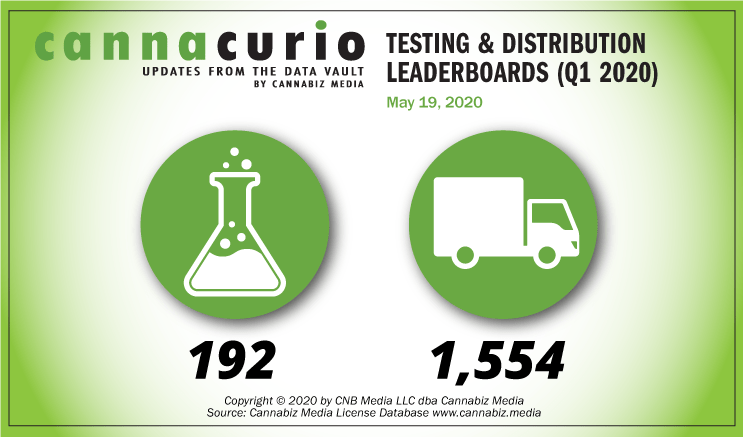 In this week’s post we wanted to highlight testing and distribution licenses; two activities that do not receive nearly as much attention as dispensaries, manufacturers, and cultivators.

We started the year with 163 testing licenses across 24 states. These licenses typically permit a testing license holder to conduct lab tests on different marijuana products or flower. There are a wide variety of testing schemes across the country. In some states – the state does the testing while in others it is regulated by an entity distinct from cannabis. For example, in Colorado the MED issues all the licenses including separate licenses for medical and adult cannabis testing. In Connecticut a Controlled Substance License is required and it is issued by the Department of Consumer Protection. In New Jersey the Department of Health and Senior Services does the testing. In still other states a lab needs to have a certification from an accrediting body and that will suffice. Cannabiz Media only tracks state-issued licenses. Here’s the leaderboard:

In reviewing the license holders nationwide we found 43 of the 190+ licenses owned by 11 companies. Steep Hill Labs had the most licensed locations:

As we pointed out earlier this year cannabis distribution serves as a business-to-business delivery license. In the few states that have these licenses, they serve as the link between license holders as cannabis moves along the supply chain. These licenses are most prevalent in California. Other states that have them include Colorado, Michigan, Nevada, Oregon, Puerto Rico, and Washington. In our review of California Microbusiness licenses we found that 97% of the license-holders opted to have Distribution as one of their permitted activities.

The preponderance of these licenses exists in states with mature programs that include recreational cannabis. As we observed earlier this year, OK and MI have been adding licenses and Missouri’s pending licenses will come online before too long. The fact that it is emerging in newer markets like OK and MO could signal that new states may include this in their proposed schemes as it does provide fee revenue. However, some states will face criticism for trying to create a multi-tiered model similar to alcohol regulatory schemes.

The Golden State added to their lead in the first four months this year:

Cannabis Business Telemarketing and Robocalls – How to Stay out of Trouble