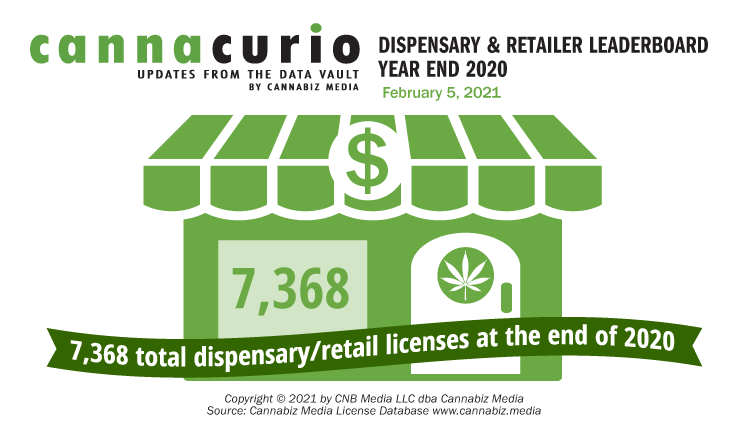 Since starting the Cannacurio series last year, the leaderboard blog posts have garnered a significant amount of interest. We have been crunching and adjusting the numbers to show what happened in 2020 and focused on the total number of active licenses in effect because this view takes into account terminated and non-renewed licenses.

The surprising find was the shrinkage of licenses in Oklahoma. The Sooner State started the year at 2,238 and added 565 new licenses over twelve months, but they ended the year at only 2057. Odder still since they awarded 565 licenses throughout the year. Oklahoma’s OMMA has been forgiving with grace periods on renewal dates, so we will monitor this closely in 2021.

The dormant states added a grand total of 7 licenses / 15% growth; 183 for the mature states, which is a 9% increase, and an astounding 2,124 new licenses for the growth states at 226%. If we removed Oklahoma from this list, the growth would have been 409%!

2021 promises to be another year of license growth in some markets. Arizona unleashed 102 new retail licenses to existing dispensary license holders while West Virginia published their list of 100 permitted dispensaries. In my last Cannacurio post, I highlighted states with new or expanded programs where we are likely to see even more licenses, so stay tuned for another growth year.