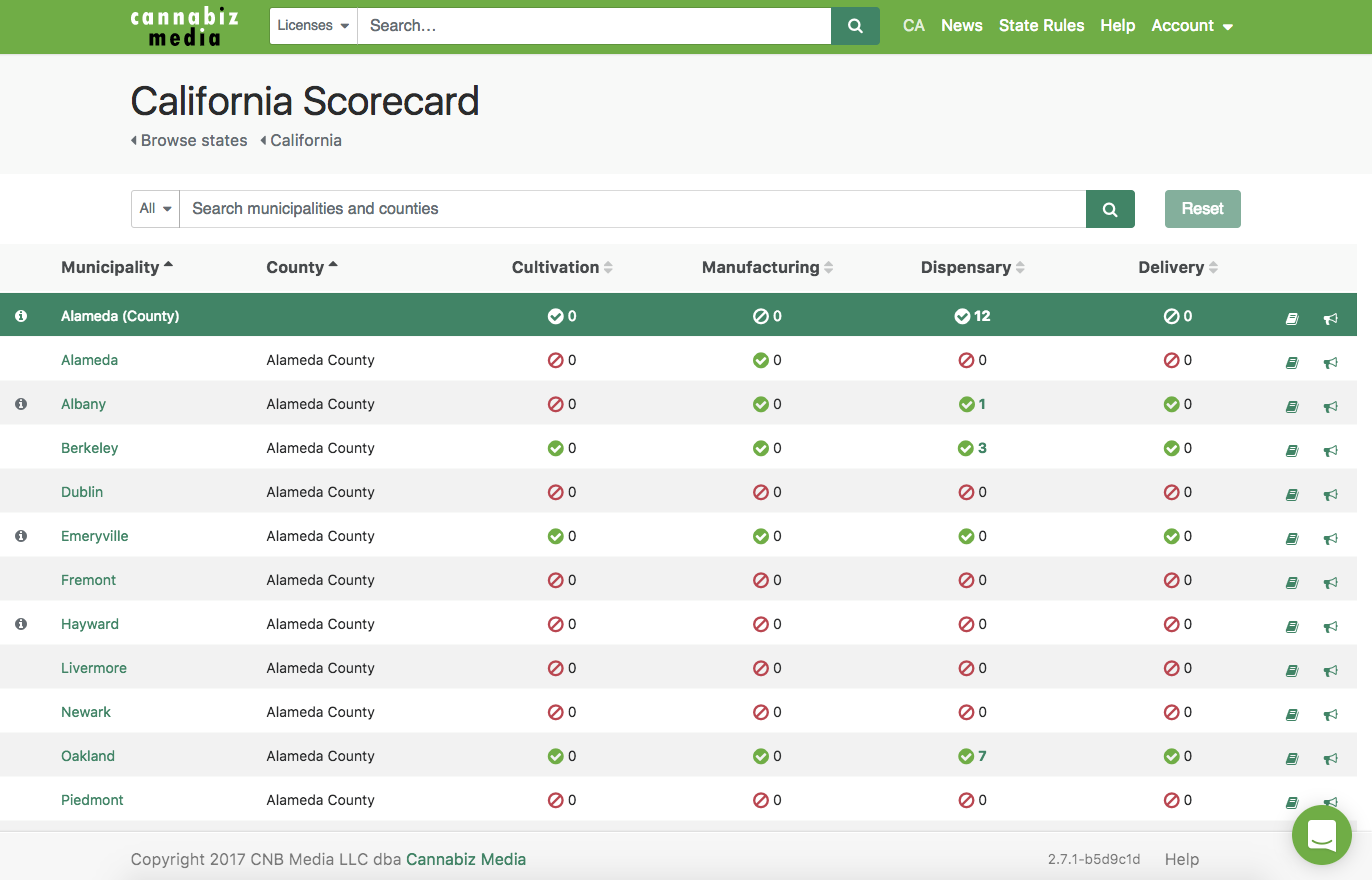 The Cannabiz Media Research team completed an exhaustive review of California, and we're excited to launch the California Scorecard. This new Scorecard identifies which municipalities have banned commercial cultivation, manufacturing, dispensing, and delivery. The team found bans are extensive throughout the state, which will have significant implications for the state’s licensing roll-out as business owners need a local permit or license to apply for a temporary or permanent state license. To facilitate your business’ competitive and sales intelligence, we have overlaid the number of permits in our database so you can optimize your on-the-ground efforts.

As shown in the image above, you'll be able to search by county or city for the municipalities you're looking for. A green check means the activity is permitted while the red ban symbolizes that the activity is not permitted. Occasionally, we may show permit counts adjacent to a ban, which may mean that the permits are grandfathered.To further your research, we have provided links to local code when available as well as a mechanism for you to alert us when records might need updating.

Our team spent countless hours researching the municipal codes of various jurisdictions as well as ordinances and news articles associated with each municipality. We also followed up with many Freedom of Information Act requests in non-banned localities so we can provide up to date information on the number of applicants and permit holders.

We continue to monitor these counties as many of the moratoriums are finite. We believe the number of bans will decline over time though some will remain. In Oregon, the list of banned municipalities has 93 entries even though medical marijuana was legalized in 1993.

This information is constantly changing as zoning boards, sheriffs, town councils, and other municipal rule-makers hold listening tours, schedule meetings, cast votes, and enact moratoriums. We'll update the California Scorecard as changes warrant. If we’ve missed something, drop us a note at ekeating@cannabiz.media, and we’ll look into it.

There were many reasons cited for bans that included environmental impact, odors, risk of burglary, robbery, armed robbery, violence, excessive use of electricity, and increased use of municipal services. Other municipalities seemed to be taking a wait and see approach as they assess how well the licensing roll-out goes at the state level. Some cities, like San Diego, are comfortable being “first to market” – time will tell if there are any “fast followers”.

Dispensaries were the most banned activity, and this is no surprise to industry watchers. These businesses interact with the public, tend to be in downtown areas and require parking, security, and other municipal services. The further up the value chain you go to manufacturing and cultivation, the easier it is to tuck these businesses out of site. The same goes for delivery services – they are tolerated because they keep marijuana discreet.

The county bans affect the unincorporated areas in the county, and cities have their own sovereignty and can make their own decisions. For example, Kern County and 10 of its 11 cities have banned all commercial marijuana activities. That leaves California City as the sole purveyor in the whole county. As a result, California City will also be the sole beneficiary of a lot of marijuana sales and the tax dollars that follow.

Based on our research, here are the counties you’ll likely want to avoid:‍

The following table shows the number of bans that exist in each county:

‍We look forward to your feedback on the California Scorecard. We will be monitoring developments through the end of 2017 and beyond, so please send us any suggestions as to how we can improve this part of the Cannabiz Media Database.