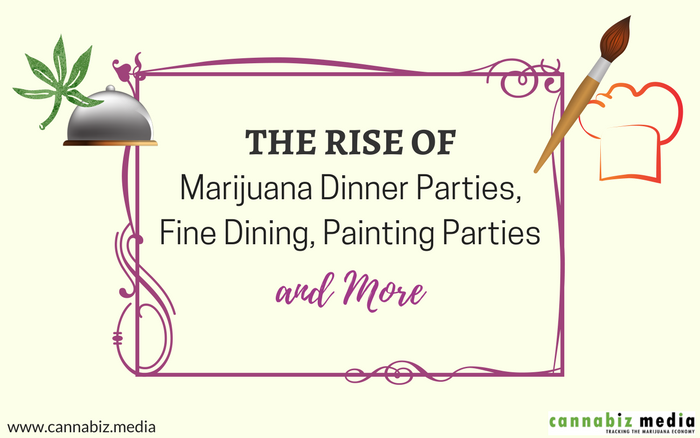 Two out of three Americans (66%) support legalizing cannabis according to Gallup Poll data . This growing acceptance, combined with the growth of the marijuana industry and the approval of adult-use cannabis in 12 states (including the District of Columbia), has launched a wide variety of innovative cannabis businesses across the country.

Creative entrepreneurs are bringing marijuana into new markets faster than ever. From fine dining, private dinner parties, wedding planning, painting and pottery parties, travel and tourism, writing classes, and more, cannabis is taking center stage as savvy business owners find ways to elevate the perception of marijuana while focusing on the social aspect inherent in marijuana products and experiences.

Let’s take a look at some of the new types of businesses that have launched in recent years in the cannabis industry.

Marijuana dinner parties and fine dining aren’t new. For years, highly-trained chefs have been holding invitation-only marijuana dinner parties and fine dining experiences in secretive locations. Even in states that have approved recreational marijuana, laws typically don’t allow these types of parties, but that hasn’t stopped chefs and diners across the country from indulging in them.

In Massachusetts, Eat Sacrilicious formed as an events company focused on elevating the cannabis fine dining scene in New England. To circumvent laws that prohibit cannabis dining events, guests are charged $225 which includes the meal, a cocktail reception, and a membership to Eat Sacrilicious. The membership adds guests to the company’s email list and gives them access to client-only events and priority access to tickets in the future. Using this business model, Eat Sacrilicious doesn’t sell cannabis. Instead, it sells an experience and offers the cannabis as a gift.

In California, the popularity of marijuana dinner parties and fine dining experiences is growing fast. Some of the biggest names in this new market in the state include Chris Yang of PopCultivate whose five to six-course dinner parties cost $100 per person and Sevan Abdessian and Kris Morningstar of The Gathering whose $250 dinners include five courses.

In Los Angeles, Christopher Sayegh holds private cannabis dinners for as much as $500 per person through his company, Herbal Chef. His dinner parties are usually 10 courses but could go as high as 25 courses. The Herbal Chef services high-profile investment dinners, business catering, large-scale catering (events, weddings, festivals, and so on), private dinners for 2-50 people, and meal preparation for health-conscious customers. Luke Reyes of Oh Man! serves $100 per person pop-up cannabis dinners and plans to open an Oh Man! restaurant in downtown Los Angeles.

In Malibu, Holden Jagger of Altered Plates hosts chef-grown five-course cannabis dinners that cost as much as $500 per seat. He’s also opening an outdoor dining event space in the Malibu Hills where he’ll serve meals prepared from the ingredients he grows in his own gardens, including his cannabis garden.

In San Francisco, Coreen Carroll launched Cannaisseur Series, which is a series of monthly dinner events featuring three or four courses. Also in the City by the Bay, Michael Magallanes of Opulent Chef offers private cannabis dinners that start at $150 per person.

Each of these chefs creates their own dishes and experiences, but the majority of them share something in common. They’re well-educated and/or well-trained. They graduated from culinary schools like the Institute of Culinary Education, Le Cordon Bleu College of Culinary Arts, and the San Francisco Cooking School. They’ve worked for top chefs like Tom Colicchio, Wolfgang Puck, and Neal Fraser, and they’ve cooked at prestigious (and often Michelin-starred) restaurants like Craft, the Soho House, and the Ritz Carlton in California and 11 Madison in New York.

Clearly, marijuana dinner parties and fine dining are still happening somewhat “underground” due to current regulations, but that hasn’t stopped them from becoming more common. In fact, there are even websites dedicated to listing and promoting cannabis-related events, such as Grassfed, which produces cannabis themed pop up events and facilitates private events with its cannabis bars.

However, changes could be coming to some parts of the country. West Hollywood, California released a list of eight businesses that it approved to operate edibles-only consumption area cafes and eight businesses approved for consumption lounges where cannabis smoking, vaping, and edibles can be consumed. The city spent seven months screening 300 applicants including Lowell Farms: A Cannabis Café owned by Chef Andrea Drummer who has been holding high-end cannabis dinners for some time. Each approved business has to get a West Hollywood business license before the end of 2019 and find a physical location before they can start operating.

In Las Vegas, Nevada, the cannabis travel experience is elevated when travelers stay in a luxury 420 Condo, located just steps from the Vegas strip. Travelers to Portland, Oregon can stay at the Jupiter Hotel. It offers a cannabis-friendly package deal (in collaboration with Dope Magazine), which includes a discount to local dispensaries, a vape pen, and a munchie kit.

For travelers looking for cannabis-friendly hotels, bed and breakfasts, and other lodging, BudandBreakfast.com is the Airbnb of the cannabis industry. Here, people can search for property rentals throughout the United States.

There are more ways to share the social experience of marijuana than over a meal, and that’s exactly what many entrepreneurs are tapping into with creative new markets. For example, Colorado Cannabis Tours has launched a variety of parties that visitors to the state (and even residents) can enjoy with marijuana.

The company’s Puff, Pass & Paint; Puff, Pass & Pamper; and Puff, Pass & Pottery parties combine creative activities – painting, making cannabis-infused skin products, and ceramics – with marijuana. Attendees are encouraged to, “indulge in the Mile High City’s finest cannabis products,” while they complete the activity. Parties are two hours each and range from $49 to $65.

Cannabis-friendly weddings are growing in popularity, which means there are many entrepreneurs jumping into the niche market. Both the Love & Marij and Cannabride websites offer wedding planning help to brides and grooms in Colorado, Oregon, Washington, Nevada, and Alaska.

For couples in Colorado and California who need help planning all of the details of their weddings, Irie Weddings and Events offers cannabis-friendly wedding planning and event planning services. This can be extremely helpful to stressed couples, particularly as ‘bud bars’ are gaining popularity at events. At the bud bar, wedding guests can consume marijuana in a variety of forms.

In Colorado, Nevada, and California, the Cannabis Wedding Expo introduces couples to a variety of companies that can provide products or services for their wedding days, such as High End Transportation, which picks up wedding guests at the airport and takes them to sample cannabis products, and Buds and Blossoms, which creates bouquets and ‘budonnieres’ for the big day.

There is a $49 writing class called “Lit on Lit” where writers can, “explore the THC-induced writer within yourself.” In the cooking classes, which range from $89 to $149, students learn how to make their own edibles, and in the $399 2-day glass blowing class, students learn how to melt and bend glass and actually make a functional pipe.

What New Markets are Next for the Cannabis Industry?

The cannabis market is still young, and there are so many opportunities for innovative thinkers with entrepreneurial spirits to join the industry in niche markets.

While there are legal issues that can create obstacles for marijuana market growth, you can learn from what other entrepreneurs are already doing to operate within the law while offering the types of cannabis experiences that consumers want.

As laws continue to evolve and the cannabis industry is further legitimized, it will be interesting to see more of these creative businesses emerge.