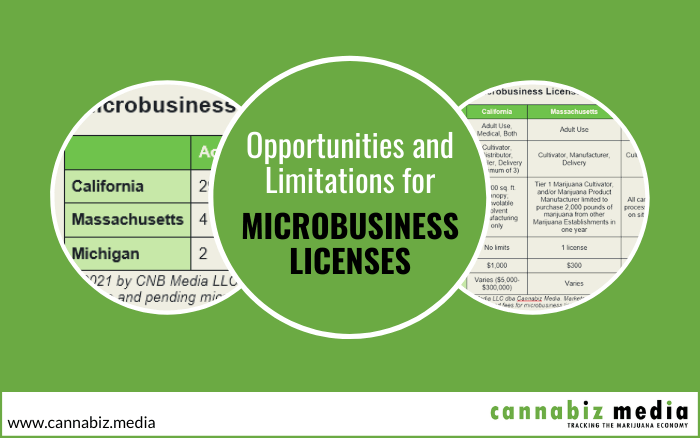 Opportunities and Limitations for Microbusiness Licensing

Of all the license types available to cannabis business operators, the microbusiness license is among the least issued and discussed. Countless cannabis businesses of varying sizes are vertically integrated, with many holding licenses for multiple activities at the same location. Depending on state and local regulations, licensees frequently choose to cultivate, process, and sell cannabis out of the same business.

Microbusiness licenses offer a unique opportunity in the industry, but not without caveats. While the goal of achieving thriving craft cannabis is a continuous challenge for the industry, restrictions on canopy size, production capacity, and business structure may make microbusiness ownership difficult.

This article will explore the opportunities and limitations for microbusiness licensing in the three markets currently allowing this business type – California, Massachusetts, and Michigan.

California and Massachusetts established this new license type after voters approved legalization ballot measures in 2016, with Michigan following in 2018. This is noteworthy as Massachusetts and Michigan’s microbusiness licenses are not considered part of the medical cannabis program infrastructure. California allows for medical microbusiness licensing — offering an opportunity in the many communities which remain unfriendly to adult use businesses and sales.

California’s transition from a gray market to a licensed one began with attempts to regulate medical cannabis (2015) and voter-approved adult use legalization (2016). Mandatory licensing launched in early 2018. At that time, some patient collectives and dispensaries opted to pursue a state license as a microbusiness with on-site cultivation, manufacturing, and/or distribution, instead of licensure as a standalone retailer.

As Cannabiz Media’s Ed Keating wrote in a California microbusiness Cannacurio last spring, activities include limited cultivation and manufacturing, distribution, retail, and delivery. At that time, nearly three-quarters of licenses were authorized to engage in three activities — the state’s minimum — and distribution and manufacturing were among the most commonly occurring choices.

These small businesses have cultivation limitations (a 10,000 square foot canopy maximum) as well as manufacturing limits (non-volatile solvents only), as shown in the table below. The application fee is the same as other Bureau of Cannabis Control licenses, while renewal fees vary on a sliding scale based on gross annual revenue. Since the market’s launch, California has remained the leader in microbusiness licensing, with nearly 300 currently operating.

As for inventory transfer, Massachusetts allows product to come from outside sources (other businesses), while Michigan mandates microbusinesses operate as closed facilities – all cannabis sold must be cultivated and grown on-site. This is a major departure from California, which allows these facilities to distribute cannabis products statewide via distribution authorization.

Additionally, Massachusetts does not permit microbusiness license holders to engage in on-site retail, but delivery will be an option for these operators later in 2021.

Given the limitations on production and sales, this license type is clearly not suitable for many businesses in the industry. Expanding and ascendant multi-state operators (MSOs) are unlikely to pursue an application for a microbusiness, at least given the current limits in a few states. Smaller-scale producers seeking to limit the complexities of holding multiple licenses may be the best candidates for microbusinesses.

As most states’ cannabis regulators require local authorization prior to license issuance, local objections and concerns over site placement may be a barrier during the local approval process. Zoning and land use restrictions in some communities may not yet reflect the microbusiness license requirements. Many communities have limited cannabis cultivation and processing, while allowing retail in different zoning classifications — which may make some communities unsuitable.

Additionally, operators who have expansion in mind, including multiple locations, may choose to bypass the microbusiness license in favor of more traditional retail and cultivation facility licenses.

The Future of Microbusinesses

Legalization and market expansion has picked up since the 2020 election. Earlier this week, New Jersey crossed the finish line and completed legalization, and microbusinesses will be an opportunity for aspiring small operators in the state.

Elsewhere, a legislative proposal in New Mexico could make microbusinesses one of the most dominant license types in a future adult use market, if the legislature legalizes this session.

The microbusiness license may be a new opportunity for small players in other states in coming years.