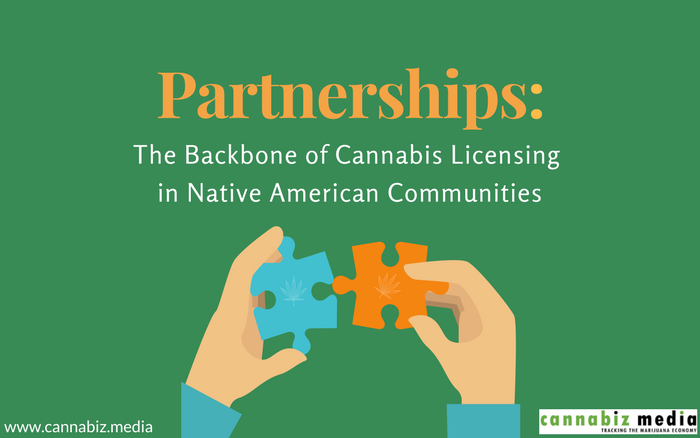 Partnerships: The Backbone of Cannabis Licensing in Native American Communities

Over this past summer and into this fall, numerous cannabis industry developments occurred throughout Indian Country. Interestingly, most of these developments are in the Western United States—states with both medical and adult use legalization; while some states are facing new adult use regulations after voters enacted ballot measures during last year’s election. Partnerships are a major force behind these business developments, either between the tribe and the state, or the tribe and privately held companies.

With market projections reaching into the billions looking to 2018 and beyond nationwide, some tribes may cash in quite successfully.  A recent OZY report highlighted the potential windfall of $100 million for one Nevada tribe’s dispensary, and other tribes are seeking to do the same. Here’s an overview of some major projects going on throughout Indian Country:

One Southern California tribe is quickly moving forward to enter the cannabis industry as a developer. The Iipay Nation of Santa Ysabel has been remodeling its now-closed 35,000 square foot gaming hall and casino into a new endeavor–the Santa Ysabel Botanical Enterprise Facility. The San Diego Union-Tribune reported this spring that greenhouse construction was underway, with some tenants already lined up. The tribe has confirmed they are not operating in a cultivator, processor, or retailer manner–they are only operating as developers and regulators. The Santa Ysabel tribal Cannabis Regulatory Agency and Cannabis Commission will work to regulate partner-tenants, and leaders have indicated their interest in permitting only medical cannabis facilities. No recreational licenses are on track to open at the facility in 2018. One of the earliest tenants at the Botanical Enterprise Facility was CannaSafe Analytics, an ISO-accredited testing lab.

The Silver State has already begun adult use cannabis sales via the existing medical market under the “early start program” while regulations are developed, which will be finalized in 2018. One recent policy development in Carson City was Governor Brian Sandoval’s signing of tribal cannabis compacts with three Nevada tribes over the summer. Indian Country Today reported new compacts with the Las Vegas Paiute, Yerington Paiute, and Ely Shoshone tribes. In addition to sales, tribes will begin cultivation, manufacturing, testing, and distributing medical cannabis patient cards with reciprocity within Nevada.

The state’s Confederated Tribes of Warm Springs is working on an intergovernmental agreement with the State of Oregon to participate in cultivation and manufacturing, while cannabis products will be transferred to off-reservation retail locations. The tribe’s cannabis project broke ground on a 15,000 square foot outdoor cultivation last year, and the project aims to have a low environmental impact–including low water use and limited artificial lighting. The state and tribe are continuing to determine how product will be sold throughout the state, and how sales taxes will work.

Earlier this year, this project was discussed in the Portland Mercury’s “Ask a Pot Lawyer,” which noted the tribe’s referendum. As Oregon measure 91 did not apply on the reservation, a ballot measure to permit cultivation was held–with 86% approval.

Washington state’s tribes were early players in the cannabis economy. After Initiative 502 passed in 2012, Washington state established a series of cannabis compacts, initially with two tribes. The Suquamish Tribe and Squaxin Island Tribe were the first two to sign ten-year agreements, similar to gaming compacts, in late 2015. Subsequently, the Puyallup Tribe and the state reached the third agreement, and now, almost ten tribes are in talks with the state Liquor and Cannabis Board, or have already made compacts of their own.

One summer headline in Seattle’s The Stranger stood out: The Puyallup Tribe Is Running the Pot Lab of the Future. Medicine Creek Analytics, an operation of the Puyallup Tribe, is the state’s only licensed cannabis testing lab that exceeds I-502 standards and meets ISO 17025 standards required by the federal government for testing labs. The tribe’s agreement also includes production and retail sales. Other tribes are preparing operations for cultivation and retail sales.

As the cannabis industry evolves and expands nationwide, more tribes are likely to enter the market. Tribes and states will continue to establish their relationship as entities participating together in the cannabis economy, while tribes may also establish new relationships with other tribes, outside companies, and even foreign investors. As some states, including California and Nevada, are still undergoing rulemaking processes, deeper conversations will occur to settle details such as taxation as well as seed-to-sale product tracking. Other market participants, including retail shops interested in selling tribal-produced cannabis products, will need to keep an eye for regulatory bulletins and industry news. Next year will be an exciting time to watch these ongoing developments unfold.