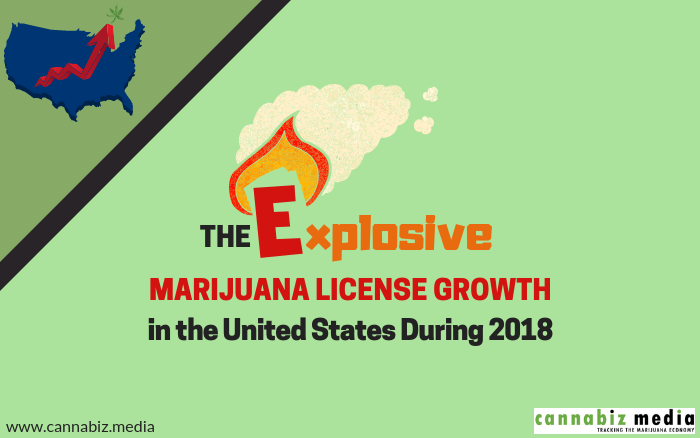 The Explosive Marijuana License Growth in the United States During 2018

The marijuana industry grew exponentially during 2018, with the total number of active marijuana licenses for cultivation, processing, distribution, and testing growing by 82% from 9,522 licenses on January 1, 2018 to 17,350 licenses as of December 10, 2018.

With the launch of California’s adult-use cannabis market and Oklahoma’s issuance of more than 2,000 licenses in just a few months, the number of marijuana licenses in those two states alone jumped from zero in January 2018 to more than 7,300 licenses in December.

Distributor licenses saw the most growth followed by cultivator licenses and delivery licenses:

Number of Marijuana Licenses in January 2018

In January of 2018, the majority of active marijuana licenses in the United States were held by cultivators, followed by dispensaries/retailers and manufacturers as follows:

Number of Marijuana Licenses in December 2018

Fast forward to December 2018, and cultivators still held the most marijuana licenses across the country followed by dispensaries/retailers and manufacturers:

With more states launching medical and recreational marijuana programs, news from Florida that Governor-elect Ron Desantis might change regulations to remove medical marijuana license caps, and rumblings that lawmakers in Washington, D.C. are becoming more open to descheduling cannabis, you can expect the growth in marijuana licenses to continue for the foreseeable future. Cannabiz Media will be tracking it all in the Cannabiz Media License Database.