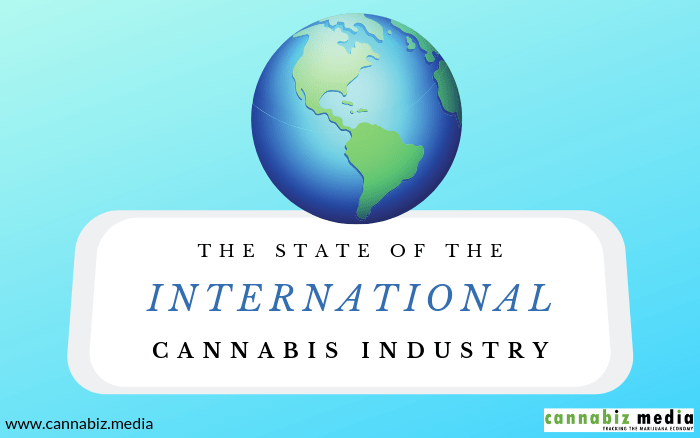 The State of the International Cannabis Industry

As of January 2019, approximately 50 countries around the world officially regulate some form of medical cannabis. Some industry experts predict the number will jump to 70 by 2021. Cannabiz Media is actively adding international cannabis license data into the Cannabiz Media License Database and will continue to do so as the market grows.

It’s important to note that laws vary significantly from one country to the next today. For example, while some counties only allow cannabis derivatives in very specific cases, others have legalized full recreational use.

Despite the radical differences in laws, the key takeaway is that the stigma attached to cannabis is lifting around the world. Importing and exporting is already happening and some countries are well-positioned to lead the way in the future.

The state of the international cannabis industry today includes the following countries that have legalized some type of cannabis use and/or sales:

Of course, when you think of countries to watch in the cannabis industry, countries like Canada with established and federally legal medical and adult use programs are the first to come up. But what about up and coming countries?

In Europe, Germany is considered one of the biggest international opportunities due to its cannabis regulations and the size of its medical cannabis market. Demand is expected to continue to grow well into the future, and since licenses are often obtained by foreigners who are able to establish residency in the country, it’s an attractive market for growth-oriented companies and investors.

Of course, all eyes are on the United States with a variety of cannabis bills in Congress. However, Mexico is another North American country to watch.

Mexican lawmakers plan to tackle cannabis legalization this summer after the Supreme Court determined that the government’s ban on cannabis consumption, personal cultivation, and possession was unconstitutional. The Supreme Court set an October deadline for the Senate to come up with a plan for legalization.

Brazil presents a unique story. While most citizens don’t support cannabis legalization, the country does approve permits for individuals to import medical cannabis under specific circumstances. The permits are granted by Brazil’s National Sanitary Surveillance Agency (ANVISA) and have to be renewed annually. The problem is that importing makes cannabis very expensive, so most patients don’t renew their permits and the black market continues to thrive.

In November 2018, the Brazilian Senate approved a bill that would legalize home growing of medical cannabis, but the country’s current government is trying to shift back to a drug policy that promotes abstinence. If things change and Brazil’s cannabis market has a chance to grow, this is definitely a country to watch. It looks like that might be a long way off though.

Africa and the Middle East

Israel has a long-established reputation as a cannabis research hub, and the country is trying to capitalize on that reputation. In addition, the government is loosening some cannabis laws. In recent months, a number of companies have started looking at Israel for targeted investments. At the same time, Israel approved medical cannabis exports and decriminalized adult use cannabis.

In Africa, Lesotho was the first country to regulate cannabis for medical use in 2008. It’s a small country that grows a lot of cannabis. Conditions are perfect for growing, and the government has taken steps to develop a strong regulatory framework that could attract investors who would view the country as perfectly located for exporting to African markets. Already, several cannabis companies from the United States, Canada, and the United Kingdom have invested in cannabis licenses in Lesotho.

Countries in Southeast Asia have been slow to legalize any form of Cannabis, but following Thailand and South Korea, the Philippines is considered by many to be the next most likely country in the region to regulate medical cannabis. A bill that was approved by the House of Representatives in January is set to go through another vote and then to the Senate (if it passes the next House vote) when the House resumes its session later this month. If approved by both the House and Senate, it will go to President Rodrigo Duterte who has stated he supports legislation that would legalize medical cannabis.

Another country to watch is China, which has already shown interest in Israel’s cannabis research. China controls one-third of the world’s hemp production, so it’s not surprising that the country is interested in cannabis opportunities. In January, a delegation of businessmen and academic research from China visited Israel and met with Israeli cannabis researchers and companies in the cannabis field with a focus on technology, agriculture, and pharmaceuticals.

What’s Next for International Cannabis Markets?

All signs point to growth for international cannabis markets, which means a variety of opportunities will open for savvy investors and businesses to secure footholds in different countries around the world.

Cannabiz Media will be tracking all of the international license activities in the Cannabiz Media License Database. Schedule a free demo and see what data is available to you.