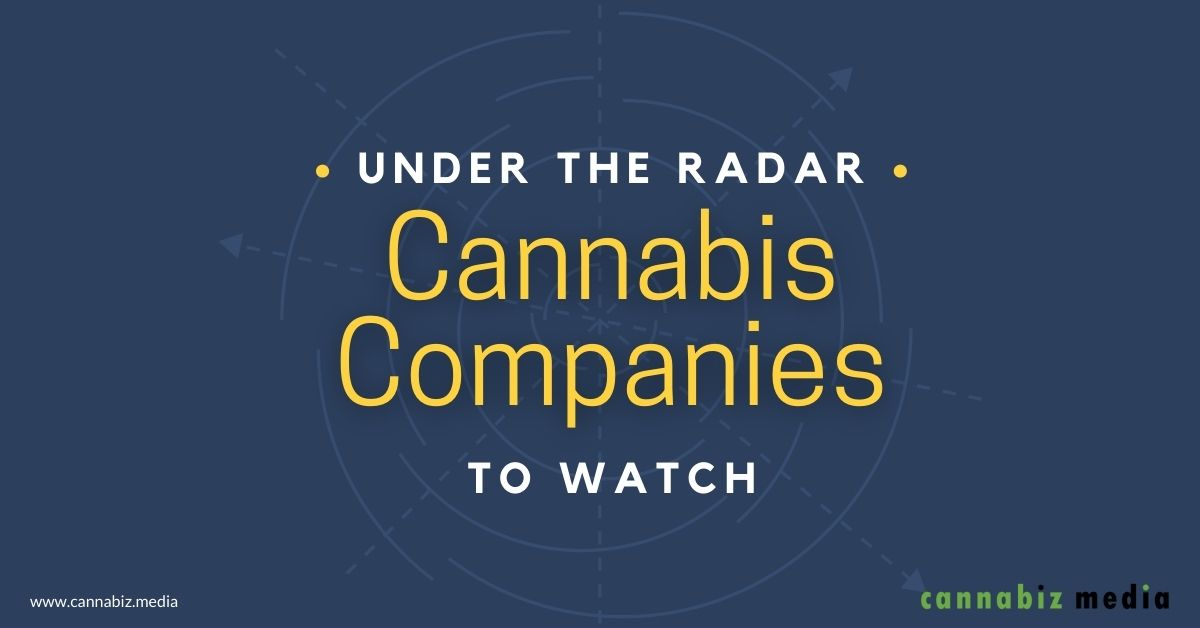 Under the Radar Cannabis Companies to Watch

When we were building Cannabiz Media’s Cannabiz Intelligence™ business intelligence base, we identified a number of cannabis companies that are operating under the radar today but could present big opportunities in the future. In other words, these are companies to watch!

Four of these under the radar cannabis companies are (in alphabetical order) Etain Health, Ethos Cannabis, Finn Fettle Dispensaries, and Terrabis. Let’s take a close look at each one.

Etain Health, both a woman-owned and a family-owned business, was one of the first companies to get a cannabis business license in New York’s vertically-integrated medical marijuana market. The company focuses on offering high quality, consistent cannabis products made from proprietary strains.

You can see the breakdown from Cannabiz Media’s Cannabiz Intelligence base in the image below.

With adult-use cannabis coming to New York, Etain Health is actively investing in scaling its operations across the state. As Chief Operating Officer Hillary Peckham explained to Cannabis Business Times in April 2021, “Scaling takes access to capital, and we are trying to figure out our next steps in how to accomplish that. We need to build out additional cultivation square footage and invest in more equipment for different product forms because in adult-use, there will be more allowable forms, like edibles, that we don’t currently have in the medical market.”

In 2020, the company, with its real estate development partner, began seeking access to capital to help with cash flow needed to build a $7 million, 60,000 sq. ft. expansion of greenhouse (42,000 sq. ft.) and manufacturing (18,000 sq. ft.) space to its Chestertown, NY medical cannabis growing and processing plant. When completed, the investment would add $1 million in manufacturing equipment and nearly double the number of Etain Health employees within two years of its completion.

Etain Health financed the project with a $5.1 million bank loan it obtained from the National Bank of Coxsackie during the summer of 2020. The remainder of the project was financed through $2 million in equity, and it is expected to finish by the end of 2021.

Ethos Cannabis, a private multistate operator run by the former CEO and founder of Pharmacan (one of the largest vertically-integrated cannabis companies in the United States), has been expanding rapidly and now has facilities in three states across the Northeast.

You can see the geographic breakdown in the graph from Cannabiz Media’s Cannabiz Intelligence base below.

The company began aggressively growing in 2020 by obtaining new licenses and acquiring existing licenses in key strategic states with a goal to expand its footprint in the East Coast, Midwest, and Mid-Atlantic states.

In early 2020, Ethos Cannabis acquired one operational dispensary in Allentown, Pennsylvania and four operational dispensaries in Maryland from 4Front Ventures Corp. This purchase not only allowed the company to enter the cannabis market in Maryland, but it also instantly gave Ethos Cannabis the maximum number or dispensary locations it could have under current Maryland laws. At the same time, the company was rapidly opening four dispensaries in Massachusetts within six months.

All of this growth requires capital, which Ethos Cannabis got by raising over $50 million in debt and equity to fund the Maryland dispensaries acquisition. The company has raised over $90 million of capital with most of it coming from Philadelphia-area investors.

As Ethos Cannabis Chief Financial Officer David Clapper explains, the company is “focusing on operational execution now – getting our dispensaries open, increasing our revenue, increasing our EBITDA, and then, looking at additional strategic acquisitions if available or even additional licensing.”

Fine Fettle Dispensary Holdings LLC has been expanding in Massachusetts and Connecticut in recent years and successfully won one of only six licenses to grow, manufacture, and sell low-THC cannabis in Georgia when they were initially awarded in July 2021.

You can see the breakdown by state and activity in the chart below from the Cannabiz Intelligence base.

In 2021, the company expanded its footprint in Massachusetts significantly by acquiring dispensaries from Patient Centric in Martha’s Vineyard and West Tisbury. At the same time Fine Fettle Dispensary Holdings has been actively pursuing approvals from local municipalities to shift its existing medical dispensaries in Connecticut to hybrid locations that can sell both medical and adult-use cannabis when the state awards adult-use licenses (assuming the company can win those licenses).

You can see the breakdown of Terrabis’ licenses (both active and pending) in the chart from Cannabiz Media’s Cannabiz Intelligence base below.

Terrabis opened its first dispensary in Missouri in May 2021 and expanded very quickly to open three additional dispensaries in the state with a fourth on the way. The company also plans to open a manufacturing plant in Kansas City, Missouri where it will begin processing products by the end of 2021.

Key Takeaways about Under the Radar Cannabis Companies

The cannabis industry is filled with growth opportunities, and these four companies are some of the ones to watch. Each company is pursuing a slightly different strategy to scale its operations but with a common goal – to grow and gain a competitive advantage in the markets where they operate.

All of this growth requires capital, which equates to opportunities for investments, mergers, acquisitions, and more.

You can keep track of cannabis license holders, identify key contacts, boost your sales, and more with the Cannabiz Media License Database. For comprehensive financial analysis data, M&A targeting, and valuations subscribe to Cannabiz Intelligence™ – the business intelligence base for the cannabis and hemp industries. Schedule a demo to see it in action.