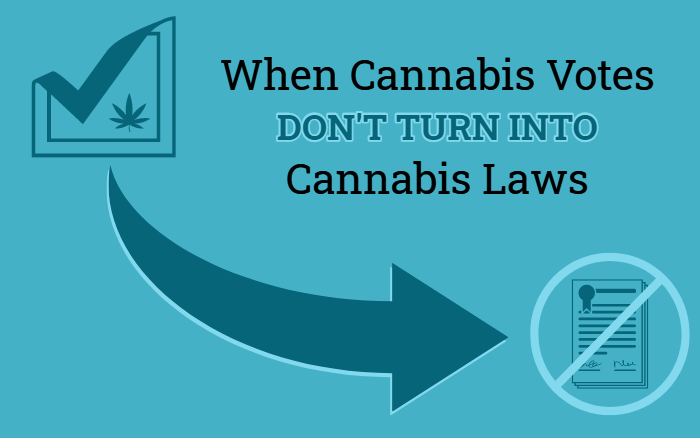 November 3, 2020 was an exciting day in the cannabis industry, but there is still work to be done. Legalizing medical or recreational cannabis by ballot initiative is just the first step. Next, states need to finalize the regulatory frameworks for their cannabis programs, and in the past, some states haven’t entirely listened to the voices of their constituents when crafting and implementing the laws.

We’ve repeatedly seen people vote for medical cannabis or adult-use cannabis, but what the people thought they were voting for changed significantly when government officials developed laws to put cannabis programs into action.

When this happens, “legal” medical or recreational cannabis programs roll out with onerous restrictions that limit access for the people who voted for legalization in the first place. The many restrictions can also cause an imbalance in cannabis supply and demand, which leads to increased prices for patients and consumers.

Reality vs. Expectations in Florida

Florida residents had to deal with this problem after the vast majority of voters cast their ballots in support of Amendment 2 in November 2016. Amendment 2 was a law that would expand the state’s medical marijuana availability significantly beyond the 1,800 residents who qualified for it at the time.

The problem was that Florida lawmakers seemed determined to blend Amendment 2 with existing cannabis laws rather than listening to voters and developing a new regulatory framework. Advocates for Amendment 2 fought against this blended approach citing two primary issues.

First, the proposed blended law would limit the number of approved cannabis growers (who were also the only approved distributors and sellers in a vertically integrated market scheme) to the existing seven.

Second, the law that residents voted in favor of would allow doctors to prescribe medical marijuana for debilitating medical conditions of the same kind or class as the nine specifically listed in the amendment if the doctor believes the use of marijuana outweighs the potential health risks. The blended rule proposed by lawmakers required that a medical board approves each of the conditions first. Clearly, these two approaches were not in alignment.

Fast forward to 2019 and the state’s vertically integrated structure was still causing problems in the Sunshine State. Such a structure has long been cited as a path to creating cannabis industry monopolies and oligopolies, but Florida rolled out its cannabis program with mandatory vertical integration across the supply chain.

In July 2019, a Florida court ruled that vertical integration is unconstitutional. The case went to the state’s Supreme Court where it still remains with the most recent oral arguments heard on October 7, 2020. The session ended with the high court providing no timeline for when a decision will be made.

Volatility is the Norm in the Cannabis Industry

Florida wasn’t the first state to run into delays and surprising changes when creating and implementing cannabis laws. Massachusetts residents voted in favor of legal cannabis during the November 2016 election, but on December 29, 2016, the Massachusetts House and Senate passed a bill that would delay the opening of marijuana shops in the state by up to six months.

The Massachusetts bill was passed during informal sessions in both legislative chambers without a public hearing or a debate. Making matters worse, only a small number of lawmakers were actually present when the bill passed because many of them were away for the holidays at the time. Ultimately, marijuana sales in Massachusetts didn’t begin until November 20, 2018.

In Colorado, a different kind of volatility has made it difficult for some marijuana retailers to stay in business. When a law passed in 2016 requiring dispensaries and growers to have all marijuana products tested, businesses in some municipalities faced significant challenges to comply. That’s because Colorado’s marijuana dispensaries must obtain state and local licenses to operate. Without both licenses, they cannot get their products tested. Unfortunately, some municipalities didn’t have local licensing systems in place in time to meet the new law’s July 1, 2016 deadline.

The Colorado example discussed above shows how even though residents voted a long time ago to legalize cannabis, the actual laws that are written can make the industry as a whole run quite differently than how voters expected it would when they cast their ballots.

However, the problem happens even before state governments are required to develop cannabis programs. On November 6, 2018, Wisconsin voters in 16 counties and two cities (accounting for nearly half of the state’s residents) were asked to weigh in on advisory referendums related to medical and adult-use marijuana, which appeared on their ballots. Wisconsin residents overwhelmingly approved those referendums by margins of two-to-one, three-to-one, and four-to-one. Unfortunately, the referendums were non-binding, so they didn’t change any laws by themselves.

Can State Governments Bring Votes and Laws Together?

Variations in laws are to be expected while cannabis is still illegal at the federal level, but state and local rules should always adhere to the voice of the people. In many cases, that hasn’t happened. A vote for medical cannabis or adult-use cannabis isn’t always turning out the way many voters envisioned it would.

Already, there are concerns about new cannabis markets in the states that legalized on November 3rd. In New Jersey, lawmakers are planning to introduce legislation to implement the recreational market quickly, but there are concerns that small businesses and minorities may not have enough opportunities to join the market with the 12 existing license holders expected to automatically qualify for adult-use licenses.