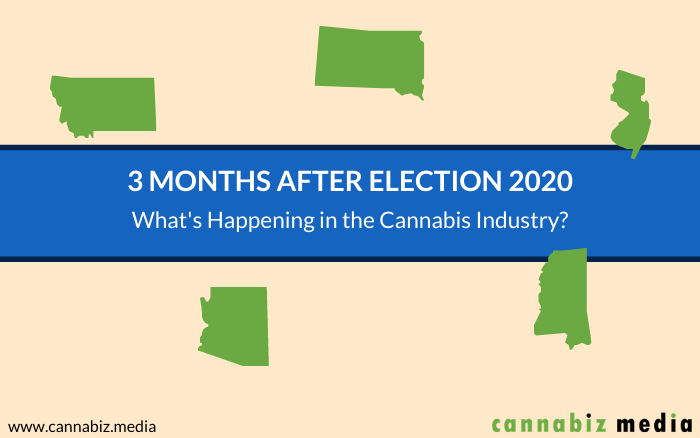 3 Months after Election 2020 – What’s Happening in the Cannabis Industry?

It’s already been three months since the 2020 General Election. US voters elected a new president, Congress, state legislatures, and governors — most of whom are already settling into their positions for the legislative year. Additionally, five states’ voters made cannabis history by legalizing cannabis to some degree, either establishing medical or adult use markets, or in one case, launching both at the same time.

In Arizona, Mississippi, Montana, New Jersey, and South Dakota, voters approved some form of legalization. Arizona, Montana, and New Jersey already have established medical cannabis programs. Montana’s provider-oriented program has a network of smaller operators with cultivation sites and a limited number of dispensaries, while Arizona and New Jersey both have significant multi-state operator (MSO) presences. Mississippi and South Dakota will be transitioning from prohibition to medical only and new medical and adult use markets, respectively.

This article looks at the current status of each state’s emerging regulatory framework including updates on timelines and expectations on coming launches as well as possible legal challenges standing in the way of program implementation.

Arizona’s medical cannabis industry has had time to prepare for adult use legalization, with a different measure failing to garner enough votes a few years ago. The medical industry has expanded in recent years in the Grand Canyon State, and new testing regulations went into effect shortly before the November election. Regulators and the industry were ready for a smooth transition, and on January 22, sales launched at a Harvest location in Scottsdale.

As an MSO-heavy market, Arizona’s 131 existing dispensaries received the first opportunity to apply for co-located retail licenses inside existing dispensary facilities. In addition to Harvest’s Scottsdale location, over 100 retailers have been approved to date, with regulators awarding approval with a rapid turnaround time.

Some of the state’s lower-population counties will be forced to wait until later this year to see new retailers receive licenses nearby: a permit process will award 26 licenses in counties that currently lack dispensaries this spring. The Arizona Department of Health Services will continue to act as the regulator for both programs moving forward.

Earlier this month, Montana’s legislature turned down a $1.35 million budget request to fund implementation. The state Department of Revenue’s efforts to jumpstart the rule-making and licensing process are currently on hold, with applications expected to be available this fall and sales launching in early 2022. Previously, multiple lawsuits have been filed to prevent implementation of the measure, but so far, none have succeeded.

For the first year, only existing medical license holders will be able to apply for adult use licenses — leaving major national companies outside the market for the most part. Some estimates suggest over $230 million in revenue could be brought in over the next five years.

Rules are forthcoming, and licensing is expected to begin in time for an August 15, 2021 program launch date. At the same time, the Mississippi Supreme Court announced on February 1, 2021 that it will hear a legal challenge to the amendment in April, which may delay the implementation of the program.

The New Jersey legislature has repeatedly stalled on Public Question 1’s enabling legislation. The amendment to legalize cannabis in the state permitted possession but was scant on details outlining market structure. Despite having continued growth in recent years, and a significant MSO presence, including Acreage, Columbia Care, Curaleaf, Green Thumb Industries, and Verano, the state legislature has been unable to reach an agreement to launch adult use operations.

According to Forbes, legalization was scheduled to launch on New Year’s Day — over a month ago — but January 1st came and went with no changes to existing prohibition. Medical patients continue to access cannabis through dispensaries, but personal possession limits failed to take effect.

This status quo will continue until legislators and the governor agree on a regulatory framework. This includes the future of cultivation, manufacturing, distribution, and retail license availability, social equity, local restrictions, and taxes, among other issues.

As of this week, a new compromise bill is working through the legislature. A group of legislators previously opposed the bill’s underage possession offense, claiming it would disproportionately affect Black and brown youth. These same lawmakers remain unhappy, but the bill passed out of committee.

South Dakota voters cleared the way for legal cannabis by two ways: a constitutional amendment and a statutory ballot initiative for adult use (and hemp) and medical use respectively.

Since the election, litigation calling the amendment a violation of the state constitution has become a roadblock to implementation. The state's governor remains opposed to the amendment, and a current lawsuit by the state highway patrol superintendent and a sheriff is in court to overturn the ballot measure. Nonetheless, Governor Kristi Noem recently requested $4 million to begin implementation, and cannabis revenues by 2024 could be close to $30 million.

According to MJ Biz Daily, the state’s Revenue and Health departments are cooperating to develop adult use and medical cannabis licensing. Details on the market structure are still limited, but with local authorities unable to outright ban medical businesses, there will likely be some communities with dual adult use and medical businesses, while other communities will have medical only, similar to other states, including California, Colorado, Massachusetts, and Nevada.

While lawsuits threaten to delay or derail legalization efforts in Montana, Mississippi, and South Dakota, MSOs and states dominated by them are likely to be the clear winners from the 2020 Election’s class of new cannabis markets.

Arizona has already passed the first major hurdle: launching sales; while New Jersey is stumbling toward a new start date. Litigation is likely to wrap up by late spring or early summer in the remaining states, and clarification on rules, public comment periods, and applications are likely to be available by the end of this year in many of these states.

Over the past decade, adult use rollouts have averaged over two years: California, Colorado, Massachusetts, and Oregon had extended periods with delays even prior to limited early sales. Maine’s legislature took nearly four years to launch a voter-approved market.

Given these timelines, Arizona and New Jersey will likely plow ahead to early sales and beat historical trends. An existing medical market will likely benefit Montana, while South Dakota and Mississippi’s lack of any market will pose opportunities and challenges.