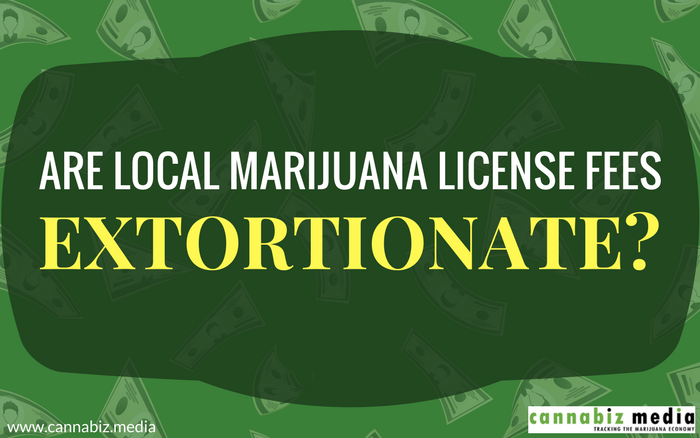 Local marijuana license fees can have a significant impact in a state’s marijuana industry. In some states where medical and/or recreational marijuana has been legalized, local municipalities are given a great deal of leeway in determining what marijuana businesses can and can’t do within their borders.

As a result, many municipalities charge a variety of fees and taxes to cannabis-related businesses. They might even prohibit cannabis sales entirely or create insurmountable rules and regulations that create a hostile environment for the cannabis industry.

For many local regulators, charging cannabis license holders steep fees and taxes is seen as a great way to generate revenue and create jobs. They’re already charging fees to license alcohol, so adding cannabis is a natural progression. And for those who dislike cannabis, it’s an easy way to make the industry more palatable.

However, the problem in the cannabis industry isn’t necessarily local fees but rather, extremely high fees that could be considered extortionate.

Excessive local fees first made national news in 2017 when Mass Medi Spa failed to make a $100,000 community revenue sharing payment to the town of Norwell, Massachusetts. That fee, which was imposed by the local municipality, was in addition to state-related license fees and made the cost to do business in the marijuana industry too high in Norwell.

In the case of Mass Medi Spa, city officials told The Patriot Ledger that the payment was part of an agreement that the town reached with Mass Medi Spa before its license was granted in February 2016. Town officials believed Mass Medi Spa decided not to build its dispensary in Norwell, and the reason might have been the legalization of recreational marijuana that Massachusetts residents voted for in November 2016 coupled with the fact that Norwell, Massachusetts residents had voted locally to ban recreational marijuana sales.

In fact, regulations had already been passed to prevent recreational sales in the town. In other words, Norwell created an environment where even medical marijuana sales are challenging while the next town over might be a whole lot easier and less expensive to do business.

Norwell isn’t the only town in Massachusetts that charges marijuana businesses excessive fees to operate within its borders. In 2016, a dispensary in Worcester, agreed to pay the town $450,000 over three years and $200,000 every year after that. At the same time, a dispensary in Springfield was negotiating with city officials on a deal that would pay 7% of the dispensary’s revenue plus an annual $50,000 donation to the city’s police department.

The problem in Massachusetts is something referred to as “host community agreements” (such as the agreement between the town of Norwell and Mass Medi Spa) which allow municipalities to collect fees up to 3% of a marijuana business’ gross sales for up to five years as long as the fee is “reasonably related” to the business’ impact on the town. However, many of these agreements include extra payment requirements that businesses are expected to make through donations. In addition, some agreements extend the five-year timeline for collecting these fees.

WBUR out of Boston, Massachusetts investigated 40 host community agreements and found that many included some type of donation from $2,500 per year to $250,000 per year. The municipalities argue that the fees are necessary to offset costs related to managing traffic, public safety, drug prevention programming, and so on, but in July of this year, the authors of the state’s cannabis law sent a letter to the Cannabis Control Commission asking it to review and address municipalities that exceed the 3% cap. In August, the Commission voted against reviewing the agreements as part of the licensing process.

Massachusetts isn’t the only state that allows municipalities to tack on fees and taxes that make doing business in the marijuana industry difficult. In California, local marijuana licensing fees can vary significantly from one city to the next.

The city of Commerce, California charges a non-refundable application fee of $13,025, and for anyone applying for a microbusiness license including the three required activities, the fee is a minimum of $39,075.

Local regulators are charging excessive fees in the Midwest too. In Ravenna, Ohio, a March 2018 ordinance established an annual licensing fee of $25,000 for cannabis businesses, and if sales for those businesses exceed $1.25 million, the city will also take a percentage of the profits.

The village of Seven Mile, Ohio will charge marijuana businesses a $500 fee for a license application, $15,000 for the actual license, and a $250 yearly renewal fee, which is on top of the state’s $5,000 application fee and $70,000 biennial certificate of operation fee.

Local Fees and Regulations Can Make or Break a Cannabis Business

In September 2018, Portland, Oregon’s regulators came to the realization that charging high fees to cannabis license holders was hurting the cannabis industry.

The Portland City Council decreased fees for all license types bringing the fee for retailer licenses down from $4,975 to $3,500 and application fees for retail couriers and micro-tier producers and processors down from $1,000 to $200.

Hopefully, more local regulators across the country will do the same in the near future.

Who Pays the Price?

Ultimately, it’s consumers who pay the price for extortionate fees, taxes, and regulations. First, patients and consumers have less access to the medical and/or recreational marijuana they want and need when businesses have too many financial and regulatory burdens to overcome in order to operate within a municipality.

Second, the many fees, taxes, and regulations marijuana businesses must pay increase the cost of doing business, which trickles down to consumers in the form of higher prices. Third, high fees reduce competition, which ultimately increases prices for consumers. Unfortunately, it’s a vicious circle with no signs of stopping in some states.

As Vince Sliwoski of CannaLawBlog says, “Cities should not license cannabis businesses. They should support them.”

What do you think? Should local municipalities be allowed to collect such high fees from cannabis businesses? Leave a comment below and share your thoughts.