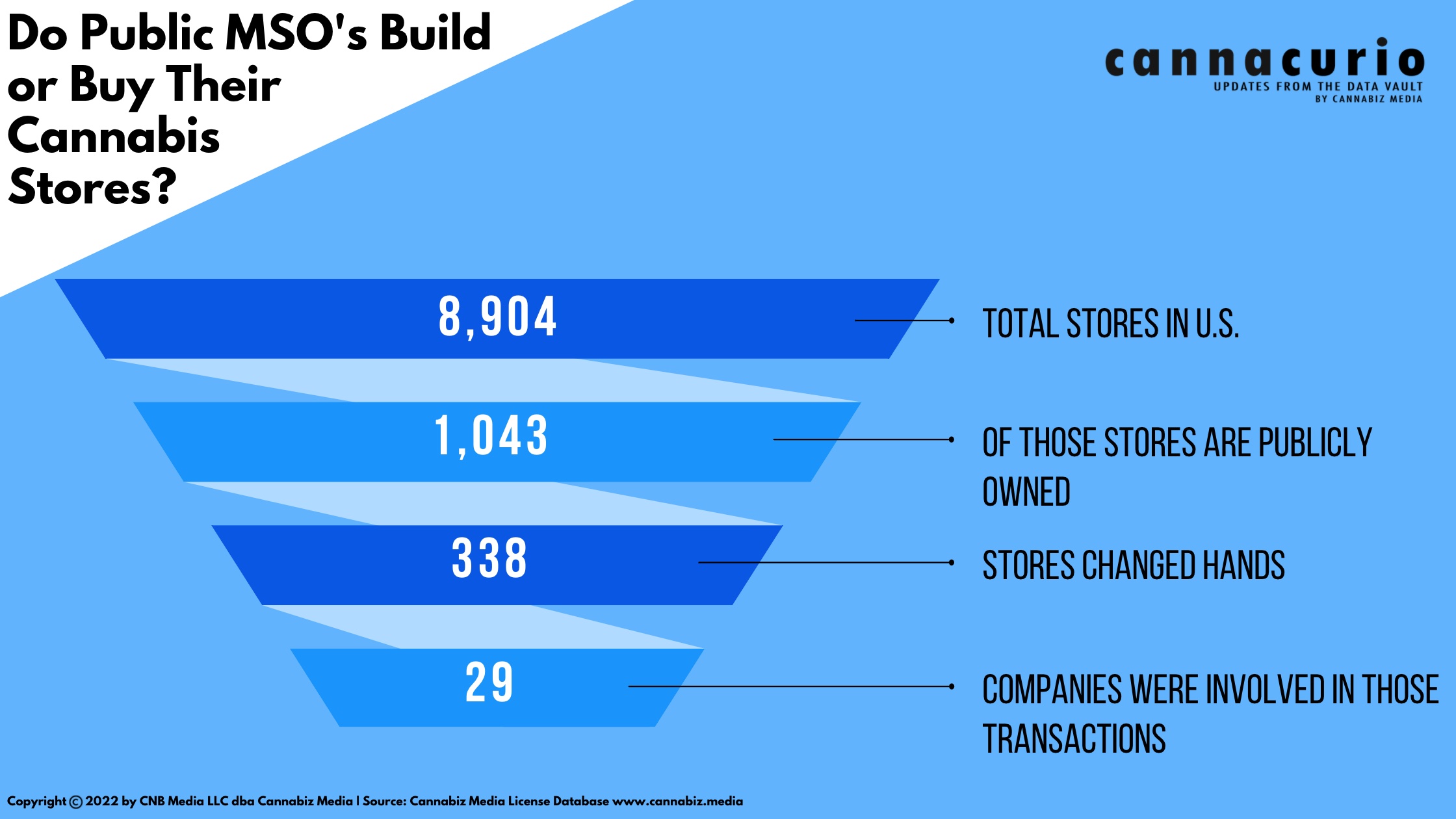 Cannacurio #57: Do Public MSOs Build or Buy Their Cannabis Stores?

Cannabiz Media has been tracking cannabis and hemp licenses globally since 2015. Over those seven years, we have aggregated a mass of data on licenses, companies, and transactions that result in change of license ownership.

After compiling 500 transactions in our Cannabiz Intelligence™ platform, we wanted to take a closer look at how key publicly traded MSOs were adding to their store footprints. Our goal was to determine which stores were “built” versus those that were “bought”.

According to the Cannabiz Media License Database, there are currently 8,909 stores/dispensaries in the US. Of those licenses, 1,048 (11.8%) are owned by public companies, and we found 338 stores that changed hands. A total of 29 public companies were involved in these transactions.

The graph below shows the number of stores that have changed hands. We only included closed deals.

In trying to assess the footprint impact, we compiled the number of stores bought against the number built or awarded. The Leaderboard below shows public MSOs that bought at least 10 stores.

Based on our analysis, Trulieve has bought the most stores (54), and that accounts for 32% of its footprint. AYR Wellness purchased 42, accounting for 62% of its stores. Curaleaf, a company with a very large footprint, has only acquired 15 stores. $1.2B was spent by these firms to acquire these licenses.

More stores were acquired in limited license states rather than unlimited license states. Limited license environments are more predictable thanks to the oligopolistic protections afforded by the regulations.  Early entrants are well positioned when the inevitable adult use market opens, and they have advantages including customers, marketing, branding, real estate and established relationships with regulators.

The M&A Hotspots Table shows the states that public MSO’s invested in.

We do not see this trend ending anytime soon. The latest blockbuster deal of Cresco and Columbia Care will run into license cap issues in some states, and this will require divestiture. In future posts, we plan to look at the license cap issue and delve into which states have had their licenses MSO’d – like Connecticut. We welcome your questions as well, so reach out directly to ekeating @cannabiz.media.

Analysis like this is as much art as science, so here is some of the logic we applied:

Shea Sanford is Product Manager for Cannabiz Media’s Cannabiz Intelligence product.  He’s responsible for sleuthing out corporate transactions and keeping track of MSOs, SSOs, REITs, SPACs and any other acronyms we can find.