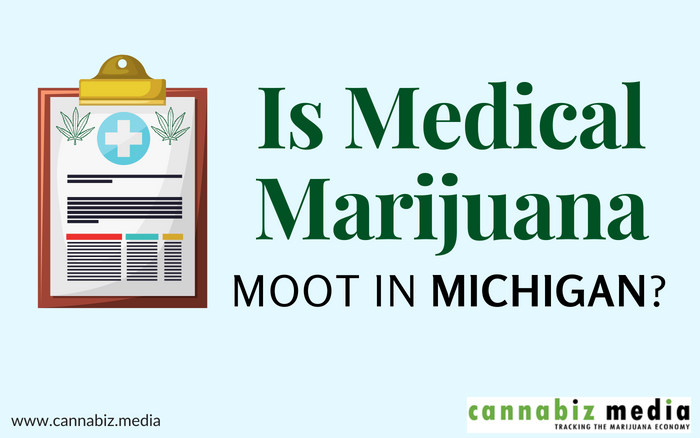 Is Medical Marijuana Moot in Michigan?

Nearly a decade ago, Michigan adopted its first incarnation of a medical marijuana program—without any sort of licensing framework. To try and remedy this, state legislators decided to amend the law in 2016 and began rolling out a legitimate state and local licensing structure in early 2018. However, 2018 is coming to a close, and state officials have licensed only a handful of businesses. Furthermore, a vote for recreational marijuana is set to appear on voters’ ballots this month. Perhaps the state is biding its time for a big recreational push in the coming months, and maybe some business owners should too.

Medical Marijuana in Michigan: 2008 to Today

Medical marijuana officially came to Michigan in 2008 when Michigan state legislators quickly drafted and initiated the Michigan Medical Marihuana Act (“MMMA”) after a successful ballot proposal called for its creation. Under the MMMA, licensed patients in Michigan could grow up to 12 plants for their own use, while licensed marijuana caregivers could grow 12 plants for up to six individuals for a total of 72 plants.

The MMMA also led to the creation of a patient and caregiver registry, and it provided some protections to criminal prosecution. However, the Act was completely silent as to the regulation of dispensaries or specific cultivation or processing businesses. Basically, the idea was that it was now okay to grow and smoke marijuana, but how and where patients would obtain it was unspecified.

This led some creative entrepreneurs to open dispensaries that operated as non-profits. Licensed caregivers opened storefronts where they distributed marijuana to patients for donations in return. However, this loophole was closed after a series of court rulings from 2011 to 2016, prompting law enforcement to begin shutting down dispensaries.

Towards the end of 2016, Michigan lawmakers realized that the MMMA needed an overhaul. The overhaul came in the form of the Medical Marihuana Facilities Licensing Act (“MMFLA”). The MMFLA aims to establish a licensing and regulation scheme for medical marijuana cultivators, manufacturers, transporters, testing labs, and dispensaries.

Entrepreneurs seeking to engage in any of the aforementioned activities must first comply with any local ordinances, then submit an application packet to the state in order to receive a license. Many still operating gray-area dispensaries were encouraged to begin seeking local approvals while the state prepared its approval process.

But at this same time, recreational programs in Oregon, Colorado, and Washington were quite successful and were moving along in a fairly smooth manner. Controlled recreational markets are enticing to consumers, entrepreneurs, and lawmakers alike. With Michigan often cited as the next largest marijuana market after California, there has always been heavy interest in legalization of a recreational program in the state.

This interest gave rise to a petition for a statewide ballot measure for the legalization of recreational marijuana in Michigan. In 2017, the Coalition to Regulate Marijuana Like Alcohol gathered enough signatures for possible entry onto a 2018 ballot. Though the Michigan legislature had the first jab at the petition, in the end, Republican lawmakers in the state could not muster enough support to keep the measure off the ballot.

Now, if the measure is passed by voters this month, the state senate will need a ¾ super-majority vote to amend it. With seemingly overwhelming support in Michigan, recreational proponents think a victory is imminent. However, as the state moves closer to November 6th and a possible recreational win, the pace of its medical program has not quite picked up.

State officials cite their complex license approval process as the main reason for the hold-up, but with a vote right around the corner, that almost sounds like an excuse to some business owners. Some local governments are also stalling ordinance drafting and approval processes for medical facilities as they consider the possibility of having to re-draft rules againshould the recreational measure pass.

For most of the latter half of 2018, there was widespread concern that currently operating businesses would be forced to cease operations and destroy all of their medical marijuana inventory by October 31. However, as of October 30, a judge issued a temporary restraining order on LARA to prevent them from carrying out this plan. Another favorable extension for current business owners is good news for patients as well, though it may be short-lived.

What Happens Next in Michigan?

Now, some businesses are thinking about just waiting to see what happens this month, and for those who have yet to go through the lengthy process and expensive fees, this may seem like the smarter choice. After all, it’s no secret that recreational markets have surpassed medical markets in states that regulate both. For example, in Oregon, the medical program has seen a slump, as medical cultivators began migrating to the recreational program.

It’s possible Michigan officials foresee a similar shift, hence the hesitation to move forward at full steam under the MMMA and MMFLA. While this can be a wise move for the state and some potential licensees, it also hurts medical businesses and patients who have been ready and waiting for the smoke to clear. Furthermore, such actions can send a poor message as to the importance and legitimacy of medical marijuana programs.

Either way, it’s clear that Michigan lawmakers and state officials need to step up efforts if they hope to have successful programs—medical or recreational.