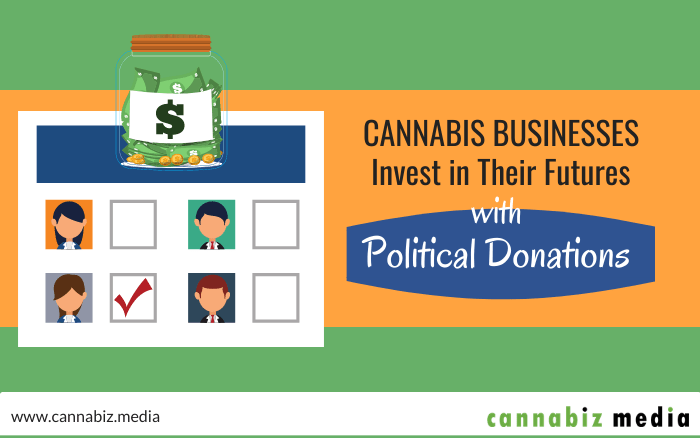 Cannabis Businesses Invest in Their Futures with Political Donations

Cannabis companies have been making political donations for years, and in 2020, those donations have continued to grow. In fact, some companies are investing aggressively to shape the future of the cannabis industry either by donating directly to campaigns and politicians or through political action committees (PACs) that support cannabis-friendly candidates and legislation.

So far in 2020, the Center for Responsive Politics reports that the leading cannabis companies, cannabis-related companies, and cannabis trade associations making donations to federal candidates, parties, and outside groups are (in order of 2020 donation amounts to date):

Compare that list to the list of large cannabis company donors in 2019, which included Curaleaf, Parallel Brands (formerly Surterra Wellness), Tweed Inc. (part of Canopy Growth Corporation), Canndescent, and Trulieve. Even ancillary cannabis companies like Dama Financial, WeedMaps, and Acreage Holdings donate large sums of money in 2019 according to data from the Center for Responsive Politics.

There are a number of legalization (adult-use and/or medical use) and decriminalization measures on state ballots in 2020, and cannabis companies, ancillary companies, and professional associations have been actively donating directly to related campaigns and initiatives at the state level.

Political Donations from Cannabis Interests Are Not New

One of the biggest political donation stories happened in California when cannabis businesses donated aggressively to former Lieutenant Governor Gavin Newsom’s campaign to become the state’s governor in the 2018 election. According to the Los Angeles Times, he secured hundreds of thousands of dollars in donations from cannabis cultivators, processors, and retailers.

By May 2018, Newsom had raised nearly $500,000 from cannabis companies, but he wasn’t the only politician in California to receive money from cannabis interests. At the time, the state’s Treasurer, John Chiang, and Attorney General, Xavier Becerra, also secured donations from the cannabis industry.

And of course, these donation numbers don’t even include the many donations from PACs that businesses and individuals working in the cannabis industry donate to. Many of these funds go directly to specific candidate’s fundraising efforts. For example, the Coastal Pacific Political Action Committee held a fundraiser in June 2017, and six days later, the PAC donated $50,000 to Newsom’s campaign.

Another noteworthy political donation happened in Florida over the course of multiple years. The Miami Herald reported that Surterra donated $1.1 million to Florida political candidates and committees between the summer of 2016 and March 2018. Trulieve donated $564,000 during the same period, and Curaleaf donated $469,000.

In Illinois, the doors for cannabis companies to make political donations opened in March 2017 when a federal judge ruled an Illinois provision that did not allow marijuana companies to make campaign contributions in the state was unconstitutional.

According to the Chicago Tribune, the provision prevented contributions to political committees that were established for the purpose of promoting candidates for public office. Since that decision was made, cannabis companies like PharmaCann and Cresco Labs have donated significant amounts to the state’s political candidates and committees.

Business and individual donations to marijuana-friendly political candidates have also become standard in Nevada and Colorado. During the 2016 elections, dozens of marijuana cultivators, processors, and dispensaries donated $75,000 to Nevada legislators according to the Nevada Independent.

Looking back further in history, Florida Senator Rob Bradley received his first donation from a cannabis company in 2015 when Costa Farms donated $10,000 to his political committee.

Similarly, cannabis businesses have actively contributed to Colorado political campaigns for years, and many of those businesses have been holding political fundraisers to support their preferred candidates. PBS reported back in 2014 that Colorado’s congressional delegation had received $20,000 during the first nine months of 2014 from marijuana businesses. Also in 2014, a fundraiser to support political candidates that was held by Tripp Keber of Denver, Colorado’s Dixie Elixirs & Edibles generated $40,000 in donations.

What’s Next for Political Campaign Donations from Cannabis Businesses?

As the cannabis industry continues to grow and more states legalize medical and/or recreational cannabis, laws will continue to evolve. Cannabis businesses and ancillary businesses should absolutely be concerned about which politicians are making those laws.

With that said, it’s safe to assume that political donations from the cannabis industry will get larger and more frequent in the coming years. Let’s put the donations from cannabis companies to political campaigns into perspective. During the first half of 2019, the cannabis industry gave more than $200,000 to members of Congress, which was up from $248,504 donated throughout all of 2018. Compare that to the $42 million that pharmaceutical companies donated to political campaigns across the United States in 2018.

With those numbers in mind, it’s guaranteed that political donations from cannabis and cannabis-related companies will continue to grow. Savvy businesses are paying attention and getting involved in an attempt to influence the regulations that could make or break their companies’ futures.