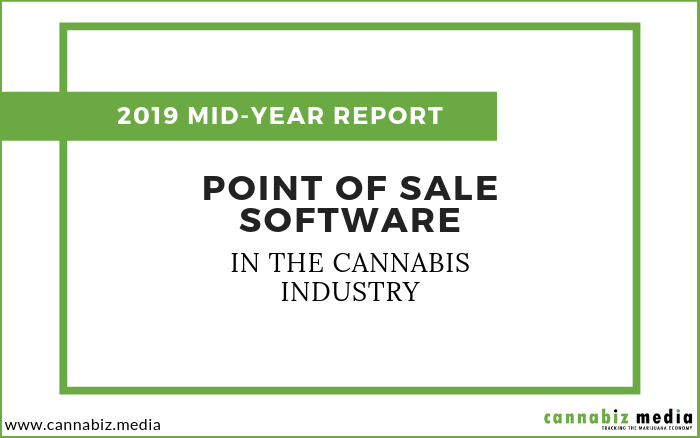 For more recent data, follow the link to learn about Cannabiz Media’s Point of Sale Software in the Cannabis Industry: 2020 Report.

For the mid-year 2019 report, the Cannabiz Media team used a convenience sampling method to gather data from 2,178 of the 5,148 active cannabis dispensaries and retailers nationwide. New for the mid-year 2019 report is how the team counted software vendors. If a store had both a dispensary and retail license, the point of sale vendor was only counted once. This impacts values in states like Colorado and California where multiple licenses have been granted.

The number of point of sale software vendors in the cannabis industry increased by 58% between the end of 2018 and the middle of 2019. There are now 68 unique point of sale vendors being used by the license holders that provided information for this report.

Shake up of the Top 5 Vendors

At the end of 2018, five vendors accounted for 80% of the cannabis market, but they’ve lost market share in the past six months. In addition, Adilas dropped to sixth place and Indica Online jumped to fifth:

Changes in Medical-Only and Adult-Use States

All Eyes on Oklahoma

Oklahoma has issued more licenses per capita than any other state. Cannabiz Media found 28 point of sale providers in the state, but five of them account for 65% of the market. Indica Online leads with a 20% market share followed by BioTrack with a 13% market share.

There has been a drastic decline in the number of active cannabis licenses in California since the Bureau of Cannabis Control stopped issuing temporary permits at the end of 2018 and required businesses to apply for provisional or annual licenses. Despite the expiration extinction event, California is still filled with “one state wonder” point of sale software vendors.

The number of vendors operating in California increased by 55% from 18 in 2018 to 28 in mid-2019. Eleven of these vendors are currently only serving the California market. The top five vendors in the state make up 58% of the market, led by Treez with a 15% market share and Indica Online with a 12% market share.

If you have any questions about the white paper, point of sale software data, or cannabis license holder data, contact the Cannabiz Media Team.

And don’t forget! All of the data included in this research report (and much more) is available in the Cannabiz Media License Database. Schedule a free demo to see it in action.