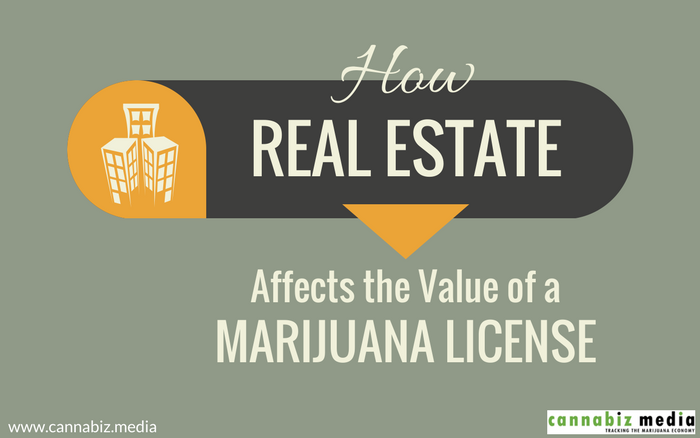 How Real Estate Affects the Value of a Marijuana License

The term “cannabis effect” or “cannabis premium” refers to the inflated real estate costs that cannabis license holders are required to pay across the United States. The problem is the cost of real estate has a direct negative effect on a cannabis business, the value of the business’ marijuana license, the prices consumers have to pay for cannabis products, and the cannabis industry overall.

Ultimately, exorbitant property costs (whether those costs are paid through rent or purchasing commercial property) create barriers to entry in the cannabis industry, which translate into less competition since only big players can afford them and to higher prices for consumers as a result of the trickle-down effect.

Before we go any further, it’s important to understand the situation cannabis license holders face. In many states, marijuana cultivators, processors, and dispensaries can’t get marijuana licenses unless they’ve secured property for their operations before they submit their license applications. That means the businesses have to pay rent while they wait to see if their applications for licenses are approved.

Some marijuana businesses end up spending hundreds of thousands or even millions of dollars on high rent payments before they even have a marijuana license in hand. What happens if they aren’t approved for licenses? And what happens if the property’s landlord makes things difficult by increasing the rent, adding fees or stipulations, or trying to cancel the rental agreement entirely?

For example, in Redding, California, cannabis businesses are required to operate in areas zoned as industrial or heavy commercial. Property options are somewhat limited. In addition, retail cannabis license applicants are required to secure property prior to submitting their applications in California.

Therefore, some past applicants placed offers on multiple locations hoping one would be finalized if their city licenses were approved. Once approved, they’d cancel the other locations despite the fact that some property owners in the city’s “green zone” required large non-refundable deposits. One property owner required that a cannabis license applicant pay a $35,000 non-refundable deposit, which the applicant forfeited when the license wasn’t granted.

The risk is very real. It’s also not new.

BTHHM Berkeley LLC, owner of The Apothecarium dispensary in Berkeley, California, learned that lesson back in 2017 when it was forced to sue its landlord who refused to allow the business to move into the location it had been paying rent on for 18 months while waiting for its marijuana license application to be approved. According to the lawsuit, after BTHHM got its marijuana license, the landlord doubled the rent, nearly quadrupled the security deposit, and added on new property taxes and fees to bring the building up to code (approximately $700,000).

Clearly, real estate can create challenges for marijuana businesses, but it’s a key factor in determining the value of a marijuana-related business and its marijuana license. Across the country, the price of real estate for marijuana-related operations keeps going up. According to the New York Times, property prices and lease rates have doubled in recent years, and marijuana businesses are paying well-above market value in states like Massachusetts, California, Maine, and more.

In Denver, Colorado, cannabis businesses paid two to three times above the market rate for rent between 2014 and 2016, and according to research published in 2017 by real estate services firm CBRE, cannabis cultivators are being charged $12 to $18 per square foot of warehouse space in Portland, Oregon, where the same space typically rents for just $5 per square foot to non-cannabis businesses.

Fast forward to 2019 and license holders are still forced to pay a cannabis premium on property. In San Francisco, California, land has skyrocketed in value, and cannabis license holders are paying six-times the value it once sold for. In Colorado, industrial space is going for 30% above the national average.

According to the Ventura County Star, property valued at $300,000 the last time it changed hands sold for $5.1 million in Port Hueneme, California in November 2018. In June 2017, before Port Hueneme approved recreational marijuana sales, a cannabis license holder paid $1.6 million for a specific property, but just over a year later when recreational sales were approved, the property next door sold for $4 million.

City officials in Port Hueneme report that the cost of commercial or industrial property in Port Hueneme has increased by 25% in the past 12 to 18 months, which is significantly higher than the 3% to 4% traditionally characterized as a healthy market.

In addition, buying commercial or industrial property isn’t feasible for many cannabis license holders. Since marijuana is still illegal at the federal level, banks are unlikely to give cannabis businesses loans to purchase property, and if a business can secure a loan, the interest rates are typically very high. With property rates skyrocketing in areas where marijuana has become legal, particularly for adult use, only businesses with deep pockets can buy property today.

Ray Schiavone, CEO of Tahoe Hydro shares, “I’ve seen a ton of different real estate deals in the last few years. For instance, in Salinas, California, my friend bought a 10-acre greenhouse property for $1.2 million, and then had offers for $7-$10 million a year and a half later when the county decided to legalize recreational marijuana. In Sacramento, my business partner, Mark, and I were going to buy a 45,000 foot concrete tilt up for $1.6 million that was worth about $4 million a year later.“

You’re almost guaranteed 100% return when buying something in an area prior to marijuana being legal there. It just depends on the market. All of the commercial real estate in Sacramento went from around $50 a foot to over $100 when Sacramento started to issue permits.”

The value of a marijuana license is greatly affected by the success of the license holder, and success usually means controlling costs. As Tim McGraw, Founder and CEO of Canna-Hub, a California-based real estate development and property management company for the cannabis industry, says, “Overhead matters. You need to operate where you’re going to make the most money. If you’re giving up too large of a chunk of your revenue, you’re starting out behind from the beginning.”

Tim’s company works to take the hurdles out of the way for marijuana-related businesses by doing much of the work that license applicants must conduct before and after they obtain a license in California. Canna-Hub also develops cannabis business parks where all marijuana businesses except dispensaries and outdoor growers are allowed to operate.

“We did the legwork and negotiated excellent local permitting fees,” explains Tim. “The lower a business’ local permitting cost is, the more valuable that business is to banks and investors.”

To combat skyrocketing rent, some marijuana businesses prefer to own the real estate where their businesses operate if they have the money to do so. Sally Vander Veer, co-founder and CFO of Denver, Colorado-based Medicine Man – a marijuana cultivator and retailer, told Inc. that owning real estate is, “The only thing we can control in this industry.” She says it is, “essential to long-term success.” Josh Ginsbert, co-founder and CEO of Native Roots, says his company purchases property to maintain control and to avoid investing a large capital outlay to build-out a facility that his company doesn’t own.

The debate over which option is better for marijuana license holders and marijuana-related businesses – owning or renting property – is still open, but the good news is there are choices that can help license holders retain or increase the value of their cannabis licenses.

The Importance of Real Estate in the Marijuana Industry

As Tim McGraw says, overhead matters, and that includes the price marijuana businesses have to pay for facilities. Local rules related to zoning, permits, and so on vary greatly from town to town, so navigating the process to obtain real estate, ensuring it will be acceptable for marijuana-related operations for the long-term, and avoiding paying high rent or fees based on revenues are critical to ensuring a marijuana license holder’s property investments add value to the marijuana license rather than reduce it.

Currently, many investors are trying to get into the marijuana industry, and property has become a key focus for them. Already, there are approximately 10 real estate investment trusts (REITs) and private funds developed specifically for the cannabis industry.

Until laws change, banking options increase, and there is enough property to meet demand, cannabis license holders will likely have to continue paying high rents.

What do you think about the excessive rents charged to cannabis license holders? Leave a comment below and share your thoughts.

Cannacurio #43: Where Will the Next Cannabis Licenses Be Issued?