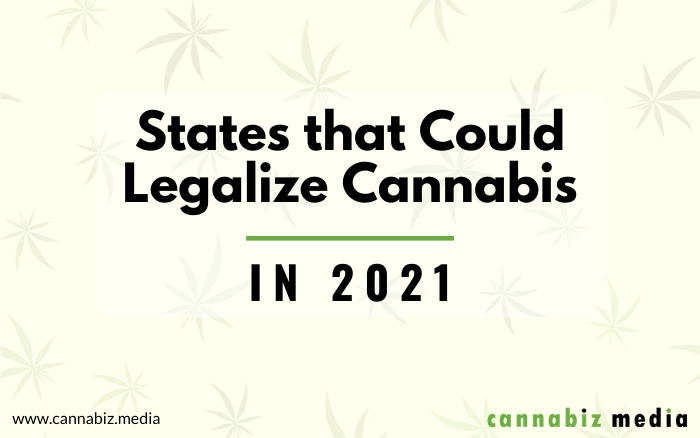 States that Could Legalize Cannabis in 2021

We’ve seen some significant developments in cannabis legalization in the United States during the first six weeks of 2021. The five states that legalized recreational and/or medical marijuana during the 2020 election have already started on their program implementation processes with Arizona aggressively approving more than 100 adult-use licenses.

Aside from Arizona, Mississippi, Montana, New Jersey, and South Dakota launching medical and/or adult-use sales through new programs in the coming year (assuming all goes smoothly with their timelines), there are other states that could push legalization through via the legislative process during 2021. Let’s take a look at some states that have been getting buzz for this very reason.

States that Could Legalize Recreational Cannabis in 2021

There are 11 states that pundits have been talking about in conversations about legalization in 2021, and some of those states are more likely to move forward than others.

With New Jersey residents voting to approve adult-use cannabis in the November 2020 election, other states in the Northeast are feeling the pressure to legalize too. Otherwise, residents will drive to New Jersey to purchase recreational cannabis, and states like Connecticut will lose the tax revenue that comes with those sales.

Currently, Connecticut has a very restrictive medical cannabis program, but with Massachusetts to its north, New Jersey to the south, New York to the west (which pundits expect to legalize adult-use cannabis soon), and an ocean to the east, the state will be surrounded by legalized adult-use states in the near future.

The state legislature has publicly committed to voting on legalization in 2021. It’s soon going to become very difficult for them to justify not legalizing.

Another part of the blue wave of east coast states that have already legalized adult-use cannabis or are expected to do so in the near future, Delaware is another victim of geography in terms of its inability to delay legalization for much longer. After all, it’s a quick drive across the Delaware Memorial Bridge to get to New Jersey.

So far, Delaware’s governor has been against legalization, but you can’t slow progress or the will of the people. It seems like Delaware is another state where legalization is inevitable sooner rather than later.

Shifting a bit further south, Maryland is bordered by the District of Columbia, where recreational cannabis is already legal, and Virginia, where lawmakers passed two adult-use legalization bills on February 5, 2021.

Unlike Delaware’s governor, Gov. Larry Hogan of Maryland has not publicly declared a specific stance on legalization, but the state does seem further behind in the legalization process via legislation than other states in this article.

Voters in Minnesota’s western neighbor, South Dakota, legalized both adult-use and medical cannabis at the same time in the 2020 election, so the marijuana landscape in the Midwest is beginning to change. However, the state’s Republican-controlled Senate is still causing a roadblock that may be hard to overcome in 2021 as it relates to recreational cannabis legalization.

New Mexico’s governor wants cannabis legalization, and pundits believe 2021 is the year legislators will be able to move a legalization bill through the state’s Senate. With Arizona to New Mexico’s west legalizing adult-use cannabis in the 2020 election and awarding 102 licenses within the first six weeks of 2021, New Mexico legislators may feel more motivated to speed things along.

New York is a state to watch for adult-use legalization in 2021 with the governor and recently top Republicans in the state getting onboard. With Democrats in the Senate now having a supermajority in the state, it’s expected that legalization will happen this year.

That’s good news because when New Jersey’s adult-use market opens, the state would undoubtedly lose a lot of sales and tax revenue to the Garden State.

A big budget deficit and adult-use cannabis legal in New Jersey (and probably other states within a short driving distance very soon), it’s only a matter of time until Pennsylvania legalizes too. The governor has been pushing for it, but with Republicans still in control in the state, it may not be enough to get a bill passed in 2021.

Rhode Island is surrounded by Connecticut, where adult-use cannabis could be approved in 2021, and Massachusetts, where it’s already legal. This is another state where it makes more sense to legalize recreational use than it does to keep it illegal.

The state’s Senate finally seems to be figuring that out and legalization may just make it into conversations in 2021, especially as it relates to recovering from the negative economic impact of COVID-19.

There are already bills filed and waiting for discussion in Texas related to legalizing recreational cannabis. It seems unlikely that anything would pass in 2021, but stranger things have happened in the cannabis industry.

Virginia is a state to watch in 2021. The governor included money in his budget released in December 2020 for legalization, and on February 5, 2021, the House of Delegates and Senate passed two different legalization bills.

Wisconsin is a state where voters seem ready to approve adult-use legalization based on voting patterns in previous state and local elections. We’ll have to wait and see whether or not the legislature will pass something based on what residents are telling them with their votes.

States that Could Legalize Medical Cannabis in 2021

There are the three states that pundits have been talking about the most when it comes to legalizing medical cannabis this year.

This could be a long shot, but Alabama’s House and Senate leaders have publicly stated that they’d consider medical cannabis measures. That’s about as far as they’ve gotten so far, but it’s getting harder and harder for states to not legalize medical cannabis. We’ll see if they can hold out for another year or if 2021 is the year medical cannabis is finally approved in Alabama.

Polls show the majority of Kentucky residents support legalizing medical cannabis, and the state’s governor has publicly stated his support of it. Legislation didn’t make it out of the state’s Senate in 2020, so only time will tell if there is success in 2021.

After five years of “vetting,” “testimony,” and “input,” Senator Tom Davis of South Carolina publicly stated that there is a good chance medical cannabis could pass in 2021. However, the state’s governor has said he will oppose legalization. Will 2021 be the year? It seems doubtful, but there is still a glimmer of hope.

Key Takeaways about States that Could Legalize Cannabis in 2021

Some states are certainly farther along the path to adult-use cannabis or medical cannabis legalization in 2021, so it will be interesting to watch which states’ legislators can actually pass meaningful reforms this year.

All eyes are definitely on the Northeast where a domino effect of legalization has been predicted since New Jersey residents voted yes to recreational cannabis in November 2020. It’s really just a matter of which state legalizes first at this point. Which state do you think it will be?

Want to keep track of new and changing cannabis licenses across the U.S., Canada, and international markets? You can do it with the Cannabiz Media License Database. Schedule a demo to see how you can use it for research, lead generation, sales, business development, marketing, and more.

What Consumers Want from CBD Brands