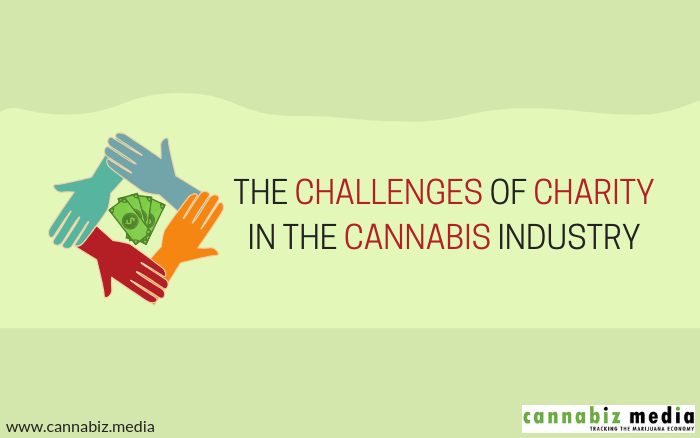 The Challenges of Charity in the Cannabis Industry

Social good initiatives and giving back to the communities where companies operate is expected of businesses today, but what happens when charitable organizations aren’t willing to accept your business’ donations? It’s a problem that legal cannabis license holders have faced for years.

Despite the fact that marijuana is now legal for medical and/or recreational use in 32 states and the District of Columbia, many non-profit organizations either aren’t allowed to accept donations from marijuana businesses or they simply don’t want to accept those donations. This is often the case even in the 11 states (plus Washington, D.C.) where marijuana is legal for recreational use.

Cannabis businesses that want to give back to their communities or to specific charitable organizations are often faced with push back from the very organizations that are so often desperately trying to raise money.

Ironically, many states require that cannabis license holders have comprehensive plans for charitable donations and volunteer work. For example, in Massachusetts, license applicants are required to outline detailed plans to provide a positive community impact within their applications. Each plan is reviewed as part of the application and licensing process.

But that’s not all. Cannabis businesses that want to give back (and may be required to do so) often hit barriers before they even approach a non-profit to discuss possible donations.

Let’s take a look at the obstacles that cannabis companies have to navigate and the risks that charities have to evaluate before they accept a donation from a business operating in the cannabis industry.

Currently, cannabis businesses have to overcome some big obstacles to find non-profit organizations to work with:

Cannabis businesses are not allowed to claim many typical business expenses on their tax returns, which includes charitable donations. That means there is no tax benefit to making donations for marijuana companies.

Cannabis is still classified as a Schedule 1 illegal substance at the federal level, which causes many non-profit organizations to refuse donations from marijuana companies. To get around this obstacle, some cannabis companies have had to use a “middle man” to make donations.

For example, Miller Rail Farms had to donate to a separate non-profit organization, which then donated the money to an elementary school in Calaveras County, California. The money was used to re-open pre-school and music programs, but had the cannabis company not donated the money to the third-party first, the school would not have accepted it.

Similarly, the team at California’s Bloom Farms volunteers to help at local service projects and food banks. In addition, Bloom Farms donates a meal to a local food bank for every product purchased at its dispensary.

Many non-profit organizations view donations from cannabis companies as a risk they’re not willing to take. Here are three reasons why:

The 501(c)3 tax filing status isn’t easy to get, and once a charitable organization gets that status, the non-profit doesn’t want to lose it. Accepting funds from a business that deals in a federally illegal substance could put a non-profit organization’s 501(c)3 status at risk.

Therefore, some organizations won’t consider cannabis-related donations at all. Others will discuss the potential risks with their attorneys and boards before making a decision.

Many non-profit organizations don’t want to be associated with cannabis companies. There is still a stigma in society related to marijuana despite the fact that an April 2019 Hill-HarrisX poll found that 84% of registered U.S. voters support marijuana legalization.

As long as marijuana is classified as a Schedule 1 drug, this perception is unlikely to change for some charitable organizations.

For charitable organizations that rely on federal funding, accepting donations from companies involved in an industry that sells a federally illegal product is not an option. If such donations are accepted, the non-profit could lose its federal funding and might have to close its doors.

The same is true of charitable organizations that rely on donations from individuals and large companies who might not approve of marijuana. Until the stigma surrounding marijuana is lifted and the public’s perception of it is more positive, this risk will continue to prevent non-profits in need from accepting money from cannabis companies.

What’s Next for Cannabis Companies and Charities?

As the cannabis industry grows and markets mature, marijuana companies are generating profits that could be directed to a wide variety of non-profit organizations.

Philanthropy is good for cannabis companies. If tax rules change, monetary and product donations could also help cannabis business’ tax situations — as they do for businesses in other industries.

In addition, philanthropy provides a brand reputation boost and can help raise brand awareness. For example, the coveted millennial audience has shown that it not only seeks out companies that focus on giving back but it is also loyal to brands that prioritize profit-with-purpose.

This type of corporate philanthropy is also good for charities because it can give them significant boosts from monetary or resource (volunteers and products) donations.

What’s standing in the way right now are laws — specifically, the law that puts marijuana on the Schedule 1 controlled substance list and tax rules that don’t help cannabis companies and can even hurt cannabis companies in certain states.

Bottom-line, there is money to give and charities that need it. The next step is finding a legal way to bring them together so everyone benefits.