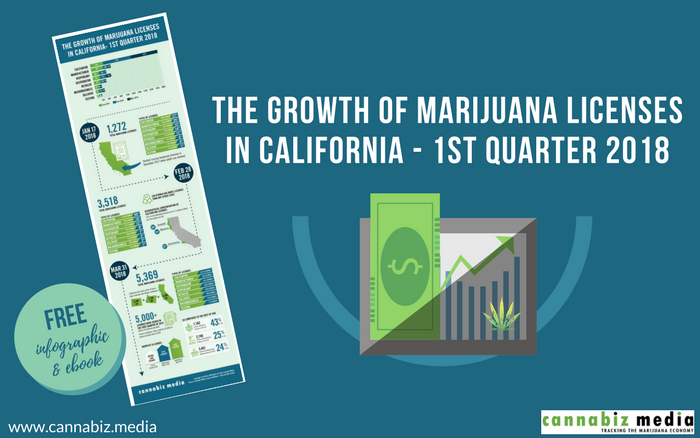 As expected, the launch of California’s adult-use marijuana program has brought significantly increased demand in marijuana products among consumers, and to meet that demand, regulators are working to approve temporary licenses across the supply chain. The infographic at the end of this article shows the growth of marijuana licenses in California during the first quarter of 2018 based on data from the Cannabiz Media License Database.

See all of the data in the infographic and more in Cannabiz Media’s FREE ebook, Marijuana Licenses in California.
Download it now!

California has been issuing an average of 65 licenses per day in 2018, and if this pace continues, there could be more than 20,000 marijuana licenses in the state by the end of the year.

California has quickly established its dominant position in the U.S. cannabis industry and shows no signs of slowing down in the near future. Already, 43% of active cultivation licenses in the country are in California as are 25% of manufacturing licenses and 24% of retail/dispensing/delivery licenses.

Hot beds of activity are happening in several California counties. For example, more than one in every two cultivation licenses (55%) are located in just three of the state’s 58 counties: Santa Barbara (22%), Humboldt (20%), and Mendocino (14%).

You can see all of the data included in the infographic and more in Cannabiz Media’s FREE ebook, Marijuana Licenses in California.

Cannabiz Media will be updating the Growth of Marijuana Licenses in California infographic on an ongoing basis, so you always know what’s happening. Look for updates here on the Cannabiz Media blog, and if you haven’t already subscribed to the Cannabiz Media newsletter, subscribe now so you don’t miss the new versions when they’re released.