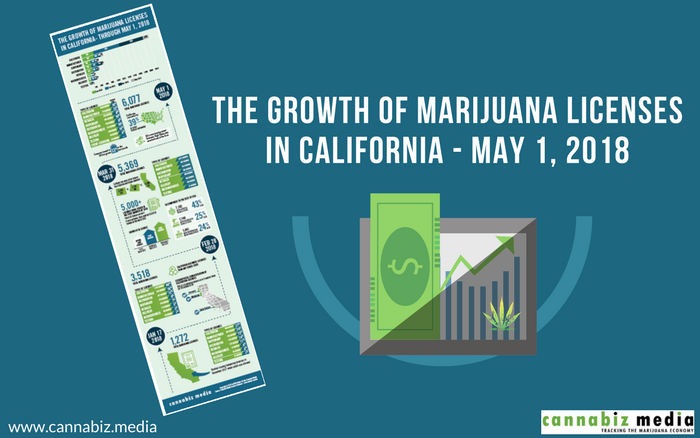 The Growth of Marijuana Licenses in California – January to May 2018: Infographic

Marijuana License Growth between January and May 2018

The number of temporary marijuana licenses that have been granted in California this year has grown by 378% from 1,272 licenses on January 17th to 6,077 licenses on May 1st. When you break down the growth rate from January 17 to May 1 by type of license, it’s clear that cultivation licenses have increased the most during the first four months of 2018:

In total, the number of marijuana licenses in California grew from 5,369 on March 31, 2018 to 6,077 on May 1, 2018, which equates to708 new licenses and a 15% overall growth rate in April 2018. That means California issued an average of about 24 licenses per day in April. The breakdown in growth by license type during April is as follows:

The breakdown of marijuana licenses in California still weighs heavily to cultivation licenses with 46% of all licenses going to cultivators, 28% to manufacturers, and 23% to retailers, dispensaries, and delivery businesses.

California Marijuana Licenses Compared to the Rest of the United States

As of May 1, 2018, California accounted for 39% of active marijuana licenses nationwide. The breakdown below shows just how much California dominates the country’s marijuana industry:

In other words, of the 15,521 marijuana licenses that have been granted across the United States, 6,077 of them are in California. The infographic below provides a visualization of this data and more from the Cannabiz Media Licenses Database.

The Future of Marijuana Licenses in California