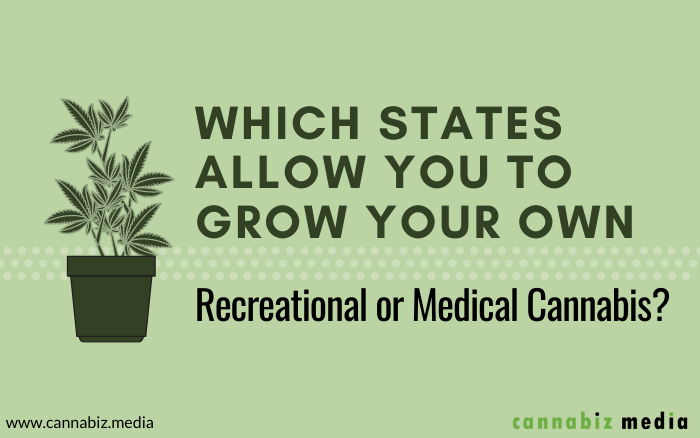 Which States Allow You to Grow Your Own Recreational or Medical Cannabis?

With a variety of legalization initiatives on multiple state ballots in November, it’s safe to assume the market will continue to grow, and in time, more states may allow some type of at-home cultivation for individuals. Until that time comes, let’s take a look at what each state allows in terms of home grown marijuana.

States that have approved home growing of recreational or medical cannabis include:

It’s interesting to note that the only state that allows legal recreational cannabis but does not allow home growing is Illinois.

Among states that have approved medical cannabis but not adult-use cannabis (with and without operational programs), the following do not allow home growing for medical patients:

No Medical, No Recreational, No Home Growing Allowed

Finally, states where cannabis is not legal in any form and thus, neither is home growing, include:

At the time of this article’s writing, home growing rules across the United States focus on the number and maturity of cannabis plants in order to regulate how much cannabis individuals can cultivate at their residences. Following is a brief overview of home growing rules for all 17 states plus the District of Columbia that allow it.

Adults age 21 and over may grow up to six cannabis plants for recreational or adult use, but they can only have up to three mature (flowering) plants at one time. When multiple adults age 21 and older live in a residence, the maximum number of plants allowed at that residence is 12 and no more than six of them can be mature.

Patients (and caregivers) who live more than 25 miles from a licensed dispensary may grow up to 12 cannabis plants.

In California, adults age 21 and older may grow up to six plants for personal use, and no more than six plants are allowed in a residence at one time. Medical cannabis patients have no growing maximums. Instead, they’re allowed to grow the amount they need to treat their medical conditions within a 100 square foot area. However, local jurisdictions can set their own caps.

Adults age 21 and over may grow up to six cannabis plants for recreational or medicinal use, but no more than three of those plants can be mature at any one time. Medical marijuana patients may request to grow more. Furthermore, caregivers with more than one patient (they can have up to five) are allowed to grow up to 36 plants.

Medical marijuana patients in Hawaii may grow up to 10 cannabis plants at one time for their own use, but they’re required to register as a cultivator with the state before growing.

Medical marijuana patients and caregivers in Illinois may grow up to 5 cannabis plants at one time for their own use. Recreational growing is not allowed. Growing five plants or fewer by non-registered medical patients is considered a violation and comes with a $200 fine.

In Maine, adults who are age 21 or older can grow up to six mature cannabis plants for recreational or medicinal use. A single residence can have a maximum of six mature plants and 12 immature plants.

Adults in Massachusetts who are age 21 or older can grow up to six cannabis plants for medical or recreational use. There is a cap of 12 plants per residence regardless of how many adults live there.

Individuals who are age 21 or over in Michigan can grow up to 12 plants at their residences. Caregivers who are registered with the state can care for up to five patients and grow a maximum of 60 plants (12 per patient).

Medical cannabis patients in Missouri who pay the required licensing fee may grow up to six cannabis plants at home.

Adult residents of Montana may grow up to four mature cannabis plants or 12 seedlings at their residence at one time for medicinal use. If two approved medical marijuana patients live at the same residence, they may grow a total of eight mature plants and eight seedlings. However, patients must report the locations of their home grows to the Montana Department of Public Health.

Adults who live 25 miles or more from a licensed Nevada dispensary may grow up to six plants per person indoors or 12 per household for recreational use if the property owner allows it. Medical marijuana patients may only grow cannabis at home if the closest dispensary is more than 25 miles from their home, the patient can’t travel to a dispensary, the strain or amount needed to treat the patient isn’t available at a dispensary in their county, or the patient was already growing at home before July 1, 2013.

Medical marijuana patients and caregivers in New Mexico may grow up to 16 cannabis plants, and four of those plants may be mature.

Medical cannabis patients in Oklahoma may grow up to six mature cannabis plants and six seedlings at their residences.

Adults age 21 and older may grow up to four cannabis plants for personal use. Caregivers may grow up to eight plants but only six of those plants can be mature at any given time.

Both medical cannabis patients and caregivers in Rhode Island are allowed to grow a maximum of 12 plants and seedlings indoors at their residences.

In Vermont, residents may grow a maximum of nine cannabis plants at any one time, but no more than two plants can be mature.

Only medical marijuana patients are allowed to grow cannabis at their residences in Washington. The maximum number of plants an individual patient can grow is six plants, but the number can increase to up to 15 plants if the patient’s doctor recommends it.

Adults living in the District of Columbia who are 21 years of age or older may grow up to six cannabis plants at a time for recreational use. A maximum of three of those plants can be mature and three can be seedlings. If multiple adults live at a residence, no more than 12 plants are allowed. Personal growing of medical cannabis is not allowed in Washington, D.C.

Fast forward to November 2020 – closing in on three years later – and the numbers haven’t changed significantly. Today, you can grow cannabis in 18 states (including Washington, D.C.) for recreational and/or medical use (up from 16 in 2017), but still you can only grow it in eight states if you’re not a medical cannabis patient.

With new cannabis laws pending and going into effect in the coming months and years, could more states start allowing some form of home growing for patients or adult-use consumers? Leave a comment and share your thoughts.