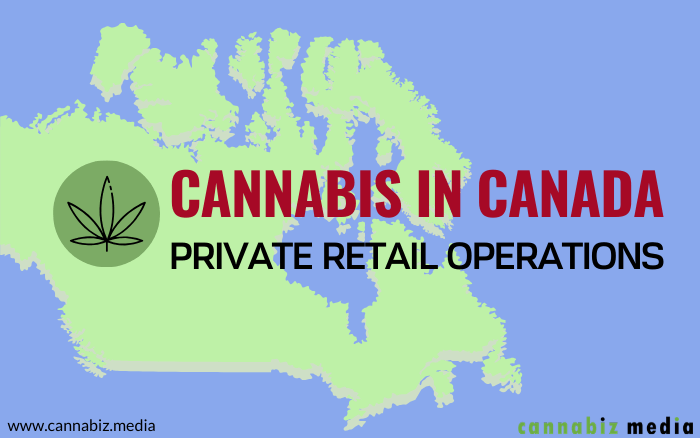 Since last October’s Cannabis Act launch in Canada, provinces nationwide have been rolling out retail schemes. Over the past few weeks, we reviewed the federal government’s involvement in licensing cultivation and manufacturing facilities, as well as some provinces’ government-run retail stores, a situation unique to Canada. In this week’s third and final installment, we will look at the more popular retail model Canada’s provinces have adopted: private retail licenses.

Not all private retail licensing schemes are created equal -- and not every province on this list started out as a private market last fall. The largest province by population, Ontario, planned on approaching legalization by creating a parallel to alcohol. The proposed Ontario Cannabis Store was to be for cannabis what the Liquor Control Board of Ontario is for alcohol.

After a legislative election and a change in governments, a plan to establish 150 public shops was scrapped. Ontario would’ve had the largest public system compared to Quebec and the Atlantic provinces mentioned in my previous blog.

Elsewhere, the Yukon Territory’s government run retailer has shut down as part of a planned evolution toward private licensing, with eight licenses either issued or forthcoming.

The Canadian Prairies are the heartland for private cannabis stores, where Alberta, Manitoba, and Saskatchewan all follow this model. On the eve of legalization, Alberta Gaming, Liquor and Cannabis announced interim cannabis licenses had been awarded to a first round of only 17 locations. A year later, there are now over 300--a nationwide record, where the two Canadian cities with the highest number of retailers are located: Calgary and Edmonton.

On day one, Nova Cannabis and Fire & Flower were the companies with the largest footprint, and they are among the province’s retail leaders to this day. Now, Alberta’s consumption is up by 25%, and analysts expect 500 retailers to be licensed by 2021.

The Liquor, Gaming and Cannabis Authority of Manitoba kicked off adult-use cannabis last year by selecting four companies, through a competitive bid process, as the prairie province’s first retailers. Each company was permitted up to ten retail locations, although no company has ever reached that cap.

Like many provinces, LGCA regulators blamed initial losses on product shortages; which affected every province’s distribution and retail systems, and have been resolved. Looking to the future, after the province’s second phase rollout, bringing cannabis retail stores to rural areas, the government anticipates opening up the market completely to any applicant, but no timeline has been established.

In Saskatchewan, the initial announcement of over 50 permit winners never fully panned out -- only 37 stores have opened and many selected permittees still have not opened their stores, and some have even withdrawn.

New permits have been awarded in some communities, but critics have been calling for the Saskatchewan Liquor and Gaming Authority to scrap the 51-permit limit. The government finally relented. According to the Regina Leader-Post, minimum population thresholds and other barriers will be dropped moving into 2020.

British Columbia’s long-standing cannabis culture has created challenges as the province adapts to a new industry. Going into legalization last year, numerous medical dispensaries were still operating with gray-market product coming from outside Health Canada’s federally licensed system of cultivators. The province eventually forced these dispensaries to close before obtaining a provincial license, which ultimately ended up in court.

Despite a slow initial rollout, as in other provinces, BC’s government has now fully or conditionally licensed nearly 160 stores, with almost 400 more in the queue under a stage of local or provincial review leading to expanded retail access in a region that is home to many licensed producers, and produces much of the country’s cannabis supply.

Newfoundland and Labrador is isolated as its region’s only private cannabis market, located near Quebec, Nova Scotia, PEI, and New Brunswick -- all of which have public retail systems. This province is the best opportunity for national retailers looking to expand their footprint into Eastern Canada.

With six locations, Tweed comes out on top among national retailers. Also in the province is a series of C-Store retailers, which are part of grocery giant Loblaw’s. Sales are expected to rise in the coming months with the launch of edible products, but sales through September 2019 generated over $36 million (CAD).

While British Columbia and Alberta’s approach to licensing qualified stores on a merit-based system has led to successes in Western Canada, Ontario has opted for a more conservative approach. After privatizing its system and scrapping public retailers, the province opted for a lottery to select the first 25 retail shops with many in Toronto and the surrounding area.

While allotments existed to give every area of the province an opportunity, launching with only 25 shops has led to limited availability. Stores were expected to open by April 2019, nearly six months after legalization started, leaving customers stuck ordering products online in the meantime.

Now, 50 more licenses have been announced through a second lottery phase -- 42 to private firms and eight to First Nations reserves. It’s important to note: Ontario permits are awarded to lottery winners, who are individuals. These winners are able to partner with larger national retail firms by entering into a franchise arrangement, but permits are not transferable. National chains, including Tweed and Canna Cabana, have been making small inroads in Ontario but have been kneecapped by lottery rules.

In Northern Canada, two low-population territories, the Yukon and Northwest Territories, have some of the lowest residents per license numbers nationwide with both under 9,000 residents per retail store. Northwest Territories seven locations are all inside liquor stores, which is unusual across Canada. Yukon is preparing to add three more stores to its recently opened five, and most of these stores are owned by small independent operators.

Retailers in all of these states, as with public-run retailers elsewhere, all stand to gain from the long-anticipated launch of edibles in the coming months. Large national chains continue to expand, and independent operators may sell their stores or shut down as the market matures. In general, Canada’s private retail model looks to be the biggest success arising out of legalization, so far.