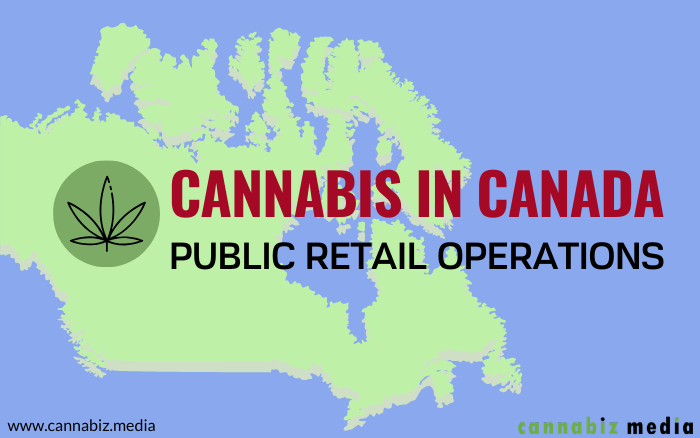 Since last October’s Cannabis Act launch in Canada, provinces nationwide have been rolling out new regulatory regimes covering distribution, home cultivation, public consumption, and retail stores. Hundreds of retail stores have popped up across Canada, from the Labrador Sea to the rainforests of British Columbia.

Not all provincial retail models are the same, however, with some provinces opening their doors fairly wide to private applicants, and others opting to sell cannabis themselves through public retail companies. This article, Part 2 in my Cannabis in Canada series, explores the provinces that opted for public sales, a system unique to Canada.

Some interpretations of the US Controlled Substances Act would suggest this type of model is not even possible in the US at this time. Recently, a Utah proposal to involve the state and county health departments in cannabis distribution and sales was reversed by the legislature.

Not all of these provincial systems have been profitable, and some provinces have explored the possibility of selling the stores to private operators, or closing them down and opening up licensing processes.

Atlantic Canada is home to the majority of the country’s public cannabis retail systems. Three of the four Atlantic provinces, New Brunswick, Nova Scotia, and Prince Edward Island (PEI), have all chosen to adopt this model, while Newfoundland and Labrador has opted to license private retail shops (more on them in Part 3 of the Cannabis in Canada series).

The three crown cannabis corporations are similar, though. Each company is affiliated with their respective province’s liquor regulator-retailer, and each company also acts as the sole distributor for the province. For any licensed producer across Canada, it is vital to secure distribution deals with these three agencies to ensure product ends up in these provinces -- it’s the only way to access these markets.

For each of these provinces, early sales were disappointing. Last fall, the first days and weeks of legal sales were an exciting time for first-time buyers exiting the black market. Many consumers were attracted to retailers after seeing extensive news coverage of legalization.

To complicate matters, the nationwide rollout was slower than expected with distribution challenges and product shortages. In the time since, licensed producers have added cultivation space nationwide to increase production, and distributors are receiving more product as a result.

Most of Nova Scotia’s cannabis outlets are unique among stores nationwide -- almost all of them are inside previously existing NSLC liquor outlets but in an enclosed space. Over the winter, the province pointed to high implementation costs as a reason for early losses, despite surpassing $17 million (CAD) in sales during the first few months.

Despite staggering early losses, Prince Edward Island’s standalone PEI Cannabis stores opened with three out of four anticipated locations. Sales have turned around and the province is now considered a national leader in cannabis sales.

In New Brunswick, Cannabis NB lost over $11 million (CAD) during the 24-week abbreviated sales year ending December 31, 2018. Losses continued into the spring, and according to CBC, the poor sales placed New Brunswick in third place among its Atlantic neighbors.

Troubles have continued into this year, and this spring, the provincial premier announced the government is considering privatizing its cannabis operations, noting, “It’s not something we’re going to run at a loss.” A final decision is expected soon, but with 20 existing stores in New Brunswick, this could become a competitive opportunity for major national retail players and local companies trying to get into the game.

This wouldn’t be unprecedented in Canada. Last week, Yukon’s sole government-run Cannabis Yukon store closed its doors in Whitehorse. This closure was anticipated as part of the government’s plan to roll out cannabis operations over the first year, and there now have been five private licenses granted throughout the territory.

In Ontario, a change in government led the original public retailer model to be scrapped, with the Ford administration slow-walking a retail rollout through two lottery processes, which have been criticized. More on Ontario’s private licensing scheme will come in Part 3 of the Cannabis in Canada series.

With edibles becoming legal within the past week, all of the provinces are looking forward to launching edibles sales in the coming months, with Nova Scotia’s NSLC anticipating sales around Christmas.

The Société québécoise du cannabis, Quebec’s crown cannabis retailer, operates over 20 stores currently and expects to nearly double the number of locations throughout the province, especially around Montreal, by mid-2020.

Quebec struggled during its retail rollout, mainly due to the nationwide product shortage. Unlike other provinces, the SQDC decided to limit store hours, shuttering locations for many days throughout the week and limiting product availability.

Since then, the Montreal Gazette reported stores reverting back to a full week’s schedule. With over $119 million (CAD) in sales through June 2019, Quebec is among the top three provinces for sales and the highest grossing province with a crown-operated retail system, behind Alberta and Ontario.

In northern Canada, Nunavut is likely the territory with the slowest moving rollout nationwide with no brick and mortar facilities in place and only a plan for future private licensing with the Nunavut Liquor and Cannabis Commission acting as the regulator. In the meantime, the territory, with a population of under 40,000, allows residents to purchase cannabis products online, directly from licensed producers Tweed and Vertical Cannabis.

What are your thoughts on the system these provinces have chosen to operate? Is it doomed to failure? Share your thoughts below. Next week I will delve more into Alberta, Ontario, and numerous other provinces with privately licensed cannabis retail stores.