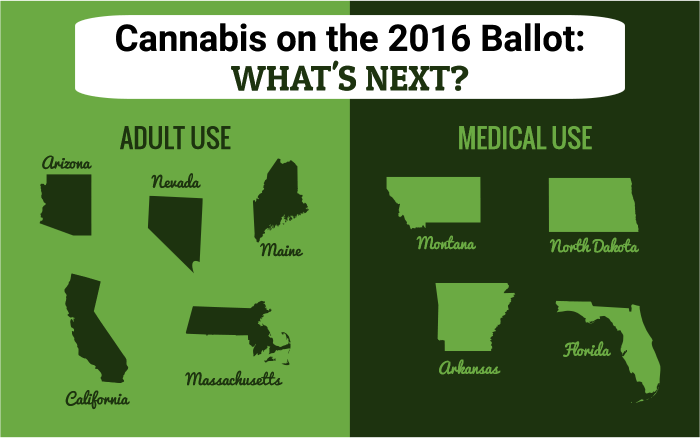 2016 is shaping up to be the biggest year yet for cannabis legalization, with voters in nine states seeing ballot measures as they vote next week. Voters in five states with existing medical marijuana programs—Arizona, California, Maine, Massachusetts, and Nevada—have the choice to approve the adult (recreational) use of marijuana, with regulated markets to supply it. Four other states’ voters will see questions to expand or reinstate existing programs, or create new ones altogether.

Ballot measures in five states will give voters the opportunity to vote on legalizing recreational cannabis cultivation and sale, also permitting personal possession and cultivation. Regulatory regimes will be established to license and tax cannabis.

Legalization isn’t immediate, however. Upon ballot measure passage, rulemaking periods will be initiated to determine regulations for a variety of concerns, including, but not limited to site security, product packaging, advertising, marketing, seed-to-sale product tracking, and others. These periods will generally wrap up in late 2017, and initial cultivator, processor, and retail licenses should be issued, with sales beginning by early 2018.

In all of the states with adult use ballot measures, regulations would provide for adult use of cannabis with limitations similar to alcohol, is for individuals age 21 and up, and personal cultivation would be legal, with possession limits and plant counts varying across the states—up to 2.5 ounces and 12 plants. Public consumption would not be permitted in some states, while such regulations have not yet been drafted in others.

Across these proposed ballot measures, cannabis taxation rates vary but are all 15% or lower, with revenues going to a variety of areas, including education and public health. Municipalities in all five states will be able to craft local bans in each state, limiting licenses or specific cannabusiness activities.

‍Arizona Proposition 205 would expand the state’s cannabis economy—while over 90 licensed medical dispensaries currently exist, the number of retail licenses available would be capped—up to a number equal to ten percent of the state’s liquor store licenses (approximately 180). A new bureau established by the measure, the Department of Marijuana Licenses and Control, would issue licenses.

‍California Proposition 64 is perhaps the most watched cannabis ballot measure of the year. As the first state to create a medical marijuana program in the mid 1990s, California is now seen as the tipping point for federal policy change and more state-level legalization throughout the country in the future. According to New Frontier and Arcview, California cannabis sales could reach an estimated $4.3 billion by 2020, while California legislative analysts anticipate State and local governments generating nearly $1 billion in annual tax revenue as the market expands.

The state is currently moving toward issuing new medical licenses, meaning the entire cannabis landscape will change in the coming years. Under this initiative, California’s newly established Bureau of Medical Cannabis Regulation would be renamed the Bureau of Marijuana Control, regulating the industry and issuing both medical and non-medical cultivation, processing, and retail licenses.

‍Maine Question 1 is a proposed measure to regulate and tax legal cannabis as an agricultural product. Unlike other states that direct alcohol control agencies to take control of adult use cannabis, this proposal would task the Maine Department of Agriculture, Conservation, and Forestry with establishing and implementing rules, as well as issuing licenses to cultivators, testing facilities, processors, and retailers. Upon passage, there would be a nine-month timeline for rulemaking. The state currently has fewer than ten licensed medical dispensaries, and Question 1 would not affect the medical marijuana program and its regulations.

‍Massachusetts Question 4 would legalize and regulate cannabis in a similar manner to alcohol, allowing for personal (home) possession of up to ten ounces of dried flower. A new agency, the Massachusetts Cannabis Control Commission, would be established to create rules and issue licenses. Existing medical marijuana treatment centers and caregivers will not be affected by adult use licensing requirements.

‍Nevada Question 2 would expand cannabis well beyond the state’s existing 40+ medical dispensaries. Retail store licenses under the new law would be allocated based on county population. Clark County, Nevada’s largest and home to Las Vegas, would be allowed up to 80 retail stores. Washoe County would be allowed up to 20, and all other counties would be limited to two licensed retail stores. During the first year of legalization, only existing medical marijuana cultivators, processors, and retailers would be able to apply for adult use licenses, and only registered wholesale liquor distributors would be able to apply to distribute cannabis. The Nevada Department of Taxation would be tasked with regulating and licensing cultivations, testing facilities, processors, and retail stores.

All of the following measures would allow for the possession and use of cannabis as a medical treatment, with the recommendation of a qualified physician:

‍Arkansas Issue 6 is one of two proposed medical marijuana legalization ballot measures in the state. This constitutional amendment, which would be impossible to be repealed by legislative action, would create a medical marijuana commission to issue licenses, while directing the Alcoholic Beverage Control Division to enforce regulations. Minimum license numbers would be 20 dispensaries and 4 cultivators.

‍Florida Amendment 2 is an expansion beyond the state’s existing Compassionate Cannabis Act of 2014, which allows for non-smokable, low-THC cannabis (hemp) for a limited number of qualified conditions and patients. The Department of Health would be charged with regulating and registering cultivators and dispensaries.

‍Montana Initiative 182 would amend requirements created by Senate Bill 423, lifting a three-patient limit on dispensaries and other legislative requirements that effectively shut down the medical marijuana program, first established in 2004 under Initiative 148.

‍North Dakota Measure 5 would create a program administered by the state’s Department of Health, and would create policies for cultivation and distribution of cannabis by compassion centers and caregivers.

Just as Election Day in 2012 and 2014 had a major impact on the future of legalization in the first four states (Colorado, Washington, Oregon, and Alaska), Tuesday will be a major turning point in state-level legalization. In these nine states, voter approval will only be the beginning. The next year or more will see ongoing conversations about the future of America’s legal cannabis market—with numerous questions to be answered in all of these states. Public policy discussions, particularly on public consumption, edibles, potency, and in some states, eligible medical conditions will be a big part of the rulemaking process in many of these states.

Legalization in Colorado and Washington on Election Day 2012 launched a yearlong process to establish the states’ respective markets. Oregon and Alaska, which legalized in 2014, are in the early stages of opening newly licensed establishments. Markets established by ballot measures on Election Day 2016 could be opened up sooner by emergency legislative action, as in Oregon, or move slower than expected, as in Alaska. Markets should be up and running in Arizona, California, Maine, Massachusetts, and Nevada by spring 2018.

Prospective business owners should continue to keep an eye on federal policy shifts, particularly focusing on banking and financial regulations as well as rescheduling/descheduling of cannabis under the Controlled Substances Act—two policy reform areas that will most likely come up in the next Congress.

‍For a detailed, state-by-state analysis of U.S. marijuana licensing, including market structure and state requirements, be sure to add your name to the growing list of people who want to be notified when the comprehensive reference guide, Tracking Marijuana Licenses State-by-State: 2017 Edition, is available!