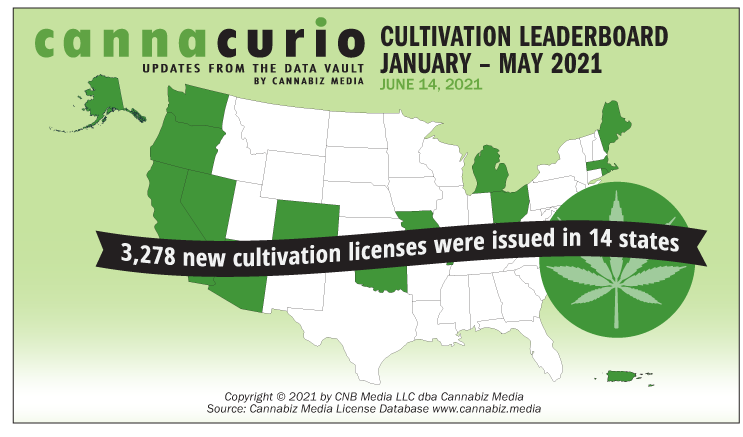 While we have all been watching the MSOs buy each other out over the last few months, the regulators have continued their efforts to issue licenses and enforce their rules and regulations. For this post, I want to focus on the where the new cultivation licenses have been issued, what it means for the total number of licenses, and what might it translate into in terms of expanded canopy size.

Through the end of May, 3,278 new cultivation licenses were issued in 14 states. As we have seen for the past several years, California and Oklahoma have been driving these license counts with California responsible for 37% and Oklahoma for 50%.  Michigan took third at 5.6% with Oregon fourth with 3.7%.

Not all states provide detail about canopy size in their licenses. Some issue broad tiers, others provide no information, and still others issue their cultivation licenses based on plant count. Below we have done an analysis of the cultivation licenses issued in California to determine how much canopy was licensed by the regulators.

Keep in mind that licensed does not necessarily mean operational, but it is a proxy for canopy growth. Also, we used the upper limit of the license range.

Here’s how the 282 acres stacked up by license type:

Figuring out cultivation size nationally is probably more art than science given the data gaps that exist. Currently, Oklahoma has 7,754 licenses according to the Cannabiz Media License Database – but there is no limit to how much cannabis an Oklahoma cultivator can grow. I’d enjoy hearing any estimates for how big the canopy is in Oklahoma.

At Cannabiz Media, Ed enjoys the challenge of working with regulators across the globe as he and his team gather corporate, financial, and license information to track the people, products, and businesses in the cannabis economy.

Ed graduated from Hamilton College and received his MBA from the Kellogg School at Northwestern University.