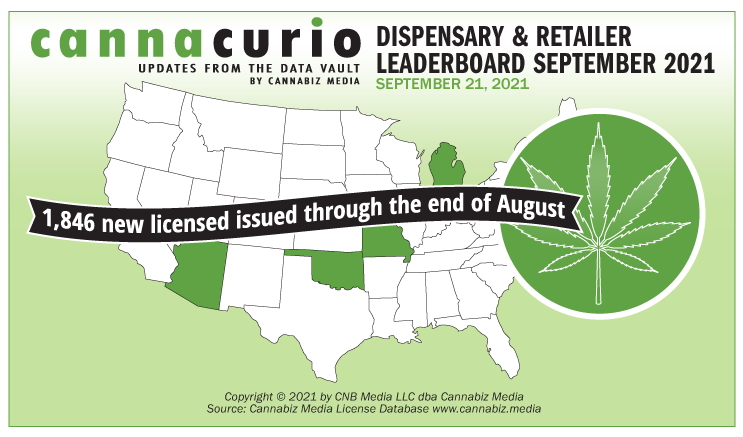 Dispensaries and retailers have continued to come online this year. We count 1,846 licenses issued through the end of August. Six states issued 100 or more licenses so far with Oklahoma, as usual, taking the lead.

The questions that invariably get asked by the market are about licenses not yet available: What about Illinois? Where are the New Jersey and New Mexico licenses? And Georgia!

What we’ve all seen play out since we started tracking licenses is that there is often a sizable lag in time from when the law is passed to the licenses being awarded, and then for them to actually become active. While Oklahoma started issuing licenses after six months, the timeline in many other jurisdictions is 18-24 months.

In the meantime, here’s our census of active cannabis dispensary/retail licenses. We currently estimate that 8,212 stores hold these 9,032 licenses since some stores hold a medical and adult license.

The year is still early, and we still believe that 2021 promises to be another year of license growth in some markets. Arizona unleashed 102 new retail licenses to existing dispensary license holders while West Virginia published their list of 100 permitted dispensaries. Georgia and Rhode Island are slated to issue licenses soon, and Illinois has teased their next round of license for quite some time. We’ll keep you posted in future Cannacurios.

In our last update on dispensaries and retailers back in March, we were looking ahead to new licenses coming on board from Rhode Island, Georgia, and Illinois. So far, Rhode Island has been a bust, Illinois decided who should get some of them but cannot issue them, and Georgia got theirs awarded. All eyes are still on New Jersey, New Mexico, New York, and Connecticut, so stay tuned!