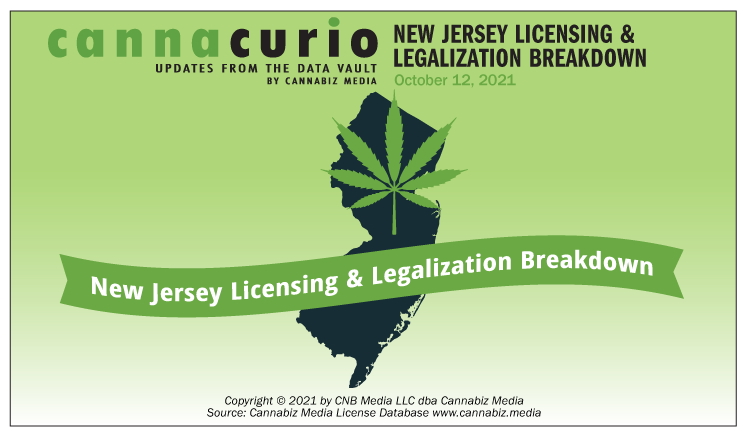 On the East Coast, three medical cannabis markets will soon be opening up for adult use. Connecticut, New Jersey, and New York have all legalized within the past year and are preparing to issue licenses and launch sales. Over the next three weeks, we’ll take a look at each of these markets and the current state of cannabis before each market evolves. This week, we’ll review New Jersey.

As part of the 2020 election, New Jersey voters approved a constitutional amendment to legalize cannabis. Question 1’s passage was expected, and the short constitutional change left many details for the legislature to sort out. Nearly a year later, the legislature has made progress and regulators have issued final rules to expand the medical industry into an adult use one.

New Jersey has historically been one of the stricter states as far as cannabis regulation is concerned. The market is currently controlled by a limited number of license holders, and home cultivation is prohibited.

Additionally, Justice Grown currently has a cultivation license only, and a few local operators also have cultivation and dispensary facilities. Late last summer, some of these MSOs continued expanding by opening additional stores under their existing licenses, which has allowed the state’s market to grow significantly.

Over two years ago, regulators attempted to open up the medical cannabis program further by accepting applications for over two dozen more licenses. The state’s Cannabis Regulatory Commission accepted nearly one hundred additional applications for dispensary and cultivation licenses, including MSOs, such as Harvest, Medpharm, and Vireo, as well as regional operators, such as NY-based Etain.

Litigation has delayed medical cannabis expansion, which may be a contributing factor to slow adult use licensing progress overall. This Friday, the state will award medical expansion winners — up to 24 licenses, including 15 new dispensaries, five cultivation sites, and four manufacturing licenses.

All medical cannabis license holders will be able to fast-track their transition into the adult use market if they pay a conversion fee and prove they can continue serving card-holding patients. These requirements are not unprecedented.

Many states, including Oregon and Washington, required license holders to convert their licenses from medical to adult use prior to entering the new market. Additionally, some states’ regulators required a percentage of stock be reserved for medical cannabis patients to alleviate the risk of a shortage as adult use sales launched.

It is noteworthy that no single community has more than one medical cannabis operation at this time, so no city will be flooded with legacy retail stores on day one.

The state’s Cannabis Regulatory Commission (CRC) defines each class. There is one class of license for each licensed activity: cultivation, manufacturing, distribution, delivery, and retail. Additionally, testing labs will be licensed, and entities can receive a conditional cannabis business license without specifying a class until fulfilling all of the requirements.

Additionally, microbusinesses will be licensed for each of the activities listed. As we’ve seen in other states, these facilities will be limited by the number of employees, facility size restrictions, and limits on the number of plants and amount of usable cannabis on-site each month.

For nearly the first two years of the program, the number of cultivation licenses will be limited. Unlike some recently established markets, including Illinois and Arizona, retail licenses will not be limited.

Fees vary depending on the license type, and for cultivation licenses, licensing fees vary by canopy size. Microbusiness licenses are priced lower — including application and annual fees. Standard cultivation licenses range from $5,000-$50,000, while retail stores run $10,000. License fees are the same from year to year, upon renewal.

CREAMM gives New Jersey communities a considerable amount of latitude to regulate cannabis businesses and licensing, and many cities and towns have opted for complete bans, at least temporarily.

Municipalities were given a deadline in late August, merely a few days after final rules were published. With limited time to make a decision, over 70% of the state’s local governments opted out.

According to the USA Today Network/Asbury Park Press, over 400 cities, towns, and townships have banned cannabis businesses. Elsewhere, over 40 communities have only opted out of retail licensing but will permit other activities. Additionally, nearly a dozen communities have only opted out of adult use sales, but will leave medical operations in place.

The state’s largest city, Newark, with a population of roughly 310,000, opted to establish license caps. Cultivation, manufacturing, delivery, and retail will be limited to five licenses each, and two retail stores will be able to have onsite consumption. Testing, distribution, and wholesale will each be limited to three licenses citywide. Zoning restrictions and other license requirements will also apply, as in many other municipalities. Similar caps will lead to reduced opportunities for businesses to set up operations, while also limiting future tax revenues.

While the timeline still remains unclear, medical cannabis businesses will likely feel the rumblings of the new market first. Existing businesses will have an opportunity to apply for combined medical and adult use licenses and also be forced to increase their capacity. Additionally, licenses will open up for everyone, including prioritized social equity applicants.

Regulators are also required to give 30 days notice before sales launch — on top of the many months required to issue licenses and build facilities. Operations in New Jersey likely will not begin until Spring 2022.