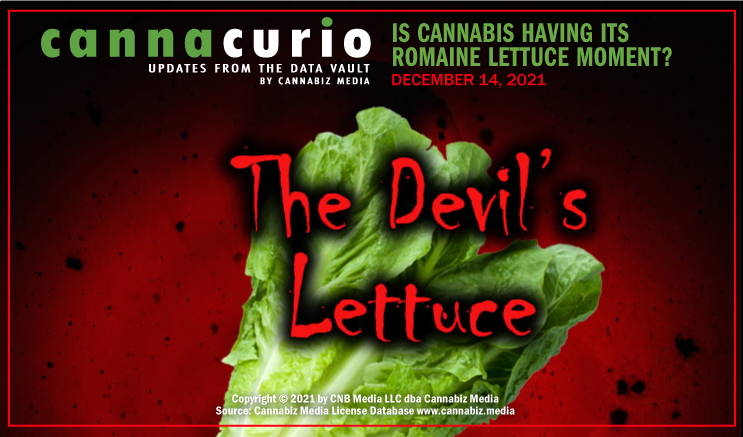 Cannacurio #50 - Is Cannabis Having Its Romaine Lettuce Moment?

At Cannabiz Media we have a unique view as to what is happening at the state level and across state lines. One trend we have spotted in the last quarter is the increase in product recalls, often tied to testing results. The dynamic reminded us of the frequent recalls of romaine lettuce in supermarkets, which left customers confused and having to substitute kale in their Caesar salad.

Here’s a recap of the recent recalls:

On the plus side, some regulators are taking their charge seriously to protect the public from harm. It signals to patients and stakeholders that this is an important obligation and that there are consequences for non-compliance.

There can be a downside to this hyper-vigilance when the protocol becomes “Fire, Ready, Aim!” This has happened in two of the cases above. In Ohio, a recall was issued and then a month later, the products were tested and deemed safe for patients. The recall in Michigan on November 17th has landed in court as the testing lab argues that singling them out was done for political reasons.

Neither of these scenarios is good for patients or consumers as it erodes trust in the institutions that should be protecting them: regulators and testing labs.

A recent news story in Connecticut was even more of a head scratcher in that the two labs in the state were testing for different levels of the same yeast and mold. According to CT Insider, “at the request of AltaSci Labs, the state Department of Consumer Protection agreed to raise the total passing level of yeast and mold from 10,000 colony forming units per gram to 1 million per gram for the lab. Meanwhile, at Northeast Laboratories, the state’s other cannabis testing facility, the passing limit remains 10,000 CFU per gram.”

Since only a small subset of people routinely buy cannabis in multiple states, patients will have to be knowledgeable and vigilant about protocols in their state. There are standards organizations that are trying to figure this out, but with so many jurisdictions with their own programs, it will take a long time for this to be resolved in a uniform manner.  Perhaps CANNRA can weigh in on this critical issue.

Regulators are going to regulate! As we were compiling the recalls above, notices arrived from Oregon, Washington, and New Mexico on their efforts to work with stakeholders to resolve this issue – and that is a great step.

NOTICE OF PROPOSED RULES - WSR #22-01-055 The Washington State Liquor and Cannabis Board (WSLCB) invites your input on proposed rules (CR-102) regarding cannabis quality control testing. This notice and other relevant rulemaking materials may be viewed at lcb.wa.gov/laws/laws-and-rules under Proposed Rules.

The Oregon Liquor and Cannabis Commission is providing the following information to recreational marijuana licensees. The bulletin is part of OLCC’s compliance education. It is important that you read it and understand it. If you don’t understand it, please contact the OLCC for help. Failure to understand and follow the information contained in this bulletin could result in the loss of your recreational marijuana license. Bulletin CE2021-03 covers the following issues:

The Cannabis Control Division of the New Mexico Regulation and Licensing Department on Thursday will hold a public hearing to gather input on new rules as well as amendments to existing rules involving quality control, inspection and testing of cannabis.

We do not see this issue resolving anytime soon but we are hopeful that the work of the above regulators in coordination with the Cannabis Regulators Association will bring about consistent standards, reporting and disclosure.  No one should have to contend with a kale Caesar salad.

Cannabiz Media customers can stay up-to-date on these topics as well as new licenses, companies, and executives through our newsletters, alerts, and reports modules. Subscribe to our newsletter to receive these weekly reports delivered to your inbox. Or you can schedule a demo for more information on how to access the Cannabiz Media License Database yourself to dive further into this data.

Cannacurio is a periodic column from Cannabiz Media featuring insights from the most comprehensive license data platform.