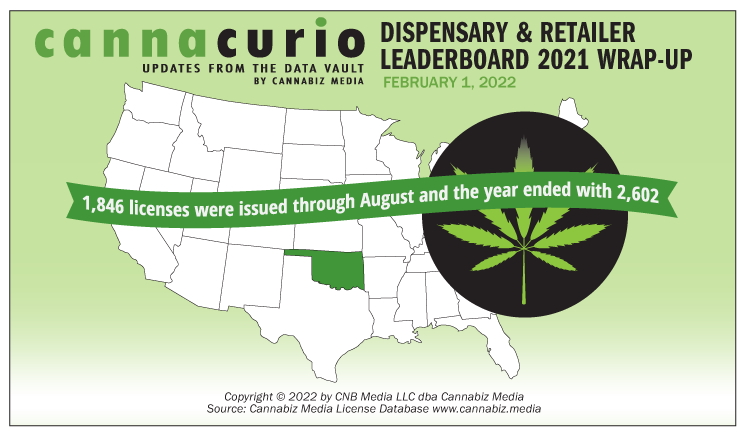 Dispensaries and retailers have continued to come throughout 2021. 1,846 licenses were issued through August 2021, and the year ended with 2,602 licenses. Seven states issued a hundred or more licenses with Oklahoma keeping the crown for issuing the most dispensary licenses.

In early 2021, industry observers were focused on states that could or would issue licenses like Georgia, Rhode Island, Illinois, and Arizona. Arizona issued new licenses quite promptly and its adult use program grew quickly. Later in the year, Rhode Island and Georgia selected license holders. However, the Georgia program is tied up in court, and one of Rhode Island’s licenses will be awarded at a later date. Lawsuits have dogged the Illinois program where 185 dispensary licenses are part of a super case that is dragging on.

For 2022, there is a lot of hype and excitement on new license programs in Connecticut, New Jersey, and in New York further down the calendar. The first mass issuance in 2022 will be in Ohio. We covered this in our last blog – where the state received 1,462 applications for 73 new licenses. The drawing is scheduled for January 27, 2022.

The table below shows the final Cannabiz Media tally of dispensary/retail licenses for 2021.

We fully expect 2022 to be another big year in license issuance as more states adopt programs and issue licenses. New programs, despite best intentions, take a long time to get off the ground, and any that are approved will likely have lengthy rule-making timelines and predictably, law suits. Any newly approved programs would not likely be operational until mid to late 2023.