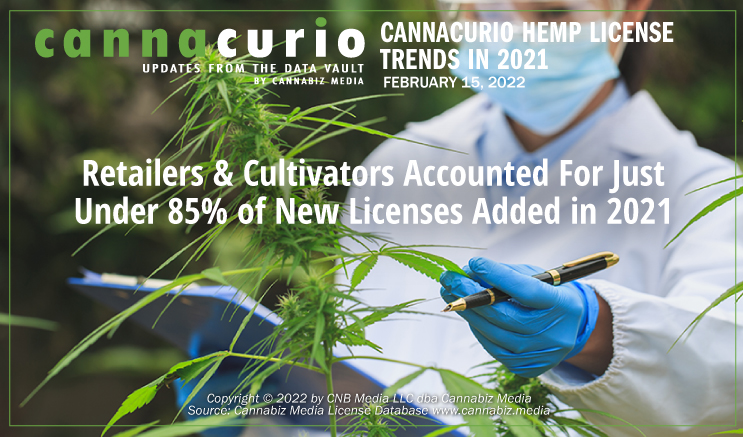 Cannabiz Media tracks every cannabis and hemp license that we can find. What’s been unique about hemp is how different states build out their licensing schemes.

In the hemp “growth years,” our database had almost equal numbers of cannabis and hemp licenses, mostly fueled by hemp cultivation licenses. Years of oversupply, however, have diminished the number of people seeking to grow hemp.

Trends to keep an eye on in 2022 include licensing at the retail hemp level as well as the growing role and influence of the Department of Agriculture.

In looking back on 2021, two categories stand out: Retailer and Cultivator. Together, they account for just under 85% of the new licenses we added to the License Database.

CBD Retailers are being licensed more frequently by regulators. We first wrote about Louisiana’s program back in 2019 when the state’s Office of Alcohol and Tobacco Control started to issue licenses to convenience stores, delis, gas stations, and grocery stores.

Driven by the federal legality of CBD, widespread adoption, and in some cases, to generate licensing fee revenue, we will likely see this in more states.

In looking at the quantities of new licenses issued, Cultivation and Retail account for the vast majority. While some of the other columns in the table below represent hybrid or stacked licenses that require multiple activities be performed, the other important activity is Processing.

In past years, processing had been a bottleneck in some markets and caused trouble for farmers who had not secured those resources early. With hemp being federally legal, this has become less of an issue as the crop can cross borders.

The other interesting license development is once again from the trailblazing state of Louisiana. The state has issued 25 hemp event licenses! We have seen cannabis event licenses, but only California and Michigan have issued these. The Louisiana application is extensive with lots of warnings and scary language – but good for Louisiana in being creative.

As the hemp industry matures, regulations get more complex. Hemp, like cannabis, was regulated at the state level. However, with the passing of the 2018 Hemp Bill, the licensing of hemp production for states and tribes is now approved by the US Department of Agriculture. According to the USDA, the regulator has weighed in on 106 plans that span states, territories, and tribes with a variety of statuses:

Last fall, the National Agricultural Statistics Service surveyed about 20,000 American hemp farmers to gain insight to the hemp market. The “Hemp Acreage and Production Survey” collected information on the acreage, yield, production, price, and value of hemp in the United States. The survey will provide needed data about the hemp industry to assist producers, regulatory agencies, state governments, processors, and other key industry entities.

“This inaugural hemp survey will establish a necessary benchmark and provide critically-needed data for the hemp industry,” said NASS Acting Administrator Kevin Barnes. “The information collected can help inform producers’ decisions about growing, harvesting, and selling hemp as well as the type of hemp they decide to produce. The resulting data will also foster greater understanding of the hemp production landscape across regulatory agencies, producers, state and Tribal governments, processors, and other key industry entities.”

The information that will be released on February 17, 2022 could have large implications for industry participants. It may help the industry get a better understanding of multi-state operators as well as large single state operators. Some industry pundits suggest that in 2022, cultivated acreage may stay the same, but the number of license holders may decrease.

So in addition to being eligible for programs like crop insurance, the hemp industry benefits from the full suite of services that the Department of Agriculture provides to many industries. Secretary of Agriculture Tom Vilsak recently referenced hemp as he spoke about $1 billion in grants to support climate-friendly farming.

We expect to see robust hemp licensing to continue and Cannabiz Media will be monitoring the retail and distribution licenses especially as it focuses on the end of the “seed-to-sale” continuum. Also, the USDA filling multiple roles as licensor, funder, and publisher will greatly impact the industry in 2022 and beyond.