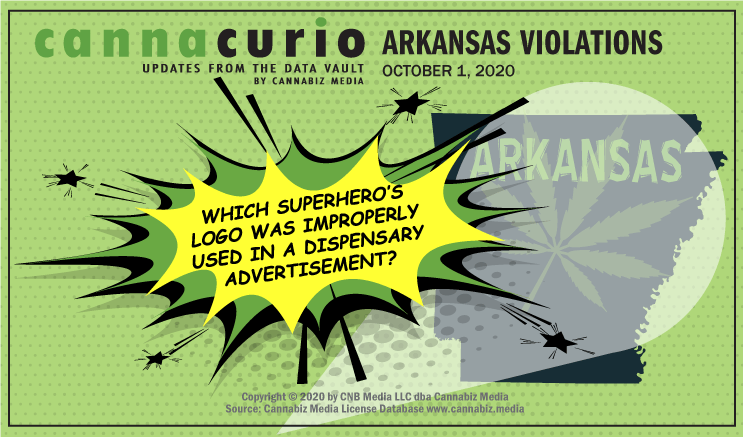 Cannabiz Media recently worked with an Arkansas-based intermediary to obtain copies of complaints, violations and fines issued by the Alcoholic Beverage Control Division (ABC). We were furnished with 60 pages of documents that outlined 56 violations committed by 12 of the state’s license holders. Cannabiz Media has been tracking violations and fines since our founding because we believe this information is very useful for those conducting business, sales and competitive intelligence.

The material we received covered the last twelve months. In that time there were sixteen settlements that covered the 56 violations. Some firms were hauled in front of the Arkansas ABC more than once. In looking at the categories of violations, here’s the leaderboard:

In addition to the Batman incident, Fiddler’s Green (CNB AR-025835) was cited for failure to keep adequate video surveillance. .

In addition to the $9,100 fine above, a $74,500 fine was held in abeyance and would be set aside upon successful completion of their 30 day probationary period.

Why Is This Significant?

We think this information is enlightening for several reasons:

We’ve covered Colorado and Florida in blog posts earlier this year and have amassed over 4,300 violation records in the database. The largest fine we found in Colorado was $200,000 while an early one in Connecticut was for $300,000. Harvest was issued a $500K fine in Ohio to settle a social equity misrepresentation charge. We will add these violations into the database along with the full text documents received from the regulator. These interactions between the regulator and regulated provide an important window on how our industry is viewed from the outside.   Washington State leads the way in transparency, along with Oregon and Maryland. Arkansas, Connecticut and Florida – among others require a written request while Colorado issues only a yearly list.

What Consumers Want from CBD Brands