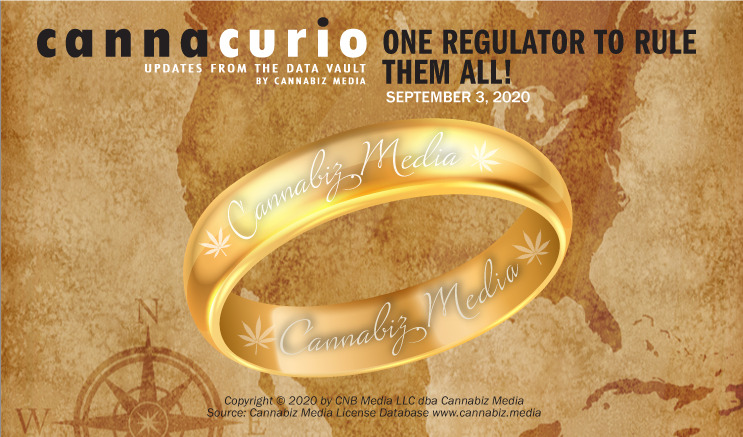 Cannacurio: One Regulator To Rule Them All!

As the licenses in the Cannabiz Media database broke the 100,000 threshold earlier this year, we looked for ways to help our users take better advantage of all this information. Jason Kikel, our Director of Regulatory Research came up with the most recent enhancement by adding a field to track which regulator issued the license. One of the drivers for Jason was the emergence of licenses that were not issued by states. The US Department of Agriculture oversees state and tribal hemp cultivation programs. Additionally, the agency has a registry of over 60 DEA-licensed analytical testing labs and issues producer licenses for some hemp farmers. Here's what we found found in reviewing the regulators:

Which States Have The Most Licenses?

We put leaderboards in most of our blog posts to provide a sense of scale. In the preceding table the distribution of cannabis and hemp licenses varies by state. California and Oklahoma are at the top thanks to cannabis. Florida is there due to CBD Retail licenses. Tennessee, North Carolina and Virginia are packed with hemp cultivation licenses.

Markets like California, Colorado, Oregon and Washington are particularly notable because they have both hemp and cannabis licenses that include cultivation and processing. This makes them excellent markets for ancillary vendors that sell products like soil enhancements, extraction equipment and even greenhouses.

Which States Have The Most Regulators?

We have seen a variety of regulatory structures unfold as states have come up with new and novel ways to regulate the plant. Here are the states that have the most regulators:

On the hemp side, most states use an existing regulatory infrastructure. It is viewed as another “crop” and is treated as such. With cannabis states tend to create a new monolith to handle the regulations – which actually makes sense given its federal status.

The table above shows the largest hemp regulators that we have identified. Florida’s numbers are driven by the thousands of CBD retail licenses they have issued. The remaining states have licensed thousands of cultivators.

As we have documented for the past few years, Oklahoma leads the nation in licenses and they are all issued by OMMA (Oklahoma Medical Marijuana Authority). California’s three regulators all make this list along with mature market states like Colorado, Washington and Oregon. Michigan is a market to monitor as some experts think it could be second in size to California.

Why Does This Matter?

The interesting point is comparing regulators and the state markets is how the perception can change when you combine hemp and cannabis. Cannabiz Media is tracking close to 35,000 active hemp and cannabis cultivation licenses. We think that knowing that Oregon’s 2,285 cultivators are split almost half and half between cannabis and hemp is an important piece of information as you plan your marketing strategies for Q4 and 2021.

In addition, it is vitally important to follow the federalization of regulation of the testing labs and hemp plans. Some experts believe that these approaches may be part of how a federal cannabis regulatory scheme comes together.  While there may never be "one regulator to rule them all" - this is a trend to monitor.