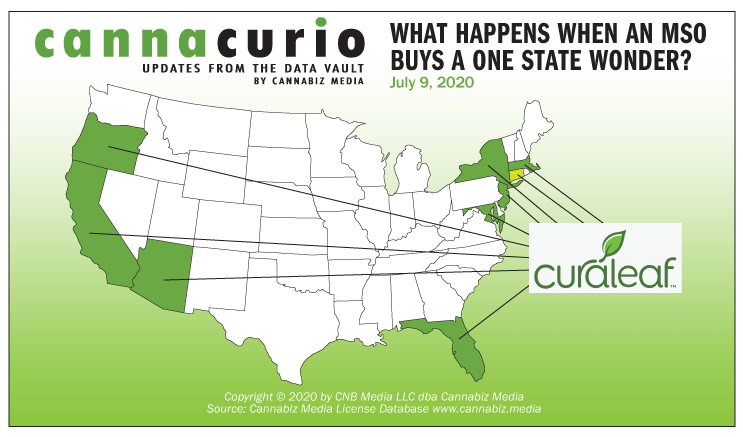 Cannacurio: What Happens When an MSO Buys a One State Wonder?

In the realm of Cannabis M&A activity, Curaleaf’s purchase of the three Arrow Alternative Care (AAC) Dispensaries in Connecticut will not land on any league table or leaderboard for size of deal or industry impact. The deal was simply noted with a Canadian SEDAR Filing on April 6th in the form of a press release. Deal size aside, we wanted to share what we look at on the data side when a public company or MSO announces a deal.

Curaleaf LLC began cultivating and processing medical cannabis in Connecticut in 2014. Today, Curaleaf LLC is one of four licensed growers in Connecticut and operates a 60,000 square foot cultivation facility in Simsbury that provides cannabis products to over 40,000 patients throughout the state. The AAC acquisition allows Curaleaf to be vertically integrated in the state, providing products to the patients directly as well as through existing wholesale channels. Strategically placed in key metro areas, AAC has established itself as a market leader in Connecticut, operating three out of the 18 total dispensaries in the state. AAC's first store opened in Hartford in 2016, the second in Milford in 2017 and the Stamford store opened to customers in January 2020.

What’s interesting is the changes that this acquisition necessitates:

2. There are now a number of Curaleaf entities in Connecticut, including the original cultivator/manufacturer in Simsbury:

3. We also checked with regulator who confirmed that “the Department has recently approved the purchase”. This is an important step because too many deals never happen and we don’t want to make changes to the database if the regulator has not approved it.

Why Is This Important?

Cannabiz Media strives to provide timely, accurate and comprehensive information about the licensed entities in the cannabis marketplace. Tracking down the changes at public companies presents unique challenges. Many large Multi-State Operators have been fined by regulators for flouting license caps by entering into operating agreement to run licenses. Acreage Holdings was fined $300K last October in Ohio and Harvest ran into similar trouble in Pennsylvania.

In the case above the research team reviewed SEDAR filings in Canada, Secretary of State information in Connecticut as well as license date from Connecticut’s Department of Consumer Protection. The record above also has information on the two principals, six social media accounts, and three news stories about the license as well as the original applications Arrow filed to obtain the license.

Where Cannabis Brands Should Invest Their Social Media Marketing Budgets