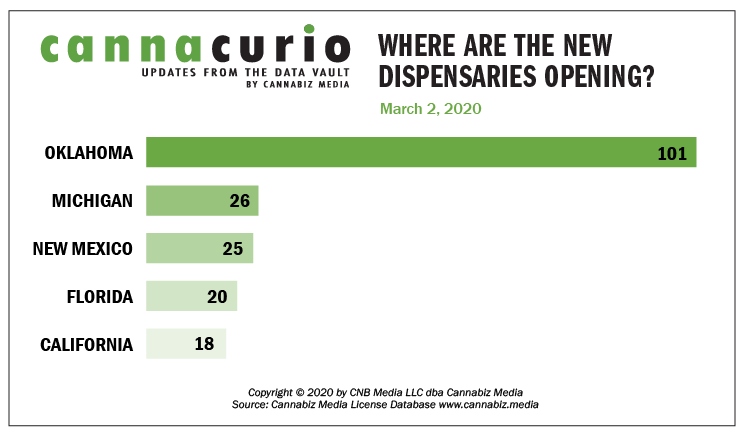 Cannacurio: Where Are the New Dispensaries Opening?

Two months into 2020 and it’s time to take a look at the retail & dispensary landscape. So far this year Cannabiz Media has tracked 256 newly active dispensary/retailer licenses from 14 states. We’ll look at where they opened and who brought them online in this week’s post.

In reviewing the tradenames/companies – there are a few that opened multiple storefronts since the beginning of the year. Here is a list of the leaders:

A lot of words have been written about the Oklahoma market since they began their program and issued a torrent of licenses. Looking at the active licenses issued in the last 14 months, the rate is waning and it supports the idea that a saturation point has been reached. However, Q12020 is not over yet and we’ll revisit these numbers in April.

Because each state is its own sovereign nation when it comes to cannabis it is hard to extrapolate trends across states. Alaska added a lot of licenses because many pending ones finally made it through a very long queue while New Mexico’s increase was likely fueled by plant count increases. Illinois and Michigan added new rec licenses while Massachusetts continued the slow pace that has dogged their program since the medical only days. Each state tells its own story and we’ll keep mining the data to keep you informed.

‍Cannacurio is a weekly column from Cannabiz Media featuring insights from the most comprehensive license data platform.