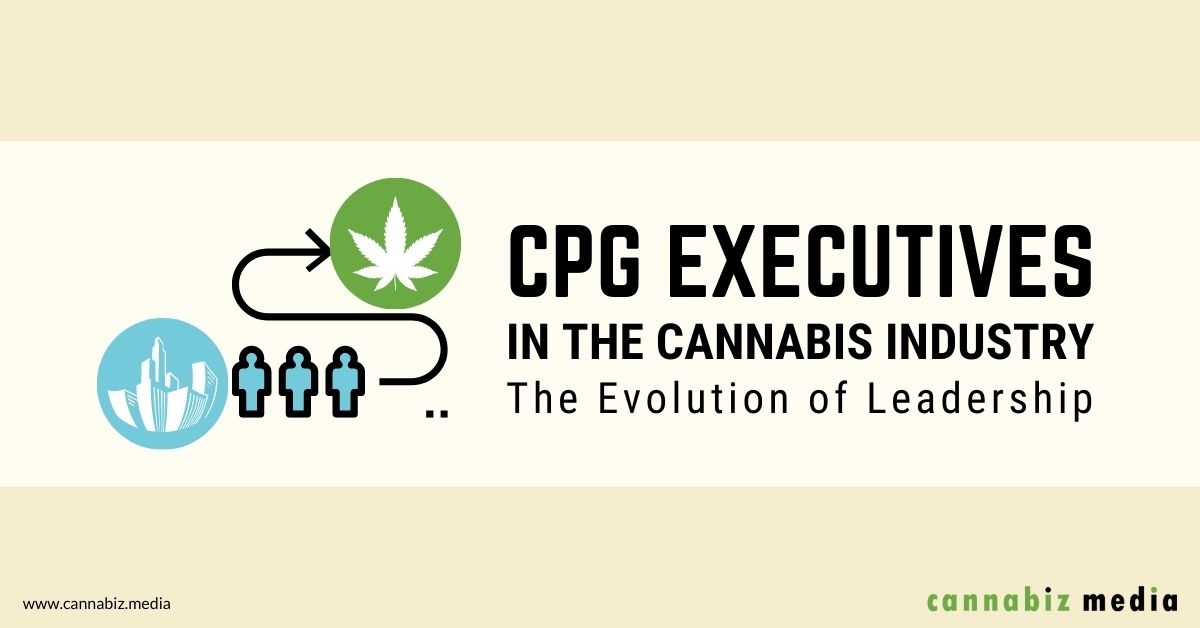 CPG Executives in the Cannabis Industry – The Evolution of Leadership

A migration is happening. Executives from consumer packaged goods (CPG) companies are moving into the cannabis industry to fill leadership roles for large multi-state operators (MSOs), startups, and every type of cannabis company in between.

With their transitions to the legal marijuana industry, these executives bring deep experience from verticals like food, beverage, retail, pharmaceuticals, and more. It’s a win-win situation for both growing cannabis companies and executives who have proven track records of success.

The primary reason cannabis companies hire CPG executives is to gain leadership expertise as they prepare to scale. The cannabis industry is growing faster than ever, and many companies that were started by cannabis enthusiasts and entrepreneurs have grown to the point where they now require leadership expertise that the founders simply don’t have. To get to the next level of success, these companies require leadership teams who know what to do and how to do it successfully.

It makes sense that cannabis companies would turn to CPG to recruit executives. Cannabis products are often sold as supplements, topicals, and edibles, which means there are many similarities to food, beverage, and beauty products. With national legalization on the horizon, bringing in this type of talent now is likely to delivery exponential returns in the future.

For example, Cresco Labs – one of the largest vertically-integrated MSOs in the United States – hired Ty Gent as its Chief Operating Officer (COO) in early 2021. Gent brought with him more than 35 years of CPG and supply chain leadership experience in executive roles for US Foods and PepsiCo. Cresco Labs announced it hired Gent in part because he has a track record of taking operations to the next level while optimizing integrated supply chains.

In 2020, Cronos Group hired Kurt Schmidt as President and Chief Executive Officer (CEO). Schmidt brought more than 30 years of CPG experience to Cronos with executive roles at Blue Buffalo Company and Nestle S.A. Cronos Group revealed its reasons for hiring Schmidt included not just his CPG experience but also his track record of partnering with founders of late stage startups to accelerate growth.

Another great example of a cannabis company hiring executives with vast CPG experience is Parallel (formerly Surterra Wellness). In 2019, the company recruited executives from multiple CPG leadership roles, including Fareed Khan of Kellogg as CFO and William “Beau” Wrigley, Jr. as CEO (who was heir and CEO of the Wrigley’s confectionery company, which was sold to Mars in 2008).

CPG executives move to cannabis companies for a variety of reasons, but the most talked about are financial potential and the opportunity for innovation and significant growth.

Also in 2021, Leafline recruited Scott Shilling to be its CEO. Schilling brought with him experience in leadership roles with Diageo, Unilever, and AB InBev. Upon accepting the position with Leafline, Schilling stated he was excited to lead the company at an important inflection point for both the business and the maturing cannabis industry.

The migration from CPG to cannabis isn’t just happening in the United States. In Canada, BevCanna recruited Raffael Kapusty as Vice President of Sales and Insights. She spent 25 years working in the U.S. and Canadian retail industries with roles at Ice Age Glacial Water Company, Kruger, SC Johnson, and Unilever Canada. At the same time, BevCanna recruited Bill Niarchos as Vice President of Sales and Sales Operations. Niarchos brought 20 years of experience working for companies like Bayer, Colgate Palmolive, Walmart, Costco, and more.

It’s important to note that the migration from CPG to cannabis isn’t a new phenomenon. It’s just getting more common. Back in 2019, John Griese already had two leadership roles in the cannabis industry before moving to Supreme Cannabis as its COO. However, he had spent years in leadership roles for PepsiCo and Nestle before he moved to the cannabis industry. Why did Griese join Supreme Cannabis? He explained, “I wanted to work alongside the most passionate people at a company that was shaping the industry.”

Bottom-line, promises of future equity, bonuses, stock options, and other financial rewards are certainly part of the reason CPG executives are migrating to the cannabis industry, but money isn’t the only reason. Excitement, innovation, passion, and a desire to build something are also very important to many of these experienced leaders.

Key Takeaways about CPG Executives in the Cannabis Industry

As the cannabis industry continues to mature, recruiting executives from CPG companies will become more and more common. There comes a point in every company’s lifecycle where leadership usually needs to change in order to get to the next level of growth.

That’s when an executive team with experience leading through a similar growth cycle, understanding and avoiding obstacles, and identifying opportunities will be critical to the cannabis company’s success. Many of those new cannabis team members will be found entrenched in CPG companies.

You can keep track of cannabis license holders, key contacts, and more in the Cannabiz Media License Database. For comprehensive financial analysis data, M&A targeting, and valuations subscribe to Cannabiz Intelligence™ – the business intelligence base for the cannabis and hemp industries. Schedule a demo to see it in action.