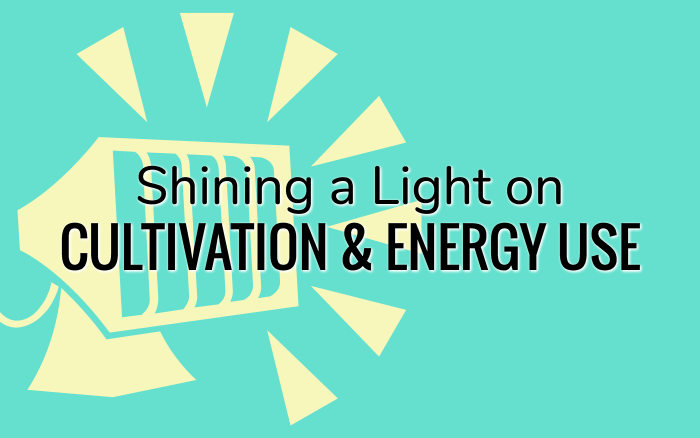 Shining a Light on Cultivation and Energy Use

Sustainability — both economic and environmental — has been a major consideration in the cannabis industry for years, and as more states approve medical and recreational cannabis, the use and overuse of resources becomes a bigger concern.

One of the key topics of conversation has been energy consumption from indoor cannabis cultivation, which reportedly generates a $6 billion in energy costs each year and uses approximately 10 times as much energy per square foot as a typical office building.

According to Evan Mills, a University of California at Berkeley research affiliate and energy analyst, that’s equal to the amount of energy used to power 1.7 million U.S. homes. In addition, the greenhouse gas pollution from indoor cannabis cultivation is the same as that generated by 3 million cars.

In California, where the largest amount of cannabis is grown in the U.S., indoor marijuana cultivation is responsible for 3% of all electricity used in the state. In Denver, Colorado, indoor cultivation accounts for almost 4% of the city’s total electricity use.

The Dirty Side of a Rapidly Growing Market

During my previous research looking at land use and water issues in the industry, I discovered the high electric grid demands of marijuana cultivation sites — an industry problem that occurs at both licensed and unlicensed facilities.

The cannabis space continues to suffer from a lack of peer-reviewed studies looking at resource use, but Mills’ report, “The Carbon Footprint of Indoor Cannabis Production,” highlights an ugly reality of growing cannabis indoors — it consumes 1% of our nation’s electricity.

The paper compares energy use in the cannabis sector to that of other sectors, including:

These issues have drawn the attention of utility companies and regulators nationwide, including in states where marijuana policy shifts have yet to occur. For example, Efficiency Vermont is actively working with suppliers and growers to identify the best lighting and growing methods for energy efficiency and will develop incentives for dehumidification, HVAC, and lighting.

With high projections set for market revenue, focus shifts toward energy demands on the production side. Measures of sustainability for cannabis cultivation, and how to achieve them, have yet to be agreed upon as the market continues to evolve nationwide.

In addition to energy consumption, water and other natural resources are part of the sustainability conversation in the marijuana industry. At the 5th Marijuana Business Conference & Expo, a variety of sessions touched upon these issues.

One such session, Cultivation Workshop: Reducing Energy Use & Lowering Costs Through Sustainability, presented by Kathleen Hokanson (of Koan Energy Consultants) and Matthew Gaboury (of Cultivar) highlighted a major industry concern — staggering energy and water demand and cost — alongside ways for new and existing cannabusinesses to enhance their triple bottom line (social, environmental, and economic bottom line).

The presenters discussed how building and business operations affect the resource needs of a site — and the roles of automation and technology — as well as the variety of power sources available geographically, including renewables. In some markets where solar, wind, and geothermal are not available, credits are representing the environmental attributes of renewable energy.

Additionally, a number of tax credits and other incentives are available. The Obama Administration extended tax credits for wind and solar through 2020, while other federal, state, and local rebates incentivize inclusion of green technology. These policies weren’t established with the cannabis industry in mind, although the Oregon Energy Trust, a state-chartered organization, leads the way in educating and assisting cannabis cultivators. The energy trust has made available cash incentives for cultivators, which could cover up to 50% of project costs.

Technology is playing a significant role in sustainability for cannabis cultivators. Energy efficient lighting and solar panels are just two ways cannabis growers are saving resources and money in the long-term.

For example, a new type of lighting manufactured by G2V Optics is already being tested in Canada. The G2V lights are reportedly twice as effective as other grow lights in testing at Endless Sky Canna Corp in British Columbia. In addition, Green Hygienics Holdings is investing in cultivation and aeroponics technology to reduce the cost of production and maximize yield while being highly environmentally-friendly.

You can expect to see more technology developed in support of sustainability initiatives in the near future.

When deciding to launch or expand cannabis cultivation operations, have a plan in place and know the geography you wish to work in early on:

In many cases, cannabis cultivators want to be as environmentally-friendly as possible, but local regulations can make it difficult to do so. Ultimately, the investment in sustainability initiatives will pay off in the long-run despite the short-term challenges.