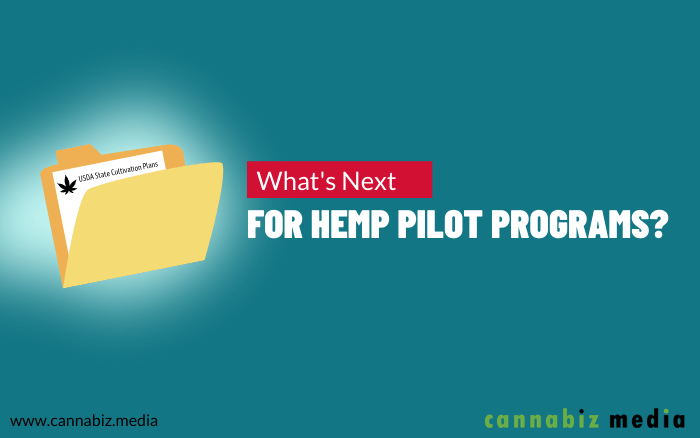 What’s Next for Hemp Pilot Programs?

In December 2018, President Trump signed an updated Farm Bill that dropped these requirements, establishing a more broad industrial hemp economy nationwide. This did not include a pathway to CBD legalization, or any provisions for consumable hemp/cannabinoid food, cosmetics, or supplements. This only established a framework for hemp cultivation.

Some states do regulate hemp processing, manufacturing, distribution, and even retail sales, in a parallel manner to regulating marijuana markets. This blog will explore the current status of hemp pilot programs and federal cultivation plan approval.

USDA oversight launched earlier this year as part of the Farm Bill implementation. Currently, federal law allows states, Indian tribes, and territories to regulate hemp cultivation on their own, but only after they submit regulatory plans to the USDA for approval.

As part of the USDA’s hemp framework, the agency also established a federal cultivation licensing program for farmers in states, territories, and territories not interested in developing hemp cultivation.

USDA approval of a state plan doesn’t necessitate large changes to a hemp program or the hemp industry in a given state. At the same time, states may abandon licensure of individual activities. Washington State chose to do this earlier this season by eliminating licensing requirements for hemp processing and other licenses previously established by the state’s pilot program.

When the interim rule was initially adopted in October 2019, states were given a year to submit plans for federal approval and transition out of pilot program phases. Late last year, USDA announced the first states to receive plan approvals: Louisiana, Ohio, and New Jersey. In the following months preceding the current cultivation season, additional states and tribes received approval.

The process moved slowly in the beginning. At the beginning of the current hemp season, there were more states operating under pilot programs authorized years ago then there were with approved plans.

By mid-July, 23 states continued under pilot programs, while 21 had plans approved. Some states and territories were working on legislation or plan drafting, and only two states opted for USDA issuance: New Hampshire and Mississippi. Numerous other states had plans under review.

The USDA did not rush to approve more plans over the summer, but nearly half of the previously-declared pilot states moved into the “Under Review” column, with the expectation that pilot programs would end this season.

As of mid-September, four more state plans had been approved with 12 states’ plans under review. As plans were subject to federal scrutiny and approval over the summer, state agricultural regulators and the USDA were under the impression that the interim rule would expire at the end of this week: on October 31st; a deadline for plan submission and a sunset date for existing pilot programs. Some state regulators began to panic over flaws in proposed rules, including testing requirements and potency limits.

Confusion continued to ensue for farmers in a handful of states: Hawaii, New York, and Virginia. Regulators determined that they would be unable to manage their programs due to the expectations laid out in the final rule and the rollout of new regulations. In a letter to growers this August, New York Agriculture Commissioner Richard A. Ball expressed displeasure with the current interim final rule, noting:

“It is the Department’s view that many of the requirements concerning the scope and timing of sampling and testing, the disposal of non-compliant plants, and reporting are unrealistic and impose unreasonable burdens on growers and any state interested in administering a compliant program."

At the time, the state decided to abandon regulation of hemp cultivation, forcing farmers to apply to the USDA for licenses that would take effect on November 1st. Similarly, in mid-September, the Virginia Department of Agriculture and Consumer Services and the Hawaii Department of Agriculture announced to growers the need to apply for federal licenses. In total, the decisions of these regulators would impact over 3,300 licenses.

Farmers began to apply for USDA producer licenses, but the game changed again on October 1 when President Trump signed into law a continuing appropriations resolution funding the federal government into December. One component of this is extending hemp pilot programs until a new sunset date of September 30, 2021.

With these changes, New York and Virginia rescinded their plans to opt for federal licensing, and are instead continuing into 2021 with their own pilot programs to the relief of thousands of license holders. As of this week, Hawaii will still discontinue its program and opt for USDA support in licensing its small but gradually expanding hemp industry. Regulators have conveyed to growers that the continuation of the pilot system will include sampling and testing requirements until later in 2021, as indicated by one letter from the Virginia Department of Agriculture and Consumer Services.

As of yesterday, 30 states have now seen their cultivation plans approved, and 10 states have their plans under review. These plans may be sent back to state regulators for changes, but they are likely to all be approved before planting in the spring.

Only five states are continuing into next season with pilot programs: in addition to New York and Virginia, they include Montana, North Carolina, and Rhode Island. It is worth nothing that Montana, New York and North Carolina are three of the top 10 states in the country for hemp by acreage according to a summer report by Hemp Business Daily. Changes in store for 2021 and beyond in those states remain to be seen.

Earlier this season, the number of states continuing to operate under pilot programs indicated one of two things: the lack of clarity and need for more time to prepare plans that would pass federal approval and displeasure with the progress made under the interim final rule. A second public comment period was opened earlier this fall, and some states, including New York and Hawaii, expressed concerns and opposition publicly.

In the 2021 season, remaining states’ regulators may continue to voice concern, alongside other industry stakeholders, such as individual farmers, agricultural trade groups, testing laboratories, and other cannabis activists.

At this rate, given the number of states with plans approved and under review, it seems unlikely that pilot programs would secure any further extensions into 2022. Federal regulators and Congress may be more likely to improve the existing framework, by regulation or modifying the Farm Bill; and any further federal changes would impact growers nationwide regardless of which agency issued the license.