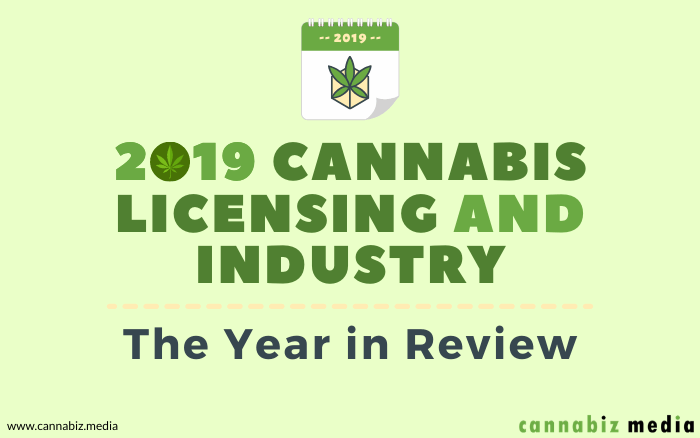 2019 Cannabis Licensing and Industry – The Year in Review

Throughout 2019, the cannabis industry and cannabis licensing remained in a state of flux. However, growth continued with more states legalizing and launching adult-use cannabis programs (like Michigan and Illinois) and multiple states rolling out new and enhanced medical marijuana programs (like Ohio and Louisiana). In addition, more than half of all states (a record number) considered legislation during the year to legalize cannabis possession or use.

At the same time, big industry stories broke over the course of the year. Along with large-scale mergers and acquisitions and other positive stories, companies in the cannabis industry faced old and new problems. CannTrust Holdings and Curaleaf Holdings were just two of the companies that had troubles with regulators, and Canopy Growth was in the news after the company let go its CEO, Bruce Linton. In addition, underperforming earnings and growth were a common trend among some of the biggest industry players.

Despite the challenges of operating in the cannabis industry, there is no stopping its progress as 2019 comes to a close. A Pew Research Poll released in November reported that 67% of Americans support marijuana legalization, and only 8% of Americans believe that cannabis should be illegal for either medical or recreational use. The data shows this industry’s momentum is likely to continue to grow stronger in 2020 and beyond.

With that said, let’s take a look at six of the cannabis licensing and industry stories that caught our attention here on the Cannabiz Media blog during the past 12 months.

During the months of 2019, the number of active cannabis business licenses grew significantly. Oklahoma was awarding licenses at a breakneck pace, and the number of licenses in California skyrocketed at the beginning of the year as the state rapidly processed temporary licenses.

Things have started to shake out in California, and a Cannabiz Media analysis released in September found that despite what most people assume, California is not the state with the most licensed cannabis dispensaries, manufacturers, or cultivators. It’s not Colorado either.

At the time of the report, Oklahoma led the pack with more than three times as many dispensary licenses as California as well as more manufacturing and cultivation licenses.

In January, Oregon faced a cannabis oversupply problem. The Beaver State wasn’t alone. Washington and Colorado have also suffered from oversupply issues. While Washington capped the number of licenses allowed to mitigate the problem and Colorado stopped accepting license applications, Oregon’s legislators increased the amount of cannabis that patients could purchase and opened the doors to delivery in areas where retail sales had been banned.

In addition, Oregon’s legislators introduced legislation that would allow the state to export its cannabis to other legal states. At the same time, legislators considered license caps and reducing canopy sizes.

There is no doubt that a state’s regulatory framework can lead to imbalances in cannabis supply and demand (both oversupply and undersupply). There isn’t a simple solution at this point since cannabis is still an industry made up of a patchwork of state-specific rules. Clearly, the problem remains to be solved on a broad basis in the coming year.

Alaska, California, Colorado, and Massachusetts each offered some type of onsite consumption license in 2019 – either for consumption at cannabis retail establishments (Alaska) or at other offsite locations. Other states, like Maine and Oregon are still working on rules and bills for cannabis lounges and onsite consumption.

One of the biggest challenges to onsite consumption licenses has been local rules. Even in states where onsite consumption licenses are available, local municipalities can ban establishments that allow legal marijuana activities, like cannabis lounges and cafes. This has been a significant problem in states like California and Nevada where the tourism industry needs places for visitors to consume the cannabis products they legally purchase within those states.

The cannabis industry was buzzing about hemp in early 2019 after the 2018 Farm Bill passed in December 2018. Everyone waited to see how states would respond. In 2018, 23 states grew a total of 78,175 acres of hemp with Montana and Colorado growing the most by far according to the 2018 U.S. Hemp Crop Report from Vote Hemp.

The industry was growing but with caution until the USDA released its hemp rules. Once the USDA’s hemp rules were released on October 29, 2019, states could write their own rules and submit them for approval by the USDA. It’s highly likely that the hemp industry and hemp licensing will continue to grow exponentially in the coming year.

There are many marijuana-related bills sitting at various stages of review across Congress, but two of those pieces of legislation were the subject of historic votes by U.S. lawmakers. In September, the U.S. House of Representatives passed the Secure and Fair Enforcement Banking Act (the SAFE Banking Act), which could solve many of the banking problemsthat cannabis and hemp businesses have faced if it is signed into law eventually.

In November, the House Judiciary Committee passed the Marijuana Opportunity Reinvestment and Expungement Act (the MORE Act), which would remove criminal penalties for cannabis, remove cannabis from the federal controlled substances list, expunge conviction records, and invest money through a 5% federal retail sales tax on cannabis products into communities that have been disproportionately affected by the war on drugs and prohibition. The measure has passed to the full House and will hopefully be in the news in 2020 when the House reviews it.

For provinces that opted for private retail operations, success may be tied to the retail licensing scheme enacted by each province. However, the private retail model has been more successful overall than the public retail model.

Key Takeaways about Cannabis Licensing and the Industry in 2019

As we’ve come to expect from the cannabis industry over the years, change is the norm, and 2019 was certainly filled with a lot of change. In fact, more changes will come in 2020 as cannabis and hemp continue to normalize in the U.S. and legislators review additional marijuana-related measures.

Throughout all of the changes, Cannabiz Media will be tracking cannabis and hemp licenses in the Cannabiz Media License Database. Schedule a free demo and see how it can help your business in 2020 and beyond.