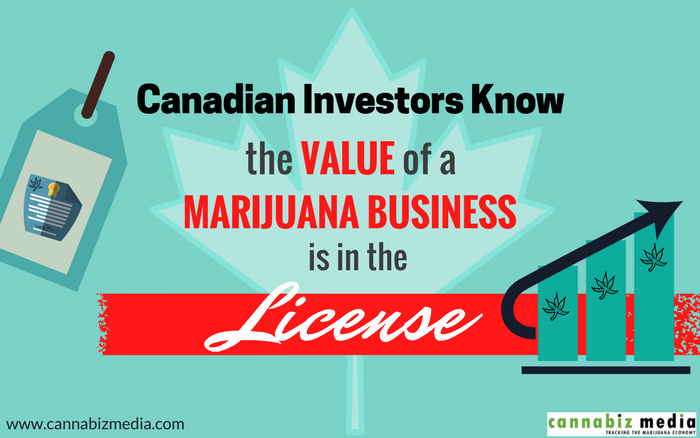 Industry News
State News
Finance
Be the first to know when new content like this is available!

A significant part of the value of a marijuana business is its marijuana license. This is a fact that Canadian investors and companies understand, and it’s prompting many of them to invest tens of millions of dollars into U.S. marijuana businesses.

For example, in May of this year, Liberty Health Sciences of Toronto spent $40 million to buy Chestnut Hill Tree Farm, one of just nine companies that currently hold marijuana licenses in the state of Florida. Through an exclusive management agreement, Aphria Inc., one of Canada’s largest marijuana producers, will manage and operate Chestnut’s growing, processing, and dispensing of medical marijuana in Florida.

This was the second big move toward U.S. expansion for Aphria this year. In March, the company announced it acquired an interest in Copperstate Farms, LLC, a licensed producer of medical marijuana in the state of Arizona. One month later, the company announced a $25 million U.S. expansion strategy called Aphria USA, which shows just how committed it is to the U.S. marijuana market.

Another Canadian company that is actively pursuing investments in and acquisitions of U.S. marijuana and marijuana-related businesses is The Canadian Bioceutical Company, which is headquartered in Toronto. In 2017, the company has acquired interest in or fully acquired (through completed or pending transactions) multiple businesses in Maryland and Arizona, including a management interest in Arizona-licensed Healing Center Wellness Center LLC in Ohio Valley and several other Arizona companies.

The Canadian Bioceutical Corporation also has a pending acquisition with Nevada’s GreenMart of Nevada LLC, a licensed grower, producer, and wholesaler in Las Vegas as well as interest in IMT, LLC and Fall River Developments, LLC that services Massachusetts-licensed Cannatech Medicinals Inc. through a long-term management agreement.

Why Are Canadian Companies Investing in U.S. Marijuana Businesses?

The Canadian marijuana market is more mature than the U.S. market, and recreational legalization is closer to a reality in Canada than it is in most U.S. states, so why are Canadian companies investing in the U.S. where marijuana is still illegal at the federal level?

Alan Brochstein Founder of 420 Investor and New Cannabis Ventures explains, “The reason these companies are so focused on the U.S. is because it is a larger market than Canada, and it is highly fragmented. U.S. operators struggle to raise capital, and Canadian companies are able to deploy capital that they raise in Canada into the U.S. without much competition.”

1. First to Market in a Large Market

In business, being first to market is a big advantage, so getting into early-stage marijuana markets in the U.S. where the potential number of customers is very large can give seasoned Canadian companies an opportunity to establish market leadership when competition is still limited. For example, one of the reasons Chestnut Hill Tree Farm was so attractive to Aphria is because it is only one of nine companies licensed to produce marijuana for Florida’s 21 million residents. The opportunity could be very big, and being first to market is very important.

Furthermore, from the Canadian company’s perspective, it’s easier and faster to get a business operational in the U.S. than it is in Canada, and since many things in Canada are more expensive to set up, the company’s dollars stretch much further in the United States.

At the time of Liberty Health Sciences’ acquisition of Chestnut Hill Tree Farm in Florida, Chestnut wasn’t making revenue yet and hadn’t opened any dispensary locations. The value of the company was in its marijuana license, which gave the owner early entry into the state’s cannabis market. As Liberty Health Sciences Chief Executive George Scorsis explained in an interview earlier this year, license devaluation might occur in the future as more licenses are granted and more businesses enter the Florida market, but his company believed it was most important to be one of the first entrants in the market.

When a Canadian company already owns valuable intellectual property in the marijuana industry and has already established efficient operations and processes, that company has a significant advantage when it enters the less mature U.S. market. In short, Canadian companies have significantly more experience in terms of operations, research, and development than newer U.S. companies.

For example, Aphria plans to leverage its extensive agriculture and pharmaceutical experience as well as its low-cost production methods to bolster Copperstate Farms’ marijuana business. Furthermore, Aphria will leverage its intellectual property to introduce improvements that will drive further growth for Liberty Health Sciences.

Canadian investors and companies are targeting U.S. marijuana markets that are similar to what they know and have experienced in Canada in recent years. This experience and knowledge will enable them to move quickly in establishing market positions and growing revenues.

When iAnthus Capital acquired valley Agriceuticals LLC, it did so knowing that the New York marijuana market was very similar to Canada’s marijuana market just one year ago in terms of the number of patients and the small number of competitors.

Bottom-line, investing in or acquiring a company in a market that is similar to one that is already known and understood can significantly reduce risk and increase rewards.

The Value is in the Marijuana License

Why are Canadian investors and companies investing in and acquiring U.S. marijuana companies? The answer is opportunity. However, it all starts with a marijuana license. When a seasoned Canadian company in the marijuana industry acquires a U.S. marijuana company that isn’t making any money yet or is barely breaking even, they’re really buying a license and an opportunity, and that’s probably more than enough.