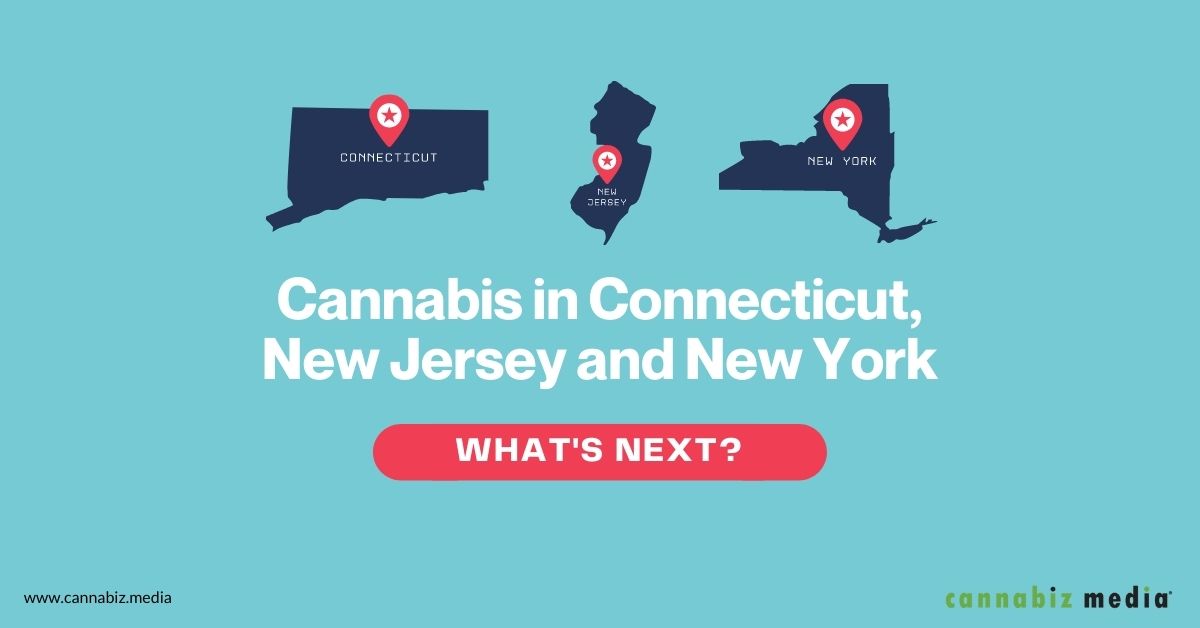 Cannabis in Connecticut, New Jersey, and New York: What’s Next?

The 2020 election, now well over a year in the rear-view mirror, was a unique benchmark for the cannabis industry. Multiple states with existing medical cannabis programs saw their voters approve adult-use legalization measures, including Montana, Arizona, and New Jersey. Arizona launched sales to adults in less than two months, and Montana took roughly a year to finalize legislation and rulemaking for a 2022 launch.

On the east coast, New Jersey took a similar path — voters approved legalization in the form of a constitutional amendment but left the details to the legislature and, eventually, regulators. Prior to the election, industry observers (myself included) suggested that New Jersey voters would push the first domino toward legalization for a region with a population of nearly 50 million people.

The approval of New Jersey’s Public Question 1 did serve as a trigger for adult-use legislation in other nearby markets — so far, including New York and Connecticut. Both states saw long-awaited legislation signed into law, while other neighbors, including Rhode Island, Pennsylvania, and Maryland, are seeing continued progress. This article will review the status of Connecticut, New Jersey, and New York on their pathways to licensing and sales launches.

After a few years of discussion, Connecticut’s legislature passed adult-use legislation in June. The state currently has a steadily growing medical cannabis program with limited license availability due to statutory caps. Recent market growth has been a driver for merger and acquisition activity.

Political pressure ensured the state’s new program included social equity provisions, making Connecticut an industry leader for social equity licensing. Additionally, some applicants will be eligible for an assistance program outlined in a technical assistance plan, as they get their operations planned and launched, and could eventually also receive financing support.

After over six months of rulemaking progress, the state recently announced an initial series of licenses available. The state will have nine license types (see table below), including two subsets of cultivation and retail, three subsets of manufacturing and packaging, distribution, and delivery.

One of the cultivation license types is Disproportionately Impacted Area Cultivator licenses, which does not have a license cap or limit. Half of each license type’s licenses will be reserved for social equity applicants, while the remaining licenses are available to the general public.

The state’s regulatory Commissioner remarked that the initial application period is not a cap but a starting point — many more license allotments will be announced, possibly through similarly scheduled application windows.

New Jersey regulators made an unusual move in late 2021. The 2020 election triggered adult-use legalization via a constitutional amendment, which was followed by the Cannabis Regulatory, Enforcement Assistance, and Marketplace Modernization Act (CREAMM Act).

While the state’s Cannabis Regulatory Commission was navigating the rulemaking process, they also expanded the existing medical cannabis market by awarding 24 additional dispensary, cultivation, and manufacturing licenses. The legacy program’s licenses will form the backbone of the new industry with 37 cultivation and production licenses reserved for only existing medical businesses until early 2023.

In the meantime, regulators opened applications for three license types in December (cultivator and manufacturer, including microbusinesses, as well as testing laboratories). In March, retail applications will open up — this number is not limited by the state, but store counts may be capped by municipality or county.

The CREAMM Act also established the Office of Minority, Disabled Veterans, and Women Business Development, which operates a social equity program. Application priority is available for minority-owned, woman-owned, or disabled veteran-owned businesses in addition to individuals living in economically disadvantaged areas or who have cannabis-related offenses. Social equity impact zones were also established.

In the spring of 2021, former Governor Andrew Cuomo signed the Marihuana Regulation & Taxation Act into law, which created the regulatory Cannabis Control Board and Office of Cannabis Management. The bodies have taken control of the state’s existing medical cannabis program as well as the cannabinoid hemp program from the state's health department.

The Department of Agriculture and Markets maintains control of hemp cultivation under the state’s USDA cultivation plan, but the state’s cannabis and hemp regulatory systems are more integrated than most other states’.

New York’s cannabis outlook is more long-term. Last November, the Cannabis Control Board chair, Tremaine Wright, indicated that the state’s cannabis market would not be launching for 18 months, or sometime in 2023. This establishes a timeline for rulemaking that comprises nearly all of this year, possibly running into early 2023, before initial cultivation and manufacturing licenses are awarded, followed by retail licenses and a sales launch.

More recently, Chair Wright revised her outlook suggesting licenses may be available sooner. Regardless of the launch date, the state’s nine MSO-controlled medical cannabis operators, including Curaleaf, Columbia Care, MedMen, and Vireo, will emerge as the early winners.

While rules are a work in progress, the list of available license types has already been developed. Adult-use cultivators, nurseries, processors, distributors, cooperatives, microbusinesses, retail stores, consumption sites, and delivery licenses (see below) will join existing legacy medical cannabis registered organizations, which are vertically integrated. At this time, there are no caps on the number of licenses, but there are barriers to vertical integration, with exceptions.

Soon, legacy medical license holders will be able to double their retail footprint from four stores to eight. Additionally, medical cannabis patients who shop at existing dispensaries will benefit from one of the Cannabis Control Board’s earliest actions during their inaugural meeting last October when flower sales were permitted for the first time.

As in Connecticut, half of all licenses awarded will be issued to social equity-qualified applicants, but New York’s definition is much larger and includes farmers and veterans in addition to minority and women applicants.

A New Year’s Eve deadline gave cities and towns statewide the opportunity to opt out of cannabis licensing and sales, while possession remains legal statewide. According to the Rockefeller Institute of Government, nearly 47% of communities in the Empire State have opted out of permitting dispensaries, while 54% have opted out from allowing consumption sites. They’ll be able to opt in later, but in the meantime, they’ll miss out on some tax revenue.

Meanwhile, New York’s Native American tribes are beating state regulators to the punch. T wo tribes have already broken into the industry. The Shinnecock Indian Nation recently announced a partnership with TILT Holdings, Inc. to establish Little Beach Harvest, a cultivation and production facility as well as retail and consumption spaces in Southampton on Long Island. Elsewhere, the Saint Regis Mohawk Tribe is opting to license private businesses to cultivate and sell cannabis upstate — with three conditional cultivation licenses awarded in December.

Existing license caps have helped multi-state operators and other businesses thrive and expand their operations. While rulemaking continues in these three states, keep an eye out for additional business acquisition activity. Regulators in New Jersey are accepting applications, and Connecticut is preparing to do so. New Yorkers will probably wait the longest for stores to open for sales.

As soon as New Jersey and Connecticut license existing medical operations for hybrid (adult-use) operations, they could permit early sales at medical dispensaries once a reliable product supply is available. A clearer timeline is expected in the next two or three months. And in the meantime, tribes will continue to enter the industry through partnerships or private business licensing.

In addition to these three states, nearby Vermont is preparing regulations for an adult-use launch this fall, and Rhode Island’s legislature is also having discussions to move from a medical-only market to adult-use. For a significant portion of the eastern United States, a new era in cannabis is on the horizon.