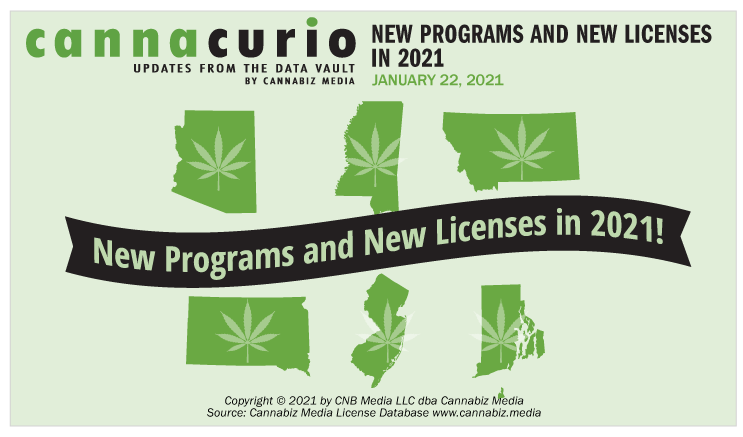 New Programs and New Licenses in 2021

A year ago, I started writing Cannacurio blog posts where I dug into the “data vault” and shared what I hoped were interesting insights about the data. Topics included new hemp programs, violations as well as the more straightforward license tracking.

The latter topic proved to be most popular as Cannabiz Media shared the total number of licenses issued by every state for activities like dispensing, manufacturing, and cultivation. The onslaught of requests we received from our investment banking and MSO clients has helped us tweak these posts and enhance our reporting module.

The November election ushered in new programs in five states – and that certainly means new licenses. The unknown questions are how many and when. Here is what our team has discovered thus far:

Applications for existing medical cannabis operators who want to enter the recreational market opened on January 19 and close on March 9.  In their January Draft Rulemaking the state outlines the process for applying and allocating licenses. While experts predicted that licenses would be issued in March, 86 licenses were announced on January 22 with sales on the same day.  There are an additional 26 social equity licenses that will be issued at some point later in 2021.

MSDH is currently working to establish production, regulation, and licensing structures in time for the target date of August 15, 2021. Initiative 65 requires that regulations for all aspects of the program, including production and licensing for sale, must be in place by July 1, 2021.

October 1, 2021, is the deadline for the Department of Revenue to establish rules and regulations and begin accepting and issuing applications for dispensaries. Sales for adult use marijuana will begin in Calendar Year 2022. For the first 12 months after the department starts accepting applications for licenses, only current medical marijuana providers, medical marijuana infused products providers, and dispensaries may apply.

The sale, possession, and use of recreational and medicinal marijuana are set to become legal in South Dakota on July 1, and the Department of Revenue has until April 1, 2022 to have regulations in place to begin accepting applications for establishments. The Department of Revenue does not anticipate accepting marijuana licensing applications prior to sometime in 2022.

The state is still trying to figure the path forward. After the election, they talked a big game about selling cannabis to consumers in December. That has not occurred. Competing bills have been introduced, and the process may drag on.

The bill limits cultivation licenses to 37 for the first two years. The limit does not apply to micro-licenses facilities with 2,500 square feet or less and fewer than 1,000 plants.

Under the radar, Rhode Island is also planning to add six more licenses to the three that already exist. Applicants were announced on Christmas Eve 2020, and the applications were shared a few weeks later.

In reviewing these states, it appears that Arizona is best poised to expand their program. Like other states before them, they are awarding new recreational licenses to existing medical license holders. While this does not expand the pool of people that will own the license, it likely ensures a smooth rollout in that both the regulated and the regulator know what to expect.

Mississippi and Montana both seem up to the challenge that the voters set for them with aggressive deadlines for regulations and licensure. Sadly, New Jersey and South Dakota appear to be heading down the tried and true lawsuit rabbit hole. We have seen these situations delay all sorts of programs – lets hope they figure it out.

Rhode Island will be an interesting one to watch as Governor Raimondo may become part of the Biden administration and that may help simplify the program. Her latest budget called for a scheme where the stores would be run by private contractors with the state controlling the location, price, potency and quantity of sales while taking 61% of net revenue. The private operators would get 29% of the profits and the host municipalities 10%.