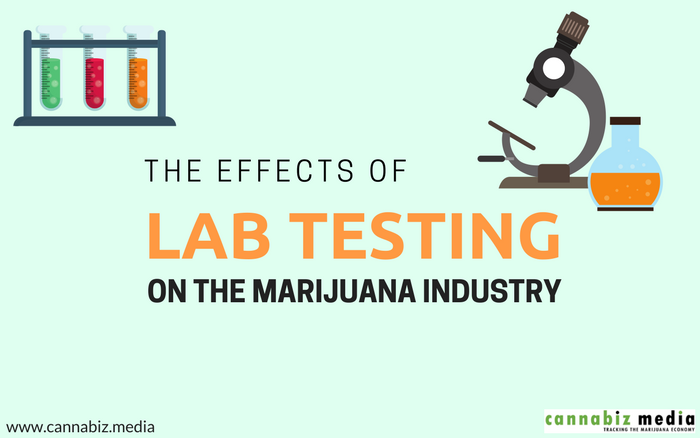 The Effects of Lab Testing on the Marijuana Industry

Marijuana testing labs will be worth $1.4 billion by 2021 based on High Times’ estimation, which represents an annual growth rate greater than 10%. Sounds good, right?

In an industry where high product prices can push consumers to the black market, marijuana businesses must continually look for ways to keep costs down. However, when the product being sold can be contaminated, which could lead to consumer illness and death, regulators naturally want cannabis growers to pay for expensive lab testing of their products.

And that’s the problem.

Testing is expensive and far from perfect in today’s marijuana industry. It doesn’t necessarily keep patients and consumers safe, and it drives costs up for marijuana businesses and ultimately, end users.

In other words, the problems related to marijuana testing have far-reaching effects. Let’s take a closer look at some of those problems and effects.

Lab testing costs money, and in an industry where many businesses aren’t generating large sums of profits yet, adding expensive product testing can cause higher product prices for consumers.

Furthermore, many states have very few approved testing laboratories. When testing is required too frequently and labs can’t keep up, cultivators often are unable to deliver enough product to dispensaries. This leads to more demand than supply.

When prices are too high or supplies can’t meet demands, consumers are more likely to purchase marijuana illegally. Licensed businesses lose sales and consumers could get lower quality product. Everyone loses.

Since marijuana is still illegal at the federal level, only a small amount of money is set aside for cannabis research. Therefore, we know very little about how contaminants affect marijuana products or the people who use those products.

As a result, no one truly knows what they should be testing marijuana for, what factors are actually “bad” indicators, and what should be allowed, banned, or limited. Each state’s regulators have created their own lists of contaminants, such as pesticides and mold, which labs are required to look for when testing marijuana samples. Unfortunately, no one really knows if those are the contaminants they should be testing for or not.

Furthermore, different states test for different contaminants since there are no federal standards. For example, Oregon’s testing labs are not required to conduct heavy metal or biological testing. California just began requiring heavy metal testing in January of this year.

Even if labs are certified by an organization like the International Organization for Standardization (ISO), that certification simply means labs are following the same testing processes. It doesn’t mean they’re conducting the right tests in the right ways.

No Set Standards and Procedures

This problem was analyzed in a 2015 study published in the Journal of the American Medical Association which found 87% of the edible samples that researchers tested in California and Washington included 10% or more active ingredients per milligram than what was stated on the edibles’ package labels.

Since there are no set standards and procedures, different states test for many contaminants in a variety of ways. Also, some states use pharmaceutical product testing as a model for marijuana testing while others use agricultural product testing processes.

In a January 2019 report from Oregon’s Secretary of State Dennis Richardson, results from an audit of cannabis testing labs showed that a lack of testing standards and procedures is a significant problem in the state. For example, medical marijuana provided directly to patients from growers isn’t tested at all. In addition, there is no verification process in place to confirm the accuracy and integrity of test results.

In addition to the inconsistent results discussed above related to no set standards and procedures for labs to follow, some inconsistencies in testing results are leveraged by industry players to push alternative agendas. For example, cultivators in some states are allowed to choose the marijuana samples that they send to labs for testing, which means they can affect their testing results by choosing their best samples. This leads to inadequate results for consumers.

Inaccuracies and inconsistencies also affect consumers based on the lab that does the testing. If two labs are known for producing very different results related to the amount of THC found in marijuana products, a cultivator might choose the lab that provides higher THC level results since many consumers want higher THC levels in their marijuana products.

Josh Drayton of the California Cannabis Industry Association has stated it’s an open secret that certain companies pay a lot of money for favorable lab testing results, and the state needs to do more to create standards and procedures.

Another example is when a lab intentionally misreports testing results. A study conducted by Harvard University PhD student Michael Zoorob and Leafly’s principal research scientist, Nick Jikomes, found that labs in Washington State often overreport THC and CBD levels to retain customers who are looking for specific results regardless of accuracy.

The same thing is happening in other states, including Oregon where the January 2019 audit report from the Secretary of State found that some growers and processors used up to nine different labs to test their products between January 2017 and July 2018. It’s not a big leap to assume some were searching for the lab that gave the “best” results.

A different type of misreporting occurred in December 2018 when California Bureau of Cannabis Control inspectors discovered that Sequoia Analytical Labs in Sacramento failed to test for 22 of 66 required pesticides and contaminantsbetween July and November 2018. The lab forfeited its license and all cannabis it had tested during that time, which wasn’t already sold to consumers, was recalled and destroyed.

Marijuana testing can also benefit big businesses over small businesses. According to Pew Charitable Trusts, larger growers can generate greater economies of scale when moving many small batches of samples through a testing facility compared to smaller businesses. The cost per gram for testing is much higher for smaller cultivators.

How to Fix the Marijuana Testing Problem

Fixing the problems related to marijuana testing that have such widespread effects on the entire cannabis industry will take time, but it can be done. The first step is to develop a set of standards and procedures for all cultivators and labs to follow to ensure results are accurate and comparable between labs.

The next step is accrediting labs and monitoring them closely to ensure they’re following those standards and procedures. If a lab cannot achieve consistent results, it should not be allowed to operate in the industry. In other words, labs should be held accountable for the results they’re providing.

The final two pages of the Oregon audit report mentioned earlier in this article includes 15 recommendations to improve the accuracy of both testing labs and test results in the state. The Oregon Health Authority (OHA), which oversees the state’s medical cannabis program and cannabis lab testing rules, has agreed to implement most of the recommendations. It will be interesting to see how things develop once the OHA takes action.