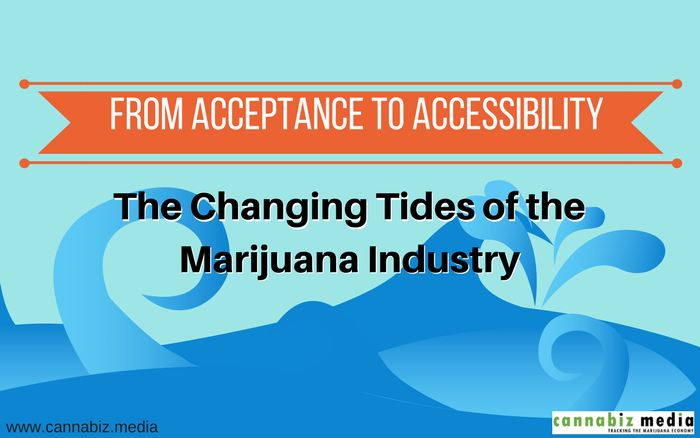 From Acceptance to Accessibility – The Changing Tides of the Marijuana Industry

With the growing acceptance of cannabis in the United States, accessibility has increased as well as more states legalize medical and/or recreational marijuana.

However, legalization of cannabis for medical and/or recreational use doesn’t automatically mean that people will be able to access it.

Growing Acceptance of the Business of Marijuana

Not only do consumers want access to marijuana products, but businesses and residents who understand that the marijuana industry benefits states and communities through job creation and taxes want it as well. In other words, consumers, investors, and regulators are all becoming more accepting of marijuana.

According to Vangst, the cannabis industry’s leading hiring platform, the number of cannabis job listings increased by 690% between January 2017 and August 2018, and salaries increased by more than 16%.

It’s important to note that the 2025 projected tax revenue assumes only states where marijuana is currently legal. In The U.S. Cannabis Report 2019 Industry Outlook, New Frontier Data predicts the total U.S. cannabis industry will grow to $30 billion by 2025. Medical sales will reach $13.1 billion and adult-use sales will grow to $16.6 billion by 2025. That equals a lot of tax revenue for states with thriving markets.

Acceptance Does Not Always Equal Accessibility

Despite what the data shows in terms of the growth in marijuana acceptance in the United States, accessibility to purchase marijuana still has a long way to go. In total, 33% of states have yet to legalize medical marijuana, and 76% if states haven’t legalized recreational marijuana.

In addition, rules and regulations limit accessibility in states where medical and/or recreational marijuana have been legalized.

Cannabiz Media has identified many barriers to marijuana accessibility that not only affect consumer access but also affect the overall success of a state’s marijuana program. These barriers can vary from state to state. Some examples include:

Each of the above obstacles limits Americans’ ability to access medical marijuana and the ability of cannabis businesses to compete freely. Some obstacles also unnecessarily affect supply and demand, which creates an economic imbalance that either leads to product shortages or price increases – both of which have negative effects on consumer accessibility. However, research shows that the majority of Americans want marijuana to be accessible for medical and recreational use.

Unfortunately, there is still a sizable gap between marijuana acceptance and acceptability in the United State. When you consider how the tides have changed for the marijuana industry in terms of public opinion, it’s not a stretch to assume Americans will eventually demand that many of these obstacles are removed to provide greater accessibility. In fact, it’s very likely that we’ll see them voice their demands at the polls in states that have cannabis initiatives on upcoming ballots.