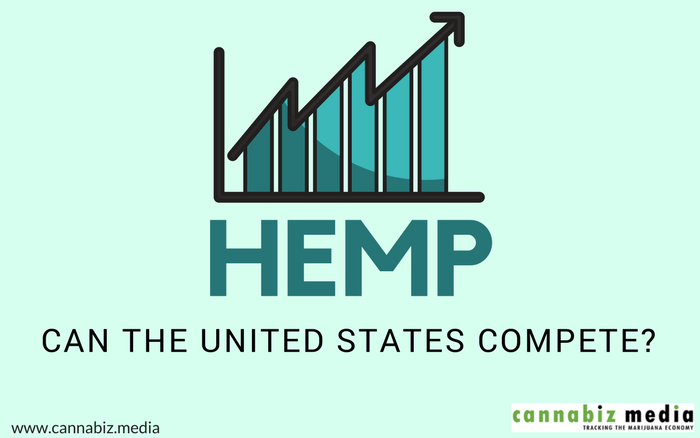 In 2018, 23 states grew hemp in the United States for a total of 78,176 acres of crops, and the U.S. Department of Agriculture (USDA) expects that number to more than quadruple in 2019. While that’s a significant increase from just one year prior when only 25,713 acres of hemp crops were grown and from two years ago when just 9,770 acres of hemp crops were grown, the U.S. is still significantly behind in the hemp industry compared to other countries.

Hemp is grown in approximately 30 countries. China is the largest hemp producer and exporter in the world and is responsible for an estimated 1/5 of total global hemp production. Other hemp producing countries include Canada, France (the largest producer in the European Union), Spain, Austria, Australia, and Russia. Prior to the passage of the 2018 Farm Bill, the United States imported approximately $600 million of hemp products each year, because hemp could only be grown in states that had approved pilot or research programs.

Hemp began its resurgence in Europe in the 1980s, and Australia has been growing it for 20 years. It was legalized in Canada in 1998. In comparison, the U.S. only passed the Farm Bill in 2014, which allowed states to launch hemp cultivation programs for research and development only. And it wasn’t until the 2018 Farm Bill passed in December 2018 that cultivators, processors, and so on could start getting hemp licenses where states would allow them. However, hemp is still only grown in fewer than half of the states in the country.

Bottom-line, the U.S. is decades behind many other countries and has a lot of catching up to do. Here are a few obstacles the U.S. has to overcome to be competitive in the global hemp market:

The 2018 Farm Bill was passed in December 2018, but the U.S. Department of Agriculture still hasn’t released federal hemp production rules, which the industry needs to prepare for the 2020 growing season. The rules will address testing, transportation, seed sourcing, and more.

However, the rules are interim, which means they could (and most likely will) change before final regulations are released for 2020. Once the federal rules are released, states and local municipalities will need to modify their own rules to be in compliance.

While countries with established hemp industries have their supply chains in place and have worked out many of the kinks, the U.S. has no such supply chain in place. For many U.S. farmers, growing hemp is easy, but selling it might not be. Farmers need a network to process materials or they can’t be certain they can turn a profit from a hemp crop.

The U.S. hemp market is expected to grow to $1.8 billion by 2020. Supply chain infrastructure needs to be in place to meet growing demand domestically but also for the U.S. to become competitive in the hemp market on a global scale. One of the biggest early problems is related to interstate hemp transportation, which has already prompted multiple lawsuits.

Since hemp has been illegal in the U.S. for so long, cultivators and scientists haven’t had access to it on a large scale, which means the U.S. is lagging behind other countries in genetics and breeding research. As with other agricultural industries, the hemp industry needs access to stable seed genetics.

Despite the fact that hemp is now legal in the U.S., hemp license holders continue to face roadblocks when it comes to banking and insurance. As of mid-2019, many banks and credit card processors still view hemp businesses as high risk.

The same is true of insurance providers. While the USDA’s Risk Management Agency announced insurance coverage for hemp grown for fiber, flower, or seeds under the Whole-Farm Revenue Protection (WFRP) program, it’s only available to producers in areas that are covered by USDA-approved hemp plans or to producers that are part of state- or university-approved research pilot programs. For other hemp license holders, insurance is either difficult or impossible to get.

The Big Question for Hemp in the U.S.

Things are moving quickly in the U.S. hemp industry since the 2018 Farm Bill passed, and once the USDA releases its final rules for the hemp industry, things will move even faster. However, industry experts warn that the U.S. is already growing 8-times the amount of CBD hemp it can consume, and as a result, prices are crashing.

With a late start to the hemp industry and a litany of strict regulations, is it too late for the U.S. to effectively catch up to and compete with China, Canada, France, and other countries with far more experience, looser regulations, established infrastructure, and existing demand?