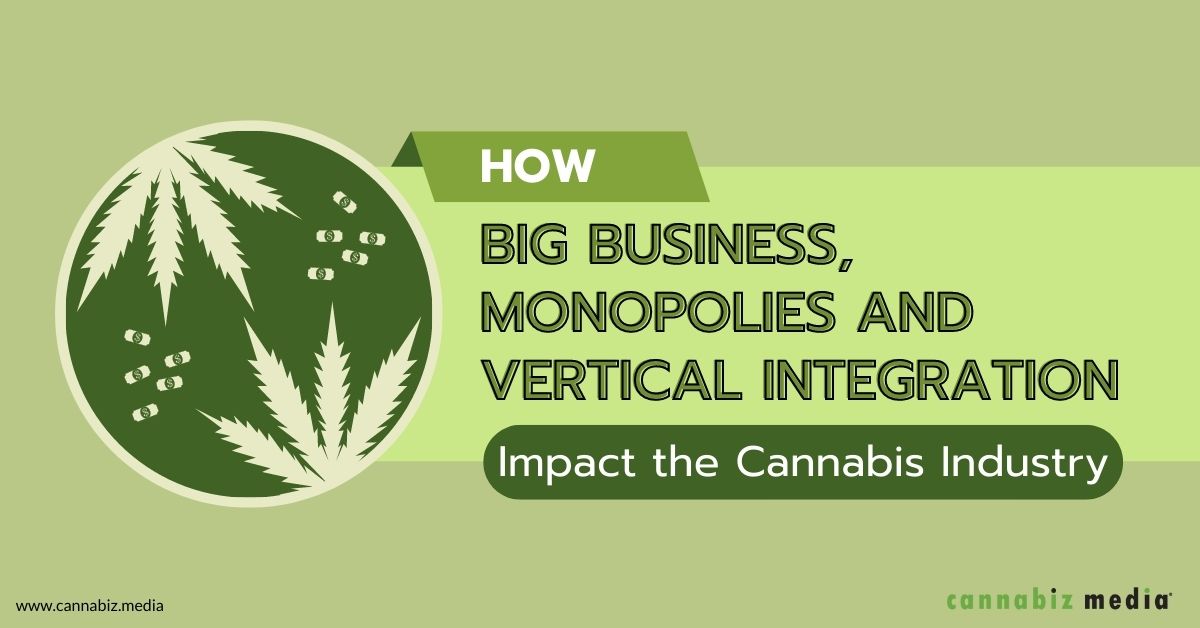 However, the continued growth and development of big businesses with deep pockets in the cannabis industry has many people worried that the result of continued mergers and acquisitions will be monopolies, lower quality products, and a shift of revenues away from mom and pop businesses in local communities to out-of-state (or out of country) corporations.

This concern has already evolved into a reality and will continue to become an even bigger problem as state programs expand, when interstate commerce is allowed, and when federal legalization happens.

The Start of Monopolies and Oligopolies in the Cannabis Industry

Monopolies and oligopolies started developing years ago in the cannabis industry — not just in terms of big businesses usurping smaller businesses but also in terms of state regulations that allow vertical integration, which leads to markets dominated by one or a few players that control the cultivation, processing, and sale of cannabis products.

Another way monopolies and oligopolies have an opportunity to develop in the cannabis industry happens when states cease awarding licenses. In California, oligopolies formed in a different way. Regulations passed leading up to opening the state’s adult-use market in 2018 allowed large businesses to exploit a loophole and obtain as many cultivator licenses as they could afford.

According to data from Cannabiz Intelligence™, a handful of cannabis license holders dominate multiple markets across the United States. In fact, 10 public companies each hold more than 100 licenses – some with more than 200 licenses – and have operations in as many as 22 states. These 10 companies hold licenses across the supply chain, and some report total quarterly revenues exceeding $300 million.

Based on the data, it’s not surprising that smaller cannabis businesses across the country are struggling to compete with bigger cannabis companies.

“If we wait until there already is a monopoly that’s acting like Big Tobacco, it’ll be too late. What we have to do is be intentional about preventing it in the first place,” says Shaleen Title, former commissioner of the Massachusetts Cannabis Control Commission, current CEO of the Parabola Center (a drug policy think tank), distinguished fellow in cannabis policy at the Ohio State University College of Law’s Drug Enforcement and Policy Center, and vice chair of the Cannabis Regulators of Color Coalition.

This year, Title released a report that drew attention to the growing problem of monopolies in the cannabis industry, Bigger is Not Better: Preventing Monopolies in the National Cannabis Market. In the report, she proposed a number of steps that should be taken to improve competition in the cannabis industry when federal legalization happens. Her suggestions include:

Title says, “The rise of MSOs is a sign that antitrust issues are timely and must be considered by regulators sooner rather than later.” In other words, waiting until after cannabis is legalized at the federal level to develop antitrust regulations will be too late.

The Future of Marijuana and Big Business

Bottom line, whenever every business that wants to be in an industry cannot enter the market, competition will not flourish. The result is the same whether businesses are shut out due to state regulations or because big businesses have deeper pockets and force smaller players to leave. Either way, the result is the same. Fewer players equals less competition which usually leads to higher prices, fewer product choices, and limited market growth.

As Sean Williams of The Motley Fool warned the cannabis industry back in 2017, “As with any industry, if big business can push the little guy out, they’ll have considerably more liberties down the road to raise their prices back up and capture a juicier margin, along with greater market share.”

Only free competition ensures fair prices and market growth over the long-term as well as ongoing innovation and product accessibility. That’s how to protect the “community” culture of the cannabis industry and prevent Big Cannabis from developing (similar to Big Tobacco and Big Alcohol) where a few companies control the market.