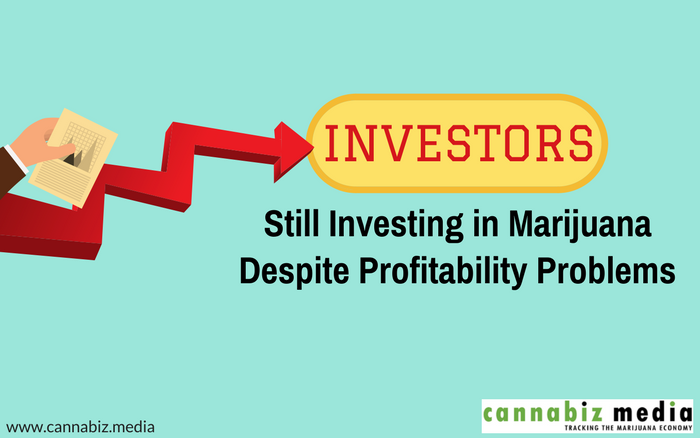 I have a great investment for you. There is a great industry that you can invest in and earn tons of money in the future. Unfortunately, most businesses in the industry aren’t making a lot of money yet, and no one knows when they will. Don’t let that sway you though! There are so many analysts saying it’s going to be huge in five or so years.The bad news is the product is illegal at the federal level. However, it’s allowed in some way in dozens of states – although it’s often more expensive and harder to get it legally in those states than it is to buy it on the black market. Don’t worry about that though. Trust me – this is the investing opportunity you’ve been waiting for!Would you invest?Chances are you’d run away if you got that pitch. However, that’s exactly what’s happening in the marijuana industry, yet investors continue funneling money into it.

Investing Blindly in the Marijuana Industry

For investors who are putting their money into the marijuana industry, they’re investing in projected growth potential. This is a market that sources like ArcView Market Research predicts will grow to over $21 billion in fewer than five years, and at full legalization across the country, investment firm Cowen & Co. predicts the cannabis market could grow to over $50 billion by 2026.Considering the marijuana market generated about $10 billion in sales in 2017 (a 33% increase over 2016), the projected growth rate doesn’t seem unattainable. And keep in mind, that’s still a drop in the bucket compared to the $211.6 billion alcoholic beverage industry in the U.S.There is no doubt that such a growth rate will attract the attention of investors, but there is more than meets the eye in the marijuana industry. This is an industry where businesses struggle to get bank accounts and can’t get the same tax breaks that businesses in other industries enjoy because marijuana is still illegal at the federal level.Furthermore, nearly two out of three (64%) of Americans now support marijuana legalization and demand is up, but businesses in the industry still have trouble meeting that demand due to restrictive regulations and supply chain obstacles. To make matters worse, many are struggling to do so profitably.Despite all of these red flags that would make investors flee from other industries, they’re flocking to marijuana. From Florida, Pennsylvania, Maryland, and more, investors want in! Investors big and small are investing in cannabis businesses across the country. For example, Oakland, California’s Gateway, a cannabis business incubator, boasts investors from Oracle, Facebook, and SpaceX.From PayPal founder Peter Thiel to Roger Jenkins of Barclays Plc, lawyers, politicians, law enforcement officials, celebrities, and more, there is no shortage of people who want to invest in the marijuana industry. Just this month, Thiel’s Privateer Holdings, a private equity firm focused on the cannabis industry, closed the single largest raise in the U.S. marijuana industry - $100 million in Series C funding.

Others are taking a less risky route by investing in metaphorical picks and shovels. Back in 2016, JPMorgan recommended that investors invest in Scott’s Miracle-Gro since the company made hydroponics, which marijuana growers need. In fact, it’s these ancillary marijuana businesses that are actually making money today.For example, venture capital firm Benchmark Capital, which claims some responsibility for the success of Dropbox, Uber, Twitter, and Instagram thanks to its early investments, entered the marijuana industry last year when it invested in Hound Labs, a company that is developing a breathalyzer for marijuana.Savvy investors are choosing the safer route by putting their money into ancillary products and services, real estate, technology, intellectual property, and licensing. Just like the Colorado Gold Rush, the Marijuana Gold Rush is on, and the early winners are companies selling picks and shovels to marijuana businesses.

Weighing the Risks and Rewards of the Marijuana Industry

Clearly, the marijuana industry is not an investment opportunity for the risk-averse, but for those people who can see the potential rewards, the risk might be worth it. This is still a highly-regulated business filled with obstacles, but you can’t stop progress. The industry isn’t going away.The biggest long-term risk for potential investors at this point isn’t what happens if the legalization trend reverses but rather, what happens when big-pharma and other big companies with deep pockets finally enter the industry?Originally published 6/14/17. Updated 2/1/18.